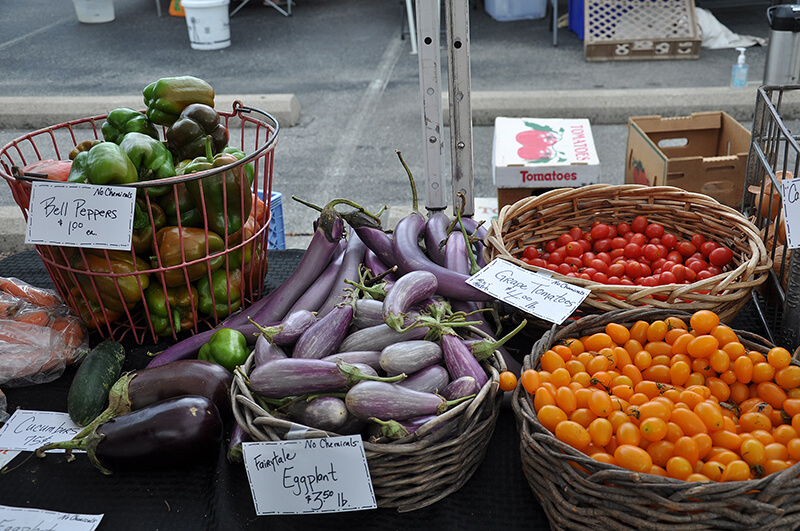 Access to markets and difficulty with the process lead some Midwestern farmers to decertify from the USDA's organic program, according to a Purdue University study. Some continue to use organic practices but have found that they can still obtain premium prices through farmer’s markets and community-supported agriculture sales. Download image

WEST LAFAYETTE, Ind. - Midwestern fruit and vegetable farmers are more likely than their counterparts in other regions to give up federal organic certification, according to a Purdue University study. Access to organic markets and consumers as well as the demands of obtaining and retaining certification seem to be the most significant drivers of their decisions.

Obtaining U.S. Department of Agriculture organic certification can be an expensive, year-long process that requires changing management practices and working with certifiers who determine if farms meet the government’s extensive requirements. But that’s worth it for many farmers who can command higher prices for organic products since demand has been rising quickly over the last decade.

In 2017, organic food sales topped $45 billion — up 6.4 percent from 2016, according to the Organic Trade Association. Sales have more than doubled since 2010. Fruits and vegetables are the top-selling category, making up nearly 37 percent of organic food sales.

“Consumers are demanding more organic fruits and vegetables, so there is a push to certify more farmers,” said Ariana Torres, a Purdue assistant professor of agricultural economics and horticulture & landscape architecture and co-author of the study. “There’s been a lot of money invested from the federal and local governments to get more farmers organically certified. The decision to decertify can have an effect on those programs, organic food supply and the bottom lines of farmers who spend so much to get into the program in the first place.”

Despite the boom in demand, the number of organic farms has declined from 14,540 in 2008 to 12,818 in 2015. Some of that is due to consolidation of small and medium farms into larger operations. But some operations are simply leaving the organic program.

Torres and Maria Marshall, a Purdue professor of agricultural economics, published their findings in the journal HortScience. Data are based on more than 1,500 farmer surveys.

Of the 234 farms that were or had been organic at some point, the authors find that 36 percent had dropped certification. Large- and medium-sized farms were less likely to decertify than small farms. These farms may be able to produce enough volume of fruits and vegetables to access high-value, high-volume markets.

That may be because fewer of the smaller organic farms are located near markets that would purchase large quantities of organic produce. Transportation to larger population centers may be less cost-effective for small organic farms.

Also, many farmers who decide to opt out are likely selling their organic produce directly to consumers through farmer’s markets or community-supported agriculture programs.

“Your customers know how you farm in those situations,” Torres said. “The farmers don’t need that tag to say the farm is USDA certified. The farmers just need to have a good relationship with the buyers.”

In California and the Northeast United States, where decertification rates are lower, access to large markets likely keeps farmers in the program because they need certification to obtain premium prices.

“If you’re a larger operation or selling to supermarkets, that requires you to be certified organic,” Marshall said. “But if you’re selling close to home, directly to consumers, you’re probably more likely to decertify.”

Organic farmers were also likely to opt out of certification if the process became too much of a hassle.

“That may be something that lawmakers may want to keep in mind,” Marshall said. “We want to maintain as many organic farmers as possible. Maintaining them is a lot less costly than certifying new ones.”

“If we want to incentivize farmers to remain certified, we probably want to support the access to markets,” Torres said. “If you’re small enough and can’t reach the market, programs that group certified small farms together to get them better access to large markets could be helpful.”

The USDA-National Institute of Food and Agriculture Organic Research and Education Initiative supported the research.

Identifying Drivers of Organic Decertification: An Analysis of Fruit and Vegetable Farmers

Little is known about the drivers of organic decertification and it is unclear what production practices farmers adopt after decertification. This article investigated how farm demographics and characteristics, sources of information, and perceptions influence a farmer’s decision to decertify. The data for this article were from a 2012 web-based survey of fruit and vegetable farmers that were part of the Food Industry MarketMaker database. We used a robust probit regression to identify the drivers of organic decertification of fruit and vegetable farmers in the U.S. Demographics; farm’s characteristics, sources of information, and farmer’s perceptions were key factors influencing the decision to decertify. Finding useful information from price reporting services and certifiers decreased the probability to decertify. On the other hand, farmers located in the Midwest, those selling vegetables, and those perceiving the organic certification process as a barrier were more likely to decertify.