Called the Social Media Analytics and Reporting Toolkit (SMART), the browser-based platform filters social media content according to key words and geographic regions defined by the user. First responders have been using a beta version of the tool to analyze both live and historical data. Purdue researchers will present new SMART features on Thursday (April 26) at the Association for Computing Machinery CHI 2018 Conference on Human Factors in Computing Systems.

In 2012, VACCINE began developing a large-scale, streaming source of social media data that could also show a distribution of tweets and posts for a given area – a feature lacking in other social media analytics tools that law enforcement agencies had tried using. Purdue researchers have since added more features to SMART as users tested the tool during crime investigations, the 2017 hurricanes and public events such as football games and the 2018 State of the Union Address.

“We keep a long-term relationship with our end users,” said Jiawei Zhang, a Ph.D. candidate in ECE who has often served as tech support for SMART. “After an event we’ll do a workshop with them to identify any problems they faced and potential features they think will be useful for the system.” 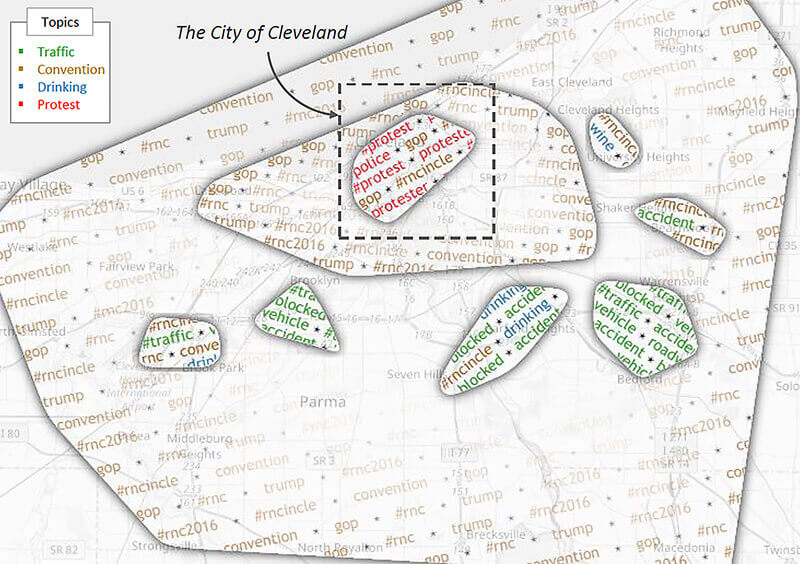 Purdue engineers have developed a social media analytics tool that helps first responders to better monitor an area, such as the city of Cleveland, Ohio during the 2016 Republican National Convention. (Purdue University image/Jiawei Zhang) Download image

To help break down various interpretations of a situation, Zhang has made several improvements to the user interface, such as “cluster lense” and “TopoText,” which visualize key words from themes a user defines in a geographic area. Dominant crime, for example, may be theft and robbery in a city; or it may be liquor law violations and noise for a university campus. Watch a YouTube video explaining how SMART works at https://youtu.be/ZKPWdW0y1Og.

Another feature is customizable email alerts. “If, for example, a key word came up more than five times in ‘x’ amount of minutes, then the user will get an email alert,” said Chittayong “Jao” Surakitbanharn, a postdoc who worked on SMART through Purdue’s ECE school. Users can also request a summary email of tweets or posts related to key words they input to SMART.

In the works is a way to automatically filter photos and text – especially since social media has the potential to provide useful information to first responders when public cameras go offline during natural disasters. VACCINE researchers have started comparing tweets and posts with public camera feeds to understand the utility of social media during these incidents.

Other issues are still to be resolved. Homonyms, for example, create “noise,” or bring up irrelevant posts. “The word ‘kill’ is used in a lot of different scenarios, like ‘I killed that exam’ or ‘this pain is killing me,’” said ECE graduate research assistant Calvin Yau.

Researchers have expected these challenges in converting a new technology into an emergency alert system. “The telephone was invented in the 1800s. By the time you have the 9-1-1 system, that’s the 1960s,” Surakitbanharn said. “Now if we dial 9-1-1, we definitely expect someone to help us. But on social media, there has been no pre-designed system.”

Prairie View A&M University, a partner of VACCINE, is helping to address another key fact: Not everyone uses social media. The university is researching the adoption of social media technology by minority communities in the Houston area to provide insight for the use and development of technologies like SMART. 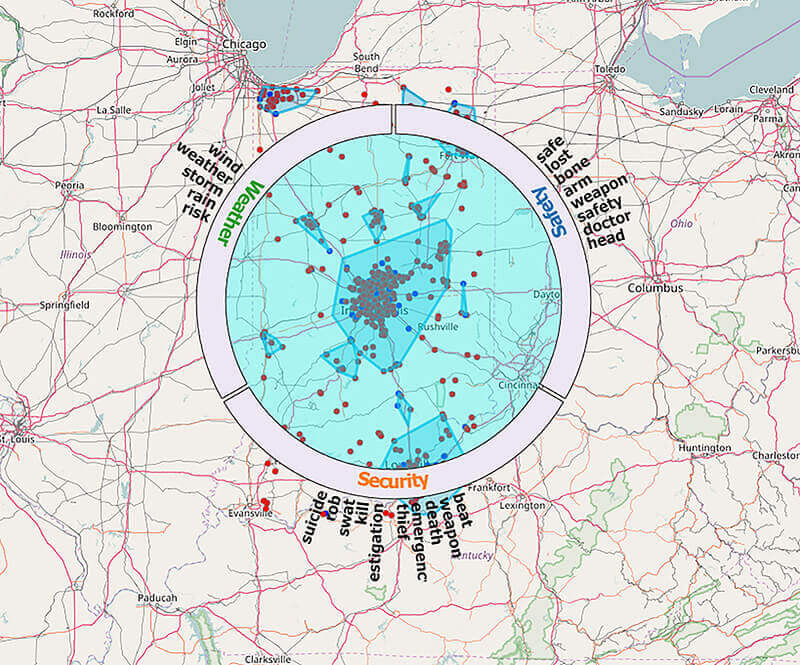 The goal is for SMART to be an affordable social media analytics tool that anyone can download.

“We want this to be available at low cost for every first responder,” Ebert said.

Note to Journalists: To download a full-text copy of the paper presented at the CHI 2018 Conference, visit https://dl.acm.org/citation.cfm?id=3173611 or contact Kayla Wiles, Purdue News Service, at wiles5@purdue.edu. A YouTube video is available at https://youtu.be/ZKPWdW0y1Og and other multimedia can be found in a Google Drive folder at https://goo.gl/N4gAn9. The materials were prepared by Erin Easterling, digital producer for the Purdue College of Engineering, 765-496-3388, easterling@purdue.edu.

TopoText is a context-preserving technique for visualizing text data for multi-scale spatial aggregates to gain insight into spatial phenomena. Conventional exploration requires users to navigate across multiple scales but only presents the information related to the current scale. This limitation potentially adds more steps of interaction and cognitive overload to the users. TopoText renders multi-scale aggregates into a single visual display combining novel text-based encoding and layout methods that draw labels along the boundary or filled within the aggregates. The text itself not only summarizes the semantics at each individual scale, but also indicates the spatial coverage of the aggregates and their underlying hierarchical relationships. We validate TopoText with both a user study as well as several application examples.