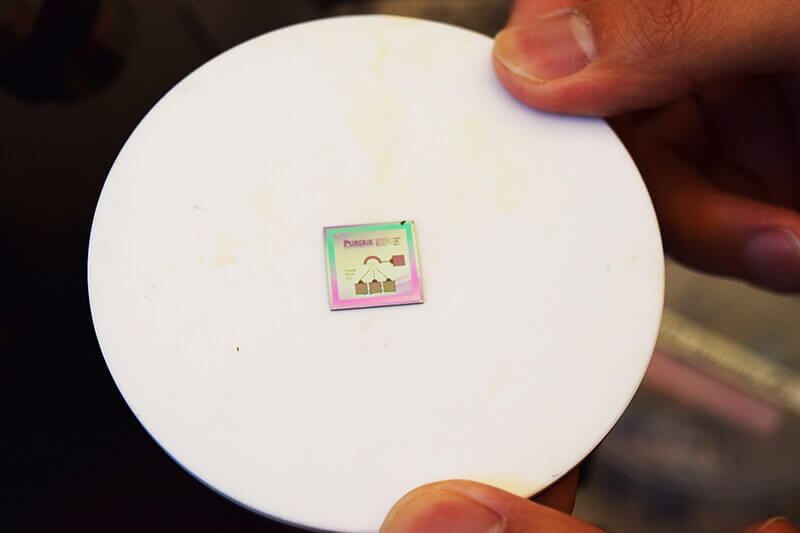 This small chip holds a 2-D electrode with a shape that can better stimulate small targets in the body over time. (Purdue University image/Kayla Wiles) Download image

The shape, called “fractal,” would be particularly useful for stimulating smaller areas, such as deep brain structures or the retina, since it maximizes perimeter within a smaller surface area – providing the higher resolution needed for restoring bodily functions and potentially enabling neurostimulation devices to last longer in the body without a recharge.

“There are challenges with shrinking the size of these electrodes,” said Hyowon “Hugh” Lee, assistant professor of biomedical engineering. “If you shrink them too small, then you can’t inject enough energy to be able to activate the underlying substrate.”

Industry currently produces circular or rectangular electrodes for neurostimulation devices. “There’s really no reason to maintain these shapes other than the fact that it makes it easier for the conventional manufacturing techniques to facilitate,” Lee said. “But microfabrication allows batch processing or even more scalable roll-to-roll fabrication, in which we have the design freedom to create any type of electrode design with high resolution to improve their functionality.”

Lee’s lab experimented with other shapes that could better inject charge with electrode size limitations. The fractal shape outperformed conventional shapes and the “serpentine,” or snake-like shape, even though it has a similar perimeter to surface area ratio as fractal. This could be because the repeating patterns of the fractal design better facilitate the continuous diffusion of charge transfer species, or reactants, to the platinum electrode surface. 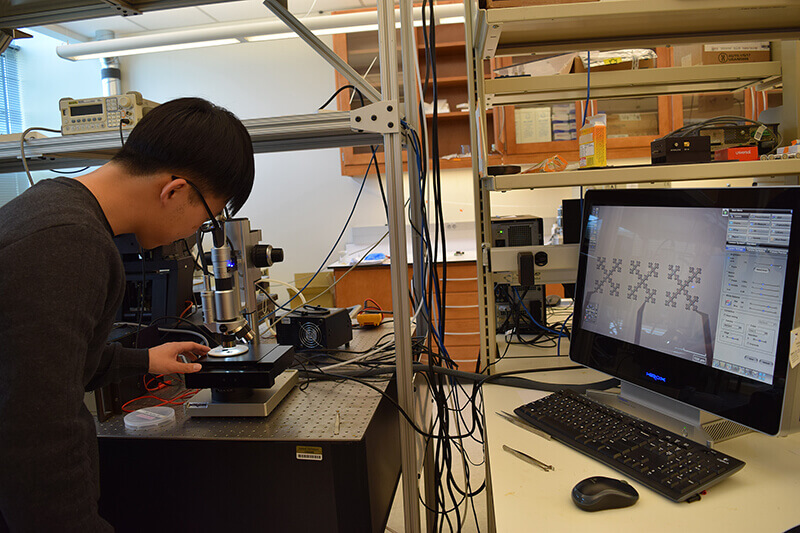 “When you have a lot more diffusion of species to the surface, it allows for faster Faradaic charge transfer from the electrode surface,” Lee said. The charge then reaches a threshold on neurons to trigger an action potential, or electrochemical signal, to stimulate a target.

Because fractal designs also feature lower impedance than conventional electrodes, they could allow more charge to be injected onto an electrode surface over time and extend the life span of neurostimulation devices. “If you have less load, meaning it takes less energy to get the same effect, then the fixed battery life of implantable stimulation devices is going to be improved,” Lee said.

The next step is to test the robustness and longevity of fractal designed-electrodes in comparison to conventional shapes. Lee’s lab is also looking into using the fractal design for improving sensitivity in devices such as biosensors. “The goal would be better control of stimulation over targeted areas and more pinpointed therapy,” Lee said.

Advancements in microfabrication has enabled manufacturing of microscopic neurostimulation electrodes with smaller footprint than ever possible. The smaller electrodes can potentially reduce tissue damage and allow better spatial resolution for neural stimulation. Although electrodes of any shape can easily be fabricated, substantial effort have been focused on identification and characterization of new materials and surface morphology for efficient charge injection, while maintaining simple circular or rectangular Euclidean electrode geometries. In this work we provide a systematic electrochemical evaluation of charge injection capacities of serpentine and fractal-shaped platinum microelectrodes and compare their performance with traditional circular microelectrodes. Our findings indicate that the increase in electrode perimeter leads to an increase in maximum charge injection capacity. Furthermore, we found that the electrode geometry can have even more significant impact on electrode performance than having a larger perimeter for a given surface area. The fractal shaped microelectrodes, despite having smaller perimeter than other designs, demonstrated superior charge injection capacity. Our results suggest that electrode design can significantly affect both Faradaic and non-Faradaic electrochemical processes, which may be optimized to enable a more energy efficient design for neurostimulation.