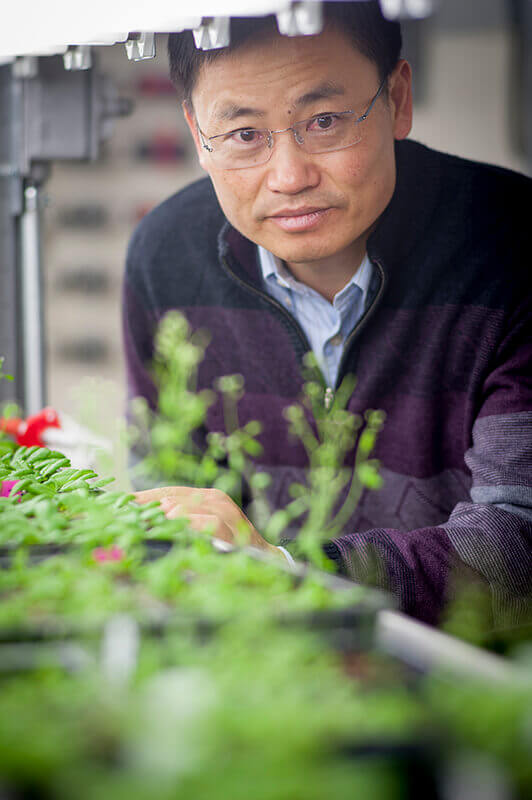 Jian-Kang Zhu’s research team used CRISPR/Cas9 gene-editing technology to silence a suite of genes in rice, leading to a variety that yields as much as 31 percent more grain. Download image

WEST LAFAYETTE, Ind. – A team of scientists from Purdue University and the Chinese Academy of Sciences has used CRISPR/Cas9 gene-editing technology to develop a variety of rice that produces 25-31 percent more grain and would have been virtually impossible to create through traditional breeding methods.

The team, led by Jian-Kang Zhu, a distinguished professor in the Department of Horticulture and Landscape Architecture at Purdue and director of the Shanghai Center for Plant Stress Biology at the Chinese Academy of Sciences, made mutations to 13 genes associated with the phytohormone abscisic acid, known to play roles in plant stress tolerance and suppression of growth. Of several varieties created, one produced a plant that had little change in stress tolerance but produced 25 percent more grain in a field test in Shanghai, China, and 31 percent more in a field test conducted on China’s Hainan Island.

Their findings were published early online today in the Proceedings of the National Academy of Sciences.

Zhu’s team, which includes Purdue’s Ray A. Bressan, a distinguished professor in the Department of Horticulture and Landscape Architecture, and researchers from the Chinese Academy of Sciences, silenced suites of pyrabactin resistance 1 (PYR1)/PYR1-like (PYL)/regulatory components of ABA receptor (ACAR) genes, or simply, PYL genes. These genes enhance tolerance of abiotic stresses, such as drought, soil salinity and other environmental factors, but also inhibit growth.

Since plants have evolved to create genetic redundancies, especially for traits required for survival, knocking out one gene in the PYL family might not have much effect on stress tolerance or growth since redundant genes can kick in to provide a similar function. Crafting the right knockout combination, however, led to a plant that uses just the right redundancies to hold onto its stress-tolerance characteristics but reduces the growth inhibition.

“There is lots of evidence that although each PYL gene may have an individual specialty in function, by and large they also share some common functions,” Zhu said. “When you remove one, others will function as a replacement.”

The CRISPR/Cas9 technology allows plant breeders to quickly and accurately snip portions of DNA out of a sequence, editing the DNA code. The method allowed Zhu’s team to modify multiple genes at one time, something that would have taken decades to do with traditional methods without a guarantee that the resulting plants would have the desired characteristics.

“You couldn’t do targeted mutations like that with traditional plant breeding. You’d do random mutations and try to screen out the ones you don’t want,” Bressan said. “It would have taken millions of plants. Basically, it’s not feasible. This is a real accomplishment that could not have been done without CRISPR.”

The improved rice plants created in these experiments come from a common research line. The next step is to use CRISPR/Cas9 to edit the same genes in elite varieties of rice to determine if those will also show similarly improved yield.

“If this holds true for the varieties that farmers currently use, this big increase in yield would be very important,” Zhu said. “It would really help produce a lot more grains to feed more people.”

The Shanghai Center for Plant Stress Biology at the Chinese Academy of Sciences supported this research.

b.     Department of Horticulture and Landscape Architecture, Purdue University, West Lafayette, IN

Abscisic acid (ABA) is a key phytohormone that controls plant growth and stress responses. It is sensed by the pyrabactin resistance 1 (PYR1)/PYR1-like (PYL)/regulatory components of the ABA receptor (RCAR) family of proteins. Here, we utilized CRISPR/Cas9 technology to edit group I (PYL1–PYL6 and PYL12) and group II (PYL7–PYL11 and PYL13) PYL genes in rice. Characterization of the combinatorial mutants suggested that genes in group I have more important roles in stomatal movement, seed dormancy, and growth regulation than those in group II. Among all of the single pyl mutants, only pyl1 and pyl12 exhibited significant defects in seed dormancy. Interestingly, high-order group I mutants, but not any group II mutants, displayed enhanced growth. Among group I mutants, pyl1/4/6 exhibited the best growth and improved grain productivity in natural paddy field conditions, while maintaining nearly normal seed dormancy. Our results suggest that a subfamily of rice PYLs has evolved to have particularly important roles in regulating plant growth and reveal a genetic strategy to improve rice productivity.