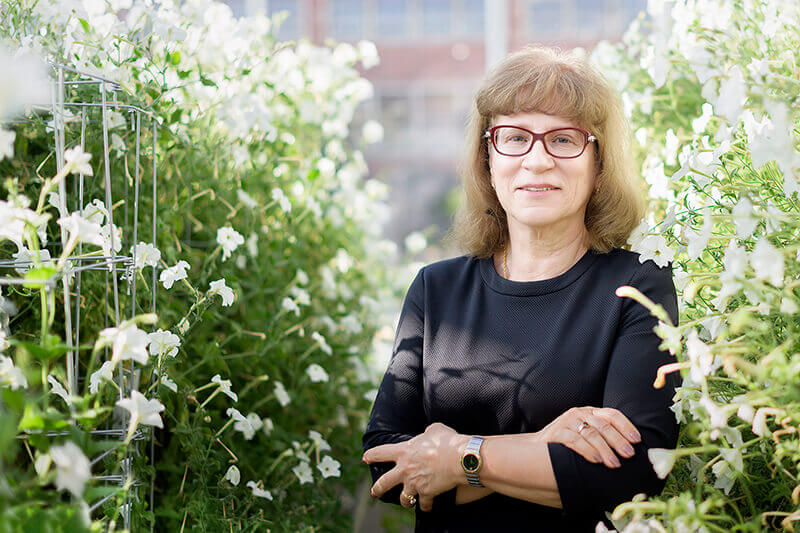 WEST LAFAYETTE, Ind. — Natalia Dudareva, Distinguished Professor of Biochemistry and a professor of horticulture and landscape architecture in the College of Agriculture, has been chosen as the 2018 Herbert Newby McCoy Award recipient. One of Purdue University’s top three research honors, the McCoy Award is given for outstanding work in the natural sciences.

Dudareva is being recognized for her scientific leadership in plant biochemistry and for repeatedly disrupting conventional wisdom with paradigm-changing discoveries.

“Dr. Dudareva is one of the world’s leading authorities on the biochemistry of floral scent compounds, the mixture of substances produced by flowers to attract pollinators,” said Suresh Garimella, Purdue’s executive vice president for research and partnerships and the Goodson Distinguished Professor of Mechanical Engineering. “In recent years, she has helped define a new area of study in plant biology — the transport and release of plant volatile organic compounds. Some of her recent work in this field is truly groundbreaking.”

Dudareva will deliver the McCoy Distinguished Lecture on Oct. 29 in Stewart Center’s Fowler Hall. The 3:30 p.m. lecture is free and open to the public.

Dudareva received a Ph.D. in biochemistry and molecular biology from the Institute of Biochemistry, Kiev, Ukraine, and then a second Ph.D. in plant molecular biology from the University Louis Pasteur, Strasbourg, France. She joined Purdue University in 1997. Over the last 20 years, she has explored the molecular mechanisms of plant metabolism and how plants produce volatile compounds, scent and taste components that are essential for successful pollination, fruit development and plant defense.

Using biochemical, genetic and molecular approaches, Dudareva has provided insights into fundamental plant biology. She also has pioneered research into the biosynthetic pathways that underpin plants' strategies for attracting pollinators, communicating with other plants and defending themselves from pathogens, parasites and herbivores.

Dudareva’s research has led to the discovery of a microbial-like pathway in plants that produces phenylalanine, an amino acid that is a vital component of proteins. She also showed that active biological mechanisms are involved in transporting plant volatiles from plant cells to the atmosphere, a finding that could overturn the prevailing model of volatile emission as a process that occurs solely by diffusion.

A fellow of the American Association for the Advancement of Science (AAAS), Dudareva received an Excellent Scholar Award from the XIX International Botanical Congress in China in 2017 and the Alexander von Humboldt Research Award in Germany in 2016. Her work has been cited nearly 12,000 times according to Google Scholar, and she holds three U.S. patents.

The Herbert Newby McCoy Award was established in 1964 by Ethel Terry McCoy in honor of her husband, a distinguished Purdue University alumnus. The award comes with a cash prize and small grant for university scholarly activities. Winners of the McCoy Award are nominated by colleagues, recommended by a faculty committee and named by the university president.