Wasting food may be safe, reasonable decision for some, study says 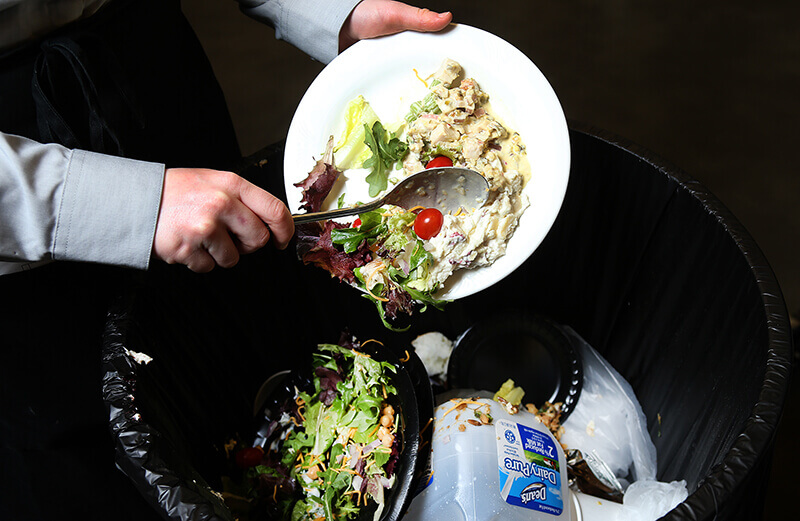 About 21 percent of the American food supply goes to waste, with much at the consumer level in restaurants and homes. But the choice to throw out leftovers may often be a rational one based on time and food safety, according to research from Purdue University economist Jayson Lusk. (Purdue Agricultural Communication photo/Tom Campbell)

WEST LAFAYETTE, Ind. - About 21 percent of the American food supply is wasted by consumers at home and in restaurants, but little is known about why. A Purdue University economist has shown that those tossing food in the trash can are likely making rational decisions based on their time and safety.

As the global population is expected to exceed 9 billion people by 2050, governments, academics and many nonprofit organizations are working to reduce food waste. The U.S. Department of Agriculture estimates that as much as 40 percent of food in the U.S. is wasted, with half of that coming at the consumer level.

Much of the emphasis thus far has been on farms, processing facilities, restaurants and grocery stores. But reducing waste at the consumer level has been difficult because it isn’t clear why consumers choose not to package leftovers or let them sit too long in the refrigerator before discarding them.

Jayson Lusk, distinguished professor and head of Purdue’s Department of Agricultural Economics, believes that those consumers may be making rational, economical decisions. His study, published in the journal Applied Economic Perspectives and Policy, shows that consumers are weighing decisions about waste against their time and the likelihood that the food will make them sick.

“A lot of the discussion around food waste had been couched in moral terms, that waste was a sin,” Lusk said. “Food waste can be a result of a mistake or inefficiency, but in a lot of cases it’s done for a very logical reason. Many economic factors are at play in deciding whether to throw food out.”

Lusk and Brenna Ellison, assistant professor in the Department of Agricultural and Consumer Economics at the University of Illinois, posed two different scenarios with multiple variables to survey respondents to measure consumer behavior around food waste.

In the first scenario, Lusk and Ellison asked what respondents would do with leftovers from a meal. Variables included where the meal was prepared (at home or in a restaurant), the cost of the meal ($8 or $25), how much was left (enough for a full lunch or just a half portion), and whether the diners had the next day’s lunch and dinner already planned.

In the second scenario, survey participants were asked about their likely decisions after finding a carton of milk in the refrigerator that was one day past expiration. Variables included the amount of milk in the carton (one-quarter full or three-quarters full), how it smelled (fine or slightly sour), whether there was another unopened carton of milk in the fridge, and the price of a new gallon of milk ($2.50 or $5).

This time, one variable stood out.

“Probably the biggest effect we saw was that if the milk smelled a little off, you were much more likely to throw out the milk,” Lusk said.

Sour-smelling milk would go down the drain between 50 percent and 58 percent of the time, depending on the other variables. Younger participants (18-44) were more likely to discard expired milk when it smelled fine compared with those 65 and older.

Lusk said the results show that people are making rational decisions about their safety, time, money and potential enjoyment of the leftovers. For example, a consumer is unlikely to want to box up a cheap meal at a restaurant, carry it around until he or she gets home and try to enjoy portions of a meal that don’t reheat well, such as french fries.

“In a way, it would kind of be irrational to expect someone to get the same level of enjoyment from that food that we cajole them into keeping,” Lusk said. “Some people may not want to spend time and energy on preventing waste in that situation that could be better spend on other activities.”

The milk scenario also suggests that consumers are confused by “sell by” and “best by” dates on packages, and that efforts to find more clear ways to tell consumers when a product is no longer safe could be helpful.

“The milk results provide further evidence that more consumer education is needed on date labeling - particularly among those consumers who are likely to throw out milk even when it smells fine,” the authors write. “Sensory properties are touted as an important signal for discerning product quality and safety, yet some consumers strictly rely on (potentially misleading) date labels.”

Lusk plans to continue research on consumer food waste decisions. He is interested in working with garbage haulers to correlate socioeconomic factors with the amount of food being discarded.

Although food waste is increasingly recognized as an environmental and food security problem, there remains uncertainty over its primary contributors. Some food waste analyses seem to treat household food waste as a “mistake” or careless decision; however, consumer decisions to waste also likely reflect trade-offs and economic incentives. These issues were explored in large surveys of U.S. food consumers using both within- and between-subject designs, where we study consumers’ decisions to discard food in different scenarios that vary safety, price, and opportunity costs. We find that food waste is a function of consumers’ demographic characteristics, and that decisions to discard food vary with contextual factors.