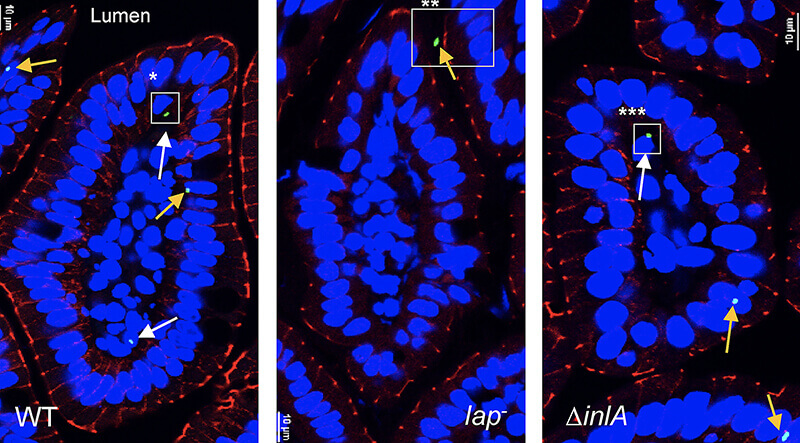 WEST LAFAYETTE, Ind. - Purdue University scientists have found another pathway that Listeria uses to enter the bloodstream, suggesting that forms of the foodborne bacteria considered benign may be more dangerous than once thought.

About 600 million people around the world contract listeriosis each year, with 420,000 dying, according to the World Health Organization. In the U.S., 1,600 people are infected each year, causing 260 deaths, according to the U.S. Centers for Disease Control and Prevention. Pregnant women, newborn children, adults 65 and older and people with weakened immune systems are most at risk. The pathogen is found most often in deli meat, hot dogs, dairy products and produce.

To infect someone, the Listeria monocytogenes bacteria must cross the epithelial barrier, a wall of cells in the gut that generally protects the bloodstream from harmful pathogens. It has long been believed that a protein called Internalin A, found in many forms of Listeria, is required for breaking through that barrier.

Arun Bhunia, a Purdue food microbiology professor in the Department of Food Science, and his team fed Listeria to mice that have a non-functional receptor for the Internalin A protein. If Internalin A is required for Listeria monocytogenes bacteria to reach the bloodstream, these mice should not have been infected. But they were.

“As soon as we feed the mice this bacterium, it goes through the intestine and crosses this epithelial barrier and into the blood circulation, liver and spleen,” Bhunia said. “This suggests there is another way in which Listeria monocytogenes gets through these cells and into the bloodstream.”

Bhunia’s findings, reported in the journal Cell Host & Microbe, show Listeria adhesion protein (LAP) interacts with heat shock protein (HSP) in mice, then the epithelial cells move apart to give the bacterium access to the bloodstream. But that is just one path the bacteria might use to infect a host.

“When LAP interacts with HSP, those cells move apart, not only giving the bacterium access to the bloodstream, but also exposing the Internalin A receptors and allowing transport of Listeria monocytogenes into the bloodstream, which likely happens in humans,” Bhunia said. “Now that we know the mechanism, we can look at how to block this pathway to prevent the infection.”

The findings are also important because Listeria strains that have the defective or nonfunctional Internalin A protein haven’t been considered dangerous. But if the bacteria have another way through the gut and into the bloodstream regardless of Internalin A, that’s no longer true.

“We cannot just think that because most of these bacteria that are found in food are Internalin A mutants, we can tolerate it. We can still get infected,” said Rishi Drolia, a graduate research assistant in Bhunia’s lab.

Next, Bhunia’s team is working on development of a vaccine that blocks LAP, which could be a method for keeping Listeria from reaching the bloodstream. The Purdue AgSEED program, the U.S. Department of Agriculture and the Purdue Research Foundation supported this research.

Intestinal epithelial cells are the first line of defense against enteric pathogens yet bacterial pathogens, such as Listeria monocytogenes, can breach this barrier. We show that Listeria adhesion protein (LAP) induces intestinal epithelial barrier dysfunction to promote bacterial translocation. These disruptions are attributed to production of pro-inflammatory cytokines TNF-α and IL-6, which is observed in mice challenged with WT and isogenic strains lacking the surface invasion protein, Internalin A (ΔinlA), but not a lap— mutant. Additionally, upon engagement of its surface receptor Hsp60, LAP activates canonical NF-κB signaling, facilitating myosin light-chain kinase (MLCK)-mediated opening of the epithelial barrier via cellular redistribution of the epithelial junctional proteins claudin-1, occludin, and E-cadherin. Pharmacological inhibition of MLCK or NF-κB in cells or genetic ablation of MLCK in mice prevents mislocalization of junctional proteins and L. monocytogenes translocation. Thus, L. monocytogenes uses LAP to exploit epithelial defenses and cross the intestinal epithelial barrier.