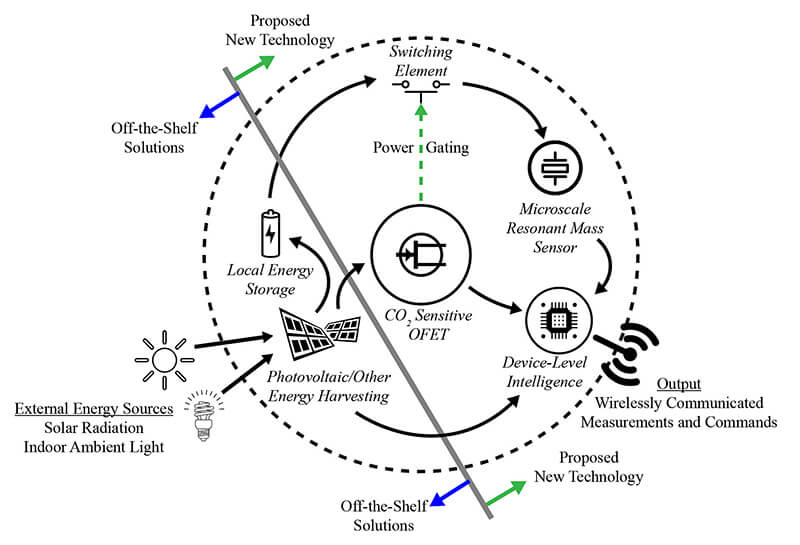 WEST LAFAYETTE, Ind. – Purdue University will lead a U.S. Department of Energy project to develop sensors aimed at reducing the cost and environmental impact of operating a building’s heating, air-conditioning and ventilation system.

The new sensor is designed to continuously determine how many people are occupying a room or building by measuring changes in carbon dioxide concentration. Such an advance would allow energy savings by largely restricting air conditioning and heating to occupied areas.

“The big picture is that being able to turn off the heating and air conditioning in a sensible way would allow you to save a substantial part of U.S. energy consumption,” said Jeffrey Rhoads, a professor in Purdue’s School of Mechanical Engineering, who leads the project. “To do that you need to be able to tell when a room is occupied and how many people there are.”

The project, which begins in May, is funded with a three-year, $1.5 million grant from the DOE’s Advanced Research Projects Agency-Energy through its new Saving Energy Nationwide in Structures with Occupancy Recognition, or SENSOR, program.

About 13 percent of all energy produced in the United States today is used to heat, cool and ventilate buildings, with much of it wasted — used when buildings are unoccupied or not fully occupied.

One way to determine a building’s changing occupancy is to continually measure the concentration of carbon dioxide, which is exhaled by people, said Rhoads, the project’s principal investigator. He is working with George Chiu, a professor of mechanical engineering; Bryan Boudouris, the Robert and Sally Weist Associate Professor of Chemical Engineering; and James Braun, the Herrick Professor of Engineering and director of the Center for High Performance Buildings in Purdue’s Ray W. Herrick Laboratories.

The new sensor combines two technologies. First, a sensor developed in research led by Boudouris will detect the presence of carbon dioxide. Then, another sensor developed by Rhoads and Chiu will perform precise measurements to determine how many people are in the room.

“Our approach is to use these two sensors in concert so that you will only do a fine measurement of the concentration of CO2 (carbon dioxide) if someone is present in the room, saving energy in the sensing process,” Rhoads said. “The first sensor detects CO2 and is used as a switch to turn on the second one, and by doing that you save all of the power of running the second one continuously. And this strategy allows us to satisfy some key metrics on power consumption and longevity. It will have to run on very little power and last several years. We don’t want a system that you have to maintain on a yearly or monthly basis.”

The sensor will be slightly larger than a postage stamp, cost less than 6 cents per square footage of building space to operate and last longer than three years. The technology is an example of a microelectromechanical system, or a MEMS, which are devices that contain tiny micro-scale mechanical components. Vibrating plates behave differently when in the presence of CO2. They will be coated with a film that absorbs CO2, causing a change in vibration frequency. The sensor will be reset by heating the sensor components, driving the CO2 gas out.

“You could think of it as a smoke detector, except that we are focused on carbon dioxide and not simply detecting; we are also measuring,” Rhoads said.

The research will be performed primarily in the Herrick Laboratories. Two postdoctoral research associates and a graduate student also will be involved in the project.