Babies stir up clouds of bio-gunk when they crawl

WEST LAFAYETTE, Ind. — When babies crawl, their movement across floors, especially carpeted surfaces, kicks up high levels of dirt, skin cells, bacteria, pollen, and fungal spores, a new study has found. The infants inhale a dose of bio bits in their lungs that is four times (per kilogram of body mass) what an adult would breathe walking across the same floor.

As alarming as that sounds, lead researcher Brandon Boor of Purdue University is quick to add that this isn’t necessarily a bad thing.

"We are interested in the biological material an infant inhales, especially during their first year of life when they are crawling. Many studies have shown that inhalation exposure to microbes and allergen-carrying particles in that portion of life plays a significant role in both the development of, and protection from, asthma and allergic diseases," says Boor, an assistant professor of civil engineering and environmental and ecological engineering. "There are studies that have shown that being exposed to a high diversity and concentration of biological materials may reduce the prevalence of asthma and allergies later in life."

Scientists have previously done studies to determine how much dirt and biological material is kicked up and resuspended into the air when an adult walks indoors, but this is the first study to look at what happens with infants and their unique forms of locomotion.

A robot baby was used to determine how much biological material crawling infants stir up from carpets by a research team led by Brandon E. Boor, an assistant professor at Purdue University. They found that crawling children breathe in four times what an adult would breathe in walking across the same floor. (Purdue University image) Download image

Human babies are the only mammals that can't get up and walk soon after being born. Elephants, giraffes, horses, all can take a few wobbly steps soon after they enter the world, but it's months before a human can claim the same accomplishment.

(Anthropologist David Tracer of the University of Colorado has suggested that based on studies of indigenous cultures, crawling is not necessary for human development. In fact, he has suggested, it only became common once people began living in structures with wooden floors.)

As babies roll, slide and crawl on the floor, their movements stir up more particulates into the air, and their mouths and nostrils are much closer to the floor where the concentrations are greater. This is countered somewhat by the fact that babies tend to move in much shorter bursts of activity than do older children or adults.

To study just how much of the floor debris babies breathe, the research team built a robotic crawling baby (which is much less adorable than the real thing) and tested it crawling on actual carpet samples they had removed from homes. Then the researchers measured and analyzed the particulates in the breathing zone.

“We used state-of-the-art aerosol instrumentation to track the biological particles floating in the air around the infant in real-time, second by second.  The instrument uses lasers to cause biological material to fluoresce.  Most bacterial cells, fungal spores, and pollen particles are fluorescent, so they can be reliably distinguished from non-biological material in the air," Boor says. "We also worked with a microbiology group at Finland's National Institute for Health and Welfare, which conducted DNA-based analysis of the microbes we collected onto filters." 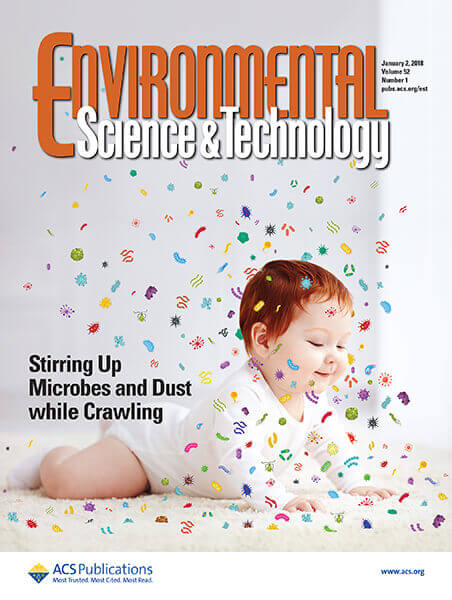 An international study on how much and the types of biological material babies stir up by crawling on carpet was led by Purdue University's Brandon Boor. (Image courtesy of the American Chemical Society) Download image

The researchers found that a concentrated cloud of resuspended particles forms around the Pig-Pen wannabes, and that the concentrations around them can be as much as 20 times greater than the levels of material higher in the room.

"For an adult, a significant portion of the biological particles are removed in the upper respiratory system, in the nostrils and throat. But for very young children, they more often breathe through their mouths, and a significant fraction is deposited in the lower airways—the tracheobronchial and pulmonary regions. The particles make it to the deepest regions of their lungs."

Counterintuitively, perhaps, this may be just what nature intended.

In the late 1980s, British epidemiologist David Strachan was the first to propose the "hygiene hypothesis," which says that too clean of an environment may suppress the development of the immune system. Allergists also sometimes refer to this as "the farming effect."

"Exposure to certain bacterial and fungal species can result in the development of asthma, but numerous studies have shown that when an infant is exposed to a very high diversity of microbes, at a high concentration, they can have a lower rate of asthma later in life. Such exposures act to stimulate and challenge your immune system," Boor says. 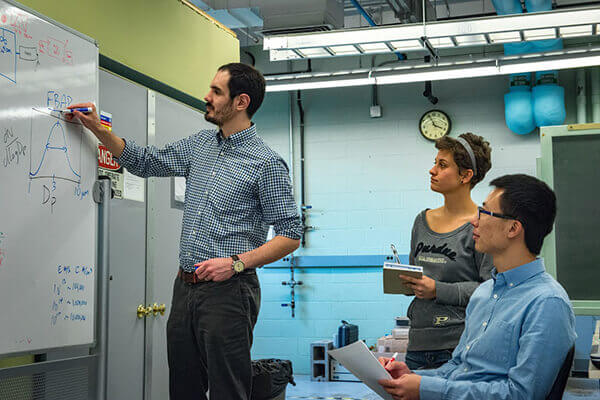 Brandon Boor, a Purdue University assistant professor of civil engineering and environmental and ecological engineering, together with graduate students Danielle Wagner and Tianren Wu, are studying air quality in indoor environments. Their most recent study focused on what babies breathe while crawling on carpets. (Purdue University photo by Marshall Farthing) Download image

In Western societies, infants spend nearly all of their time indoors, where indoor dust resuspension may contribute significantly to their respiratory encounters with biological material.

“While our research established new methods for infant microbial exposure assessment, much remains to be discovered,” Boor says. “I hope to continue to work with microbiologists and immunologists to better understand the role of indoor air microbes and allergens on early-childhood health.”

Note to Journalists: A photo of Brandon Boor with his graduate students is available, as are a video and three animated .gifs of the robot baby. Contact Steve Tally at steve@purdue.edu. A .pdf copy of the research paper is also available.

Human-induced resuspension of floor dust is a dynamic process that can serve as a major indoor source of biological particulate matter (bioPM). Inhalation exposure to the microbial and allergenic content of indoor dust is associated with adverse and protective health effects. This study evaluates infant and adult inhalation exposures and respiratory tract deposited dose rates of resuspended bioPM from carpets. Chamber experiments were conducted with a robotic crawling infant and an adult performing a walking sequence. Breathing zone (BZ) size distributions of resuspended fluorescent biological aerosol particles (FBAPs), a bioPM proxy, were monitored in real-time. FBAP exposures were highly transient during periods of locomotion. Both crawling and walking delivered a significant number of resuspended FBAPs to the BZ, with concentrations ranging from 0.5 to 2 cm−3 (mass range: ∼50 to 600 μg/m3). Infants and adults are primarily exposed to a unimodal FBAP size distribution between 2 and 6 μm, with infants receiving greater exposures to super-10 μm FBAPs. In just 1 min of crawling or walking, 103−104 resuspended FBAPs can deposit in the respiratory tract, with an infant receiving much of their respiratory tract deposited dose in their lower airways. Per kg body mass, an infant will receive a nearly four times greater respiratory tract deposited dose of resuspended FBAPs compared to an adult.