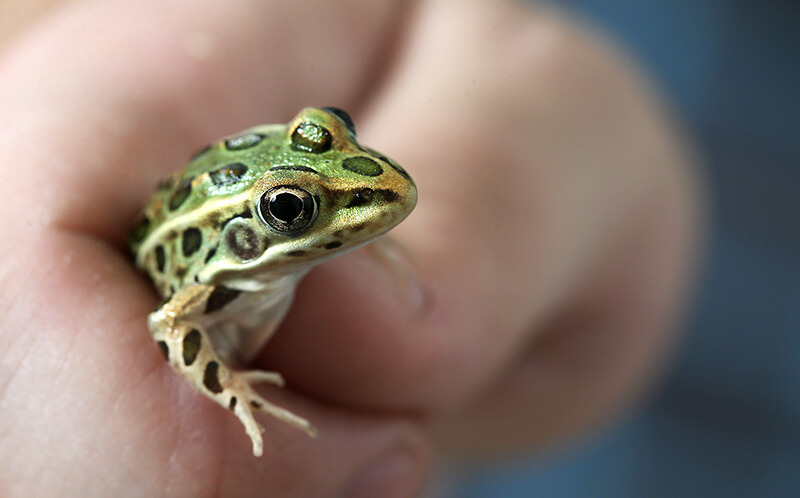 WEST LAFAYETTE, Ind. – A series of synthetic chemicals widely used in household products, food packaging and clothing have a significant effect on the development of frogs, even at low doses, according to a Purdue University study.

Per/polyfluoroalkyl substances (PFASs) are man-made chemicals used to make products stain resistant, waterproof and nonstick, and are present in foams used to fight fires. A U.S. Centers for Disease Control and Prevention (CDC) study from 2007 showed that some PFASs were present in 98 percent of blood samples collected from American adults and children for the National Health and Nutrition Examination Survey. According to the CDC, scientific studies on the impact of PFASs on human health are inconclusive.

Maria Sepúlveda, professor of ecology and natural systems and associate head of research in Purdue’s Department of Forestry and Natural Resources, is leading studies to determine how these chemicals affect amphibians. Her first study on the northern leopard frog shows that PFASs at levels as low as 10 micrograms per liter of water could stunt the animal’s development by two stages over a 30-day period. Frogs introduced to low levels of the chemicals were around 10 percent smaller than a control.

In this study, northern leopard frog tadpoles were exposed to 10, 100 and 1,000 micrograms of PFASs per liter of water for 30 days. Contaminated sites reach into the hundreds of micrograms per liter, including parts of Lake Ontario (121), parts of the Mississippi River (226) and a well at Wurtsmith Air Force Base in Michigan (120), which all contain a PFAS called perfluorooctanesulfonate (PFOS).

At each level, including the lowest, tadpole development was stunted. That could be a serious issue for an animal’s safety.

Once the tadpoles were removed from contaminated water, the PFASs had a half-life — the time it takes for a substance to decrease by half — of 3.3 days, at the longest. Within days, the chemicals were out of the animal’s bloodstream. But Sepúlveda points out that in humans, the half-life of these chemicals is years.

Sepúlveda and colleagues are studying the effects of PFASs on amphibians through a U.S. Department of Defense grant. The government uses foams with the chemicals to put out fires after testing weapons. The contaminated sites are home to many animal species, and the contaminants can reach human drinking water.

“They would use these foams to combat fires. Over decades of use, people started noticing these chemicals were still there. Some have half-lives of decades. They are very persistent,” Sepúlveda said.

The work will help with an understanding of how PFASs impact animals and how much would need to be cleaned up to neutralize those effects for certain species of animals. In addition to the northern leopard frog, the research team that includes faculty and students from Purdue’s Department of Forestry and Natural Resources and Department of Agronomy, will look at both short- and long-term effects on Eastern tiger salamanders and American toads.

ABSTRACT: Per/polyfluoroalkyl substances (PFASs) are persistent organic contaminants that are ubiquitous in surface waters. To date, their effects on aquatic systems, especially amphibians, are poorly understood. We examined the uptake and depuration of perfluorooctanesulfonate (PFOS), perfluor- ohexanesulfonate (PFHxS), perfluorooctanoic acid (PFOA), and 6:2 fluorotelomer sulfonate (6:2 FTS) in northern leopard frog (Rana pipiens) tadpoles. Whole-body concentrations were examined every 10 d during constant aqueous exposure to targeted concentrations of 10, 100, and 1000 μg/L for 40 d and for 30 d during depuration. Effects of PFAS exposure on length and development were also examined. Rapid uptake led to steady state concentrations by 10 d for most exposures. PFOS accumulated to the highest levels with whole-body bioconcentration factor (BCF) values at 40 d ranging from 19.6 to 119.3. The remaining PFASs were not found to bioconcentrate (BCF < 1.0 at 40 d). Furthermore, some BCF values decreased during the exposure phase, suggesting dilution due to growth and/or changes in toxicokinetics over ontogeny. During depuration, half-lives ranged from 1.2 to 3.3 d for all compounds. All PFASs tended to induce developmental delays, though statistical significance was only seen for PFOS and PFHxS. These sublethal effects observed at environmentally relevant concentrations are concerning and merit further study.