We should use central pressure deficit, not wind speed, to predict hurricane damage 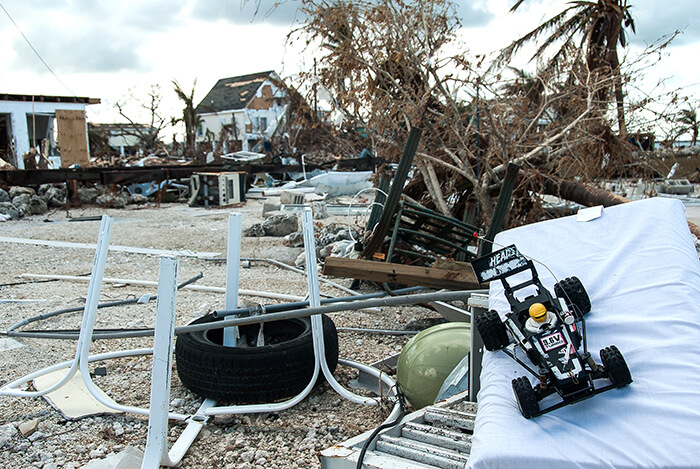 Damage to homes in Key West from Hurricane Irma. (Photo by Dan Chavas)

WEST LAFAYETTE, Ind. — The system for categorizing hurricanes accounts only for peak wind speeds, but research published in Nature Communications explains why central pressure deficit is a better indicator of economic damage from storms in the United States.

“Sandy is the classic example. It was a very big storm, but in terms of maximum wind speed it was arguably not a hurricane,” said Dan Chavas, an assistant professor of atmospheric science at Purdue University who led the study. “If you looked at the central pressure deficit, you would have expected it to cause a lot of damage. But if you used maximum wind speed, as people usually do, you wouldn’t expect it to do the damage that it did.”

Central pressure deficit refers to the difference in pressure between the center of the storm and outside it. Pressure and wind speed have been used interchangeably to estimate potential damage from hurricanes for years, but the relationship between them has been a long-standing riddle in tropical meteorology.

Chavas and his colleagues have defined a theory that solves that riddle. Previous work has observed that central pressure deficit depends on maximum wind speed, storm size, and latitude, but Chavas’ team has determined why that is.

Scientists could use this theory to calculate peak wind speed if they had numbers for the other metrics in the equation, which could come in handy because wind speeds need to be measured at several points of a storm, making it difficult to get an accurate reading.

The research team tested their theory on two simulations of Earth.

The first used the actual distribution of sea surface temperatures and solar radiation since 1979 to produce conditions similar to real historical climate.

The second simulation produced a very simplified version of the Earth. It had no land, and ocean temperature and solar radiation were the same everywhere. This made the entire planet sort of like the tropics, meaning hurricanes could pop up anywhere – but they still tended to form at low latitudes and move westward and toward the poles, like they do on Earth.

“The idea is that if we test our theory in this very simple world, and then take it to the real world where everything is much more complicated and we get the same results, all that complexity is irrelevant,” Chavas said. “People tend to work in different worlds – either the simplified world or the real world, and they don’t talk to each other that much. We’re bridging that gap.”

The limitations of the official scale for hurricane categorization, the Saffir-Simpson Hurricane Wind Scale, have come under scrutiny recently. The wind speed meteorologists settle on is often only an estimate, and it’s also highly localized because it depends on a speed sustained for a short time in one location. However, it’s popular with the public and media because of its simplicity.

Some have advocated for new systems of categorization, including the Cyclone Damage Potential Index and the Integrated Kinetic Energy Index. Both of these systems take into account factors other than wind speed – the idea being that more variables make a scale more valuable. Boiling down a storm’s complexity to a single number may be unrealistic, but there are surely ways to improve the current system. The Purdue team’s work shows that central pressure deficit itself may achieve this goal, or at least do a better job than maximum wind speed alone.

The relationship between the two common measures of tropical cyclone intensity, the central pressure deficit and the peak near-surface wind speed, is a long-standing problem in tropical meteorology that has been approximated empirically yet lacks physical understanding. Here we provide theoretical grounding for this relationship. We first demonstrate that the central pressure deficit is highly predictable from the low-level wind field via gradient wind balance. We then show that this relationship reduces to a dependence on two velocity scales: the max- imum azimuthal-mean azimuthal wind speed and half the product of the Coriolis parame- ter and outer storm size. This simple theory is found to hold across a hierarchy of models spanning reduced-complexity and Earth-like global simulations and observations. Thus, the central pressure deficit is an intensity measure that combines maximum wind speed, storm size, and background rotation rate. This work has significant implications for both funda- mental understanding and risk analysis, including why the central pressure better explains historical economic damages than does maximum wind speed.