WEST LAFAYETTE, Ind. – Researchers have learned the mechanisms behind a common type of failure in lithium-ion batteries caused by the formation and growth of “dendrites,” findings that could aid in the design of faster-charging and longer-lasting batteries.

Dendrites are lithium formations that grow inside the batteries. Because they grow faster while exposed to large electrical currents needed for fast recharging, the dendrites limit recharging speed.

“We’ve all had the experience of spending two or three hours at the airport waiting for our cellphones to charge,” said Edwin García, a professor of materials engineering at Purdue University. “Better control of dendrite growth would lead to faster charging.”

Batteries have two electrodes, called an anode and a cathode, separated by an insulating polymer. Dendrites that grow in needlelike shapes may breach the separating barrier, destroying the battery.

The new research findings were detailed in a paper published online Nov. 1 in the journal Nano Energy and will appear in a future print issue. The paper was authored by graduate student Aniruddha Jana and García.

Their previous research focused on the basic mechanisms and the electrochemistry of dendrites. 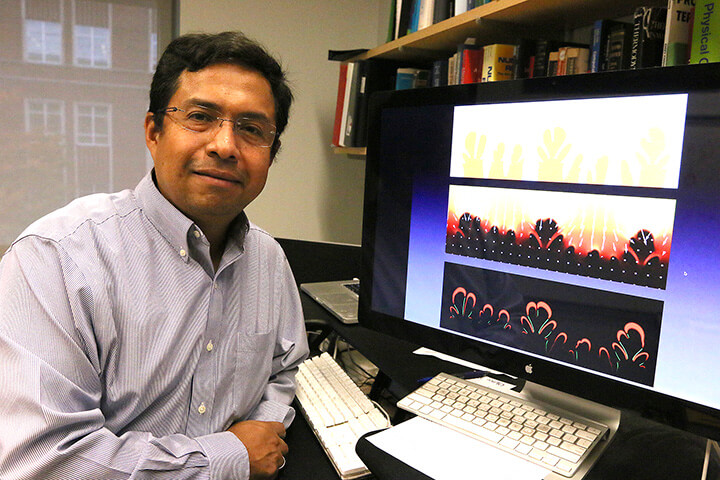 “Since then what we have found is that actually this issue is much more complicated than we thought it would be, that there are internal regimes of behavior,” García said. (A YouTube video is available at https://youtu.be/_fu1zvqoDm0)

It was already known that the dendrites have two modes of growth. In one mode, lithium accumulates in layers on the tip, or cap, of the formations, producing a gradual expansion. In the second mode, the dendrites grow from the base, which is far faster and more dangerous than tip expansion.

However, until now the mechanism for the second form of growth was not known. It was found that adding lithium to the cap creates stress that results in an exponential growth from the base.

“It turns out that lithium is like a tube of toothpaste,” he said. “It’s really soft, and when you add that lithium, it stresses the dendrite, and it’s like squeezing the tube. It just squirts out.”

The findings also reveal a third mode of dendrite growth called the mixed-growth regime, which combines both modes.

The new findings will be incorporated into more sophisticated models to study and predict dendrite growth and for improved battery designs.

“Understanding the mechanisms of dendrite growth represents the first step in controlling them,” he said. “This allows us to find more realistic strategies to mitigate dendrite growth, which makes batteries safer, and to find better charging strategies.”

This animation shows the deposition rate of lithium deposition. Tip-controlled growth is in highlighted in red, and electrodissolution is highlighted in green. When the dentrites reach the cathode side of the battery, the battery fails. (Animation provided) Download image

One approach to potentially solve the problem is to induce lithium to grow uniformly and relatively flat instead of heterogeneously and pointed. The heterogeneous growth means the dendrites sprout unevenly at various locations on the anode's surface. If they could be induced to grow uniformly and in a more controlled manner, the battery could be designed to accommodate this growth, preventing formations from reaching the cathode, García said.

Whereas the anodes in today’s batteries are made of carbon, the anodes in these new types of batteries would be made of pure lithium, which could increase capacity tenfold but make them more vulnerable to dendrites.

The researchers created a “unified theoretical framework of dendrite growth kinetics” that assesses the contribution of different driving forces of dendrite formation and growth and identified five “regimes of lithium growth.”

“These findings suggest a road map to design dendrite-free, lithium-based anodes as a stepping stone to identify alternate chemistries that are dendrite-free,” García said.

Jana performed the mathematical calculations for the research and created a catalog of the various types of microstructures associated with the dendrite growth as a battery is being charged.

The work is ongoing and has been supported in part by the U.S. Department of Energy through the Hoosier Heavy Hybrid Center of Excellence.

Note to Journalists: The research paper is available http://www.sciencedirect.com/science/article/pii/S2211285517305244 or from Emil Venere, Purdue University News Service, 765-494-4709. venere@purdue.edu. A YouTube video is available at https://youtu.be/_fu1zvqoDm0  and other video is accessible on Google Drive at https://goo.gl/oqJUfp.  The video was produced by Erin Easterling, Purdue College of Engineering digital producer, 765-496-3388, Easterling@purdue.edu

A unified theoretical framework of dendrite growth kinetics has been developed to account for the coupled effects of electrodeposition, surface tension, and elastic and plastic deformation. The contribution of each driving force is assessed to identify five regimes of lithium growth: thermodynamic suppression regime, incubation regime, tip-controlled growth regime, base-controlled growth regime, and mixed growth regime, in agreement with the experimental scientific literature. Tip-controlled growth shows a linear time-dependence, while base-controlled growth shows an exponential time-dependence. A minimum in the growth rate, as a result of the reaction energy barrier increase imposed on the interface by the local elastic energy, is identified in the mixed growth regime. Further, two characteristic deposition times are identified: the characteristic deposition time, t◦, which defines the critical time scale necessary to overcome the electrochemical energy barrier for nucleation, and the characteristic plasticity time, tσ, which corresponds to the time scale necessary for plastic flow to occur, given a local shear stress. Examples of experimentally reported transitions between tip-controlled growth and base-controlled growth are readily captured through the proposed framework. While one or more mechanisms may dominate the growth of the electrodeposit, the proposed formulation defines a road map to design dendrite- free, lithium-based anodes as a stepping stone to identify alternate chemistries that are dendrite-free.