Complicating the inspection process is that nuclear reactors are submerged in water to maintain cooling. Consequently, direct manual inspection of a reactor’s components is not feasible due to high temperatures and radiation hazards. Technicians review remotely recorded videos of the underwater reactor surface, a procedure that is vulnerable to human error.

Researchers are proposing a “deep learning” framework called a naïve Bayes-convolutional neural network to analyze individual video frames for crack detection. An innovative “data fusion scheme” aggregates the information extracted from each video frame to enhance the overall performance and robustness of the system.

Findings are detailed in a paper appearing in October in the journal IEEE Transactions on Industrial Electronics. The paper was authored by Purdue electrical and computer engineering doctoral student Fu-Chen Chen and Jahanshahi, who is the director of Purdue’s Smart Informatix Laboratory. The paper is available online at http://ieeexplore.ieee.org/document/8074762/.

Convolutional neural networks are a form of artificial intelligence called deep learning that have been instrumental in the development of various commercial products capable of facial and speech recognition.

The new system detects cracks in overlapping “patches” in each video frame while the data fusion algorithm scheme is capable of tracking the crack from one frame to the next. The approach achieves a 98.3 percent success rate, which is significantly higher than other state-of-the-art approaches, Jahanshahi said. (A YouTube video is available at https://youtu.be/8O8FFey4GJo)

The United States is the world’s largest supplier of commercial nuclear power, which provides around 20 percent of the nation’s total electric energy. Between 1952 to 2010, there have been 99 major nuclear power incidents worldwide that cost more than $20 billion, with 56 incidents occurring in the United States, according to the findings of a 2010 study published in the Journal of Contemporary Asia. Incidents are defined as either resulting in the loss of human life or more than $50,000 of property damage, the amount the federal government uses to define major energy accidents that must be reported.

“One important factor behind these incidents has been cracking that can lead to leaking,” Jahanshahi said. “Nineteen of the above incidents were related to cracking or leaking, costing $2 billion. Aging degradation is the main cause that leads to function losses and safety impairments caused by cracking, fatigue, embrittlement, wear, erosion, corrosion and oxidation.”

Although several vision-based crack detection approaches have been developed for concrete, rock, or pavement surfaces, only a few approaches consider crack detection on metallic surfaces. The majority of existing approaches focus on detecting cracks in a single image.

“If a crack is not detected in these single images or a noisy pattern is falsely detected as a crack in the image, no other information is available to correct the detection results,” he said.

To develop and evaluate the proposed system, videos of 20 underwater specimens representing internal nuclear power plant components were collected. Samples were scanned at 30 frames per second, and the convolutional neural network examined each frame for cracks. The data were provided by the Electric Power Research Institute (EPRI), a nonprofit organization funded by the electric utility industry. 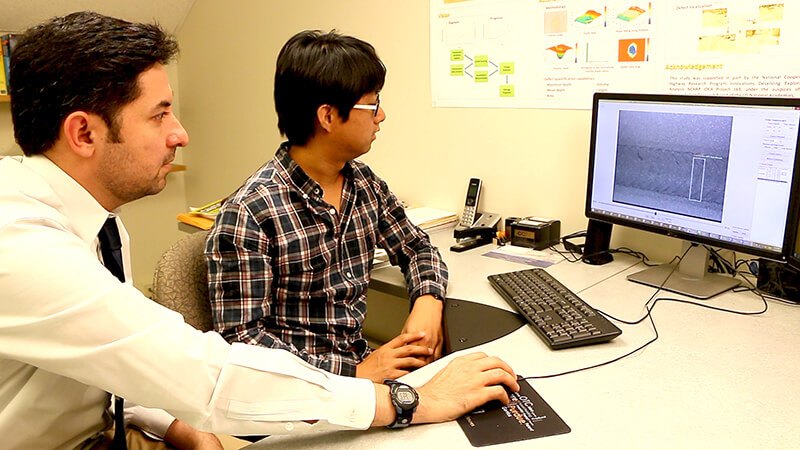 As the data-fusion algorithm observes a crack from one frame to the next it is able to account for changing configurations due to the moving camera, pinpointing the location of the crack. The algorithm mimics the ability of human vision to scrutinize cracks from different angles, which is important because some cracks are obscured by the play of light and shadow, Jahanshahi said.

“Data fusion comes up with more robust decision making than would otherwise be possible,” he said.

The approach also uses powerful graphical processing units to train the neural network how to detect cracks with a dataset that contains around 300,000 crack and non-crack patches, he said.

A patent application on the crack-detection technology has been filed through the Purdue Research Foundation’s Office of Technology Commercialization.

The Purdue research team also is using deep learning to detect corrosion in photographs of metal surfaces, a technology that might be used to inspect structures such as light poles and bridges. That research has been detailed in a paper accepted for publication in the Journal of Structural Health Monitoring. The paper was authored by Purdue undergraduate student Deegan Atha, who also recently presented findings during the International Workshop on Structural Health Monitoring at Stanford University.

Future research will include work to further improve the technologies.

Regular inspection of nuclear power plant components is important to guarantee safe operations. However, current practice is time-consuming, tedious, and subjective which involves human technicians review the inspection videos and identify cracks on reactors. A few vision-based crack detection approaches have been developed for metallic surfaces, and they typically perform poorly when used for analyzing nuclear inspection videos. Detecting these cracks is a challenging task since they are tiny, and noisy patterns exist on the components’ surfaces. This study proposes a deep learning framework called NB-CNN to analyze individual video frames for crack detection while a novel data fusion scheme is proposed to aggregate the information extracted from each video frame to enhance the overall performance and robustness of the system. To this end, a Convolutional Neural Network (CNN) is proposed to detect crack patches in each video frame while the proposed data fusion scheme maintains the spatiotemporal coherence of cracks in videos, and the Naïve Bayes decision making discards false positives effectively. The proposed framework achieves 98.3% hit rate against 0.1 false positives per frame that is significantly higher than state-of-the-art approaches as presented in this paper.