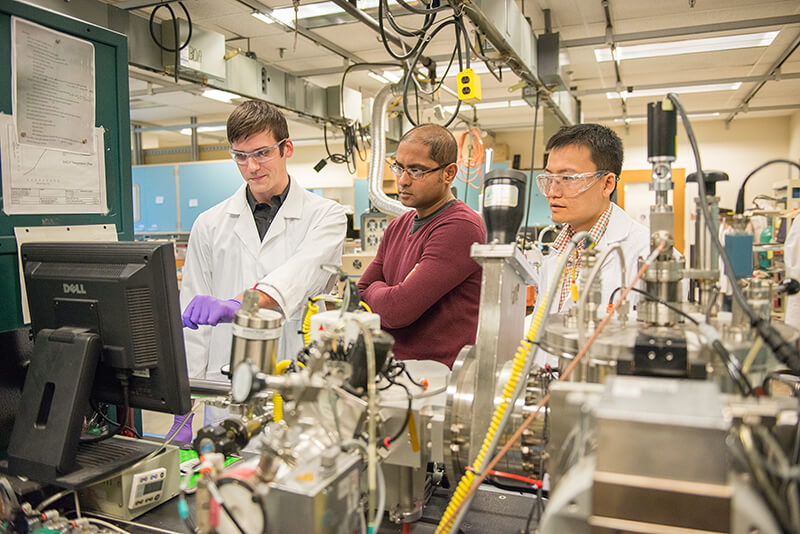 WEST LAFAYETTE, Ind. – A “quantum material” that mimics a shark’s ability to detect the minute electric fields of small prey has been shown to perform well in ocean-like conditions, with potential applications from defense to marine biology.

The material maintains its functional stability and does not corrode after being immersed in saltwater, a prerequisite for ocean sensing. Surprisingly, it also functions well in the cold, ambient temperatures typical of seawater, said Shriram Ramanathan, a Purdue professor of materials engineering.

Such a technology might be used to study ocean organisms and ecosystems and to monitor the movement of ships for military and commercial maritime applications.

“So, it has potentially very broad interest in many disciplines,” said Ramanathan, who led research to develop the sensor, working with a team that included Purdue postdoctoral research associate Zhen Zhang and graduate student Derek Schwanz. 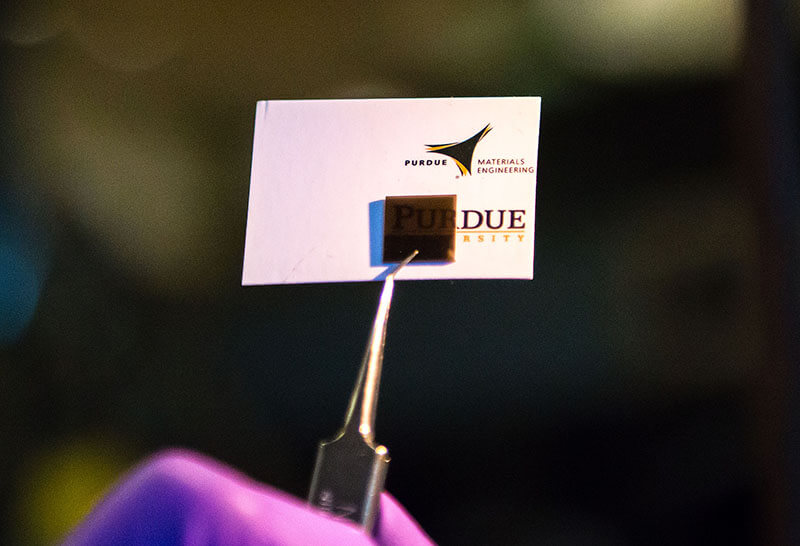 The sensor is made from a “quantum material” that, surprisingly, functions well in the cold, ambient temperatures typical of seawater (Purdue University image/Marshall Farthing) Download image

Findings are detailed in a research paper appearing online Dec. 18 in the journal Nature. The paper’s lead authors were Zhang and Schwanz, working with colleagues at Argonne National Laboratory, Rutgers University, the National Institute of Standards and Technology, the Massachusetts Institute of Technology, the Canadian Light Source at the University of Saskatchewan, Columbia University, and the University of Massachusetts. A complete list of co-authors is included in the abstract.

The new sensor was inspired by an organ near a shark’s mouth called the ampullae of Lorenzini, which is capable of detecting small electric fields from prey animals.

“This organ is able to interact with its environment by exchanging ions from seawater, imparting the so-called sixth sense to sharks,” Zhang said.

The organ contains a jelly that conducts ions from seawater to a specialized membrane located at the bottom of the ampulla. Sensing cells in the membrane allow the shark to detect bioelectric fields emitted by prey fish.

Because this material can conduct protons very fast, the researchers wondered whether they might develop a sensor that mimics the shark’s organ.

“We have been working on this for a few years,” Ramanathan said. “We show that these sensors can detect electrical potentials well below one volt, on the order of millivolts, which is comparable to electric potentials emanated by marine organisms. The material is very sensitive. We calculated the detection distance of our device and find a similar length scale to what has been reported for electroreceptors in sharks.”

The quantum effect causes the material to undergo a dramatic “phase change” from a conductor to an insulator, which allows it to act as a sensitive detector. The material also exchanges mass with the environment, as protons from the water move into the material and then return to the water, going back and forth.

“Having a material like that is very powerful,” Schwanz said.

Metals such as aluminum, for example, immediately form an oxide coating when placed in seawater. The reaction protects against corrosion but prevents further interaction with the environment.

“Here, we start with the oxide material and we are able to maintain its functionality, which is very rare,” Ramanathan said.

“If the material transmits light differently, then you can use light as a probe to study the property of the material and that is very powerful. Now you have multiple ways to study a material, electrically and optically.”

The material was tested by immersing it in simulated ocean water environments designed to cover the wide ranges of temperature and pH found across earth’s oceans. In future work, researchers plan to test the devices in real oceans instead and may team with biologists to apply the technology to broader studies.

A technique called neutron reflectometry was performed at NIST. Adding protons to the crystal lattice of the quantum material causes the lattice to swell slightly. Shining a neutron beam on the material allows researchers to detect this swelling and determine that the protons moved into the material.

“Neutrons are very sensitive to hydrogen, making neutron reflectometry the ideal technique to determine whether or not the swelling and huge resistance change is caused by hydrogen entering the material from salt water,” said Joseph Dura, a NIST physicist.

The Purdue portion of the research was funded by the U.S. Army Research Office, Air Force Office of Scientific Research and the National Science Foundation.

Note to Journalists: A copy of the research paper is available from Emil Venere, Purdue News Service, at 765-494-4709, venere@purdue.edu, or by contacting the Nature Press Office at press@nature.com. A YouTube video is available at https://youtu.be/f3UsD-1qGkE. Other multimedia materials are available on Google Drive at https://goo.gl/RW7moV.  The materials were prepared by Erin Easterling, digital producer for the Purdue College of Engineering, 765-496-3388, easterling@purdue.edu.

*These authors contributed equally to this work

Correspondence and requests for materials should be addressed to S.R. (email: shriram@purdue.edu)

Designing materials for function in harsh environments such as conductive aqueous media is a problem of broad interest to a range of technologies including energy, ocean monitoring and biological applications. Grand challenges include retaining stability and morphology while simultaneously being able to interact dynamically with the surrounding environment that is a prerequisite for any sensing modality. Materials that respond to mild stimuli through collective phase transitions and amplify signals could open up new avenues for sensing. Here, we present the discovery of an electric-field driven water-mediated reversible phase change in a prototypical strongly correlated quantum material, SmNiO3 (SNO)1–3. The material is stable in saltwater, does not corrode, and allows ambient temperature exchange of protons with the surrounding water medium with concurrent modification in electrical resistance and optical properties being capable of multi-modal readout. Besides operating both as a thermistor and pH sensor, this material can detect sub-volt electric potentials in salt water. We postulate that such SNO devices could be used in oceanic environments for monitoring of electrical signals from a variety of maritime vessels and sea creatures.