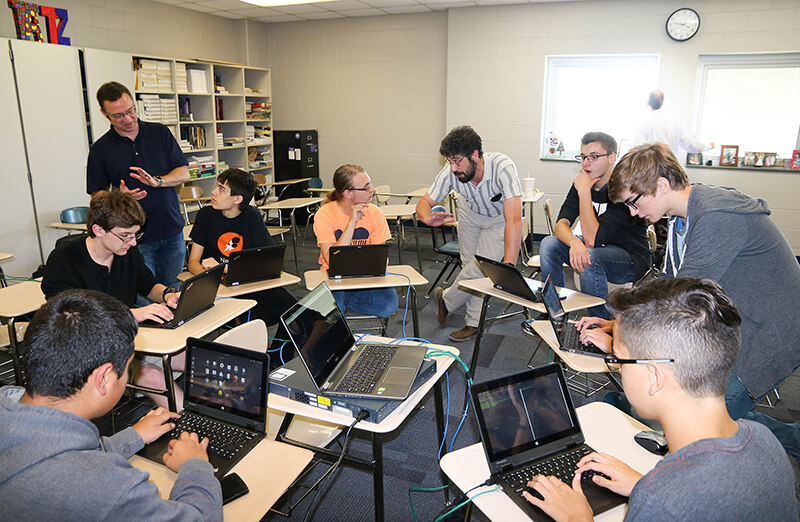 WEST LAFAYETTE, Ind. – At the upcoming SC17 international supercomputing conference, a team of students from Harrison High School in West Lafayette, Ind., trained by volunteers from Purdue University, will become the first ever all-high school team to compete in the conference’s main student supercomputing competition.

The students have designed and built their own supercomputer, capable of running a variety of real-world scientific software applications, including a mystery application that won’t be announced until the start of the competition. They will be evaluated based on how much science they can accomplish during the 48-hour challenge while staying under a 3,000-watt power limit, about enough to power a hair dryer and a toaster.

They have been working for months to get ready. Harrison junior Jacob Sharp says that the challenges along the way have all been part of the fun.

“I would have to say the most rewarding experience is when you struggle to get something working and after a few days you figure out why,” he says. “After getting it to run successfully the feeling of accomplishment is second to none.”

In addition to Sharp, the students on the team are senior Jeremy Meyer, juniors Callum Gundlach, Chris Page and Nick Nolte, and sophomore Nick Frooninckx. Sophomore Eduardo Butron is an alternate. Purdue research computing staff members Lev Gorenstein and Chuck Schwarz were the volunteers who helped train the team, which is advised by Doug Klumpe, a Harrison math teacher and the coach of Harrison’s robotics competition team. The supercomputing team is sponsored by Hewlett Packard Enterprise and Matrix Integration.

Purdue has fielded teams of college students in the Student Cluster Competition since it began. Gorenstein says that the idea to field a local high school team had been on his mind for a while, given the tremendous educational benefits associated with participation on a student supercomputing team, but he wasn’t quite sure where to find the right students. He was connected to Klumpe and the Harrison robotics team by a colleague whose son had been on that team. They pitched the idea at a meeting of the robotics team, and the students readily signed on to Harrison’s new supercomputing team.

Although only six students will have the opportunity to travel to Denver as official team members, the advisors maintained an “open door” policy during team meetings and a total of 14 Harrison students participated in some form, learning about supercomputing, scientific computing and Purdue’s nation-leading research computing resources along the way.

The students have been preparing for the competition since the beginning of 2017. After submitting a proposal, they found out in April that they were one of 16 teams chosen to compete at SC17, which will be held in Denver from Nov. 12-17. They’ll compete against team, made up mostly of college students, from Europe, Asia and the United States.

Like many on the team, Page had no knowledge of how to operate a supercomputer before this experience, but he’s learned a lot in a short amount of time and is now capable of successfully running the standard benchmarking software used to rank the world’s top supercomputers, as well as various scientific applications.

“The progression in my skills has happened far more quickly than I could have ever imagined,” Page says.

The Harrison students are looking forward to competing in Denver, both for the technical challenges the competition will bring and also for the opportunity to learn more about the world of high-performance computing and get to know others in the field.

“I’ve made a couple of great connections at Purdue already, and I’m excited to make more when we get to Denver,” says Gundlach.