J. Paul Robinson is the SVM Professor of Cytomics in Purdue's College of Veterinary Medicine and a professor in Purdue's Weldon School of Biomedical Engineering. His company, Cytomics Analytical LLC, is pursuing a way to repurpose high-definition Blu-ray technology, popular for watching videos and listening to music, to diagnose early-stage cancers and monitor their treatments. Cytomics Analytical was awarded a National Institutes of Health Phase I Small Business Innovation Research Grant for $147,364. (Purdue Research Foundation/Oren Darling) Download image

Cytomics Analytical LLC, led by J. Paul Robinson, the SVM Professor of Cytomics in Purdue's College of Veterinary Medicine and professor in Purdue's Weldon School of Biomedical Engineering, has received a National Institutes of Health Phase I Small Business Innovation Research Grant, also known as America’s Seed Fund, for $147,364. The company also has received a $50,000 grant from the Indiana Economic Development Corp.

“We were finally able to convince someone at NIH that this is worthwhile,” Robinson said. “It seems improbable that you could do this, but we have conducted extensive research and are confident it will work and it will be revolutionary.”

The funding will be used to develop a low-cost diagnosis platform called MY-Blu that will use high-resolution measuring devices in Blu-ray to find nanoparticles released in blood in early stages of cancer, as well as from many syndromes, Robinson said. Though it is technologically challenging to accurately detect particles smaller than 100 nanometers, Blu-ray technology has shown promise in detecting particles that are 10 nanometers to 20 nanometers.

“Cancer cells break down when they are attacked by the immune system and release these microparticles. But we can’t see them unless we use very expensive equipment, like an electron microscope, and it takes a lot of time,” he said. “If those microparticles are important, we ought to be able to find and identify them very quickly. We believe our modifications to Blu-ray technology will allow us to achieve this.” 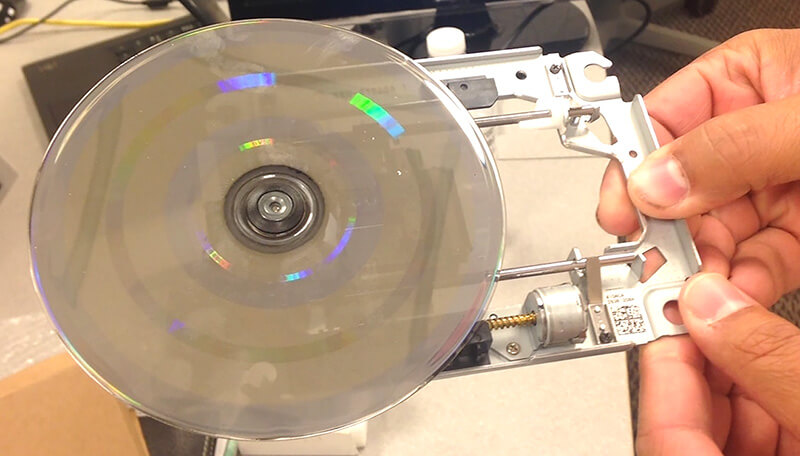 This is a specially designed disc on the disc read movement from a standard Blu-ray readers. This disc has a special layer on the top, creating a network of microgrooves below where the liquid sample is measured. Cytomics Analytical LLC researchers hope the disc will help find nanoparticles nanoparticles released in blood in early stages of cancer, as well as from many syndromes. (Photo provided) Download image

Robinson said most technology can’t be used to try to detect microparticles because the particles are so small they don’t reflect light. But he believes Blu-ray devices, which are optical disc data storage units designed to replace DVDs and already in many people’s homes around the world, can be repurposed to detect these microparticles.

The grants specifically will be used to adapt Blu-ray devices to detect fluorescent molecules attached to the nanoparticles.

“Once we do that, we can show proof of principle that this works,” Robinson said.

The challenge is repurposing the Blu-ray technology to do something it wasn’t intended to do. Robinson said what gives him confidence it can be done is that his chief technology officer, Masanobu Yamamoto, an adjunct professor in Basic Medical Sciences in Purdue’s College of Veterinary Medicine, who is a former lead engineer for the Sony Corp. and played a key role in developing Blu-ray technology.

“He is Mr. Blu-ray, because he's one of maybe a half-dozen people in the entire world who fully understand how this technology actually works. He's recognized that we can take this technology and completely repurpose it,” Robinson said. “We have adopted some unique features of the technology that have never been used for the purposes we intend and designed electronics to reveal key signals.”

A specially designed disc for Cytomics Analytical LLC with a 100 micron glass cover over the fluidic channels. Four ports are shown where liquid samples are placed for measurement find nanoparticles nanoparticles released in blood in early stages of cancer, as well as from many syndromes. Two ports are identified by the white circles. The inset shows the actual channel under the glass cover. (Photo provided). Download image

Among the challenges Robinson and Yamamoto had to overcome was developing a sensor that could accurately measure signals from a particle that was over 10 billionths of a meter in size.

“You discover that you have to develop components that you thought would have been out there,” Robinson said.

The cost of finding these nanoparticles using an approach Yamamoto calls Optical Phase Detection will be low because Blu-ray devices are already mass produced, Robinson said.

Cytomics Analytical has applied for patents to use MY-Blu technology to search for pre-cancer, and several other important diseases. The company is based in West Lafayette and has received help in its work from the Purdue Research Foundation.