Purdue poised to improve sorghum for millions with $5 million grant 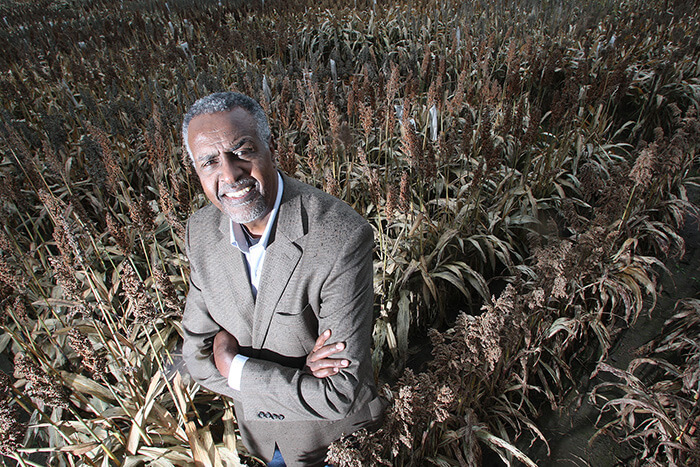 Gebisa Ejeta, a distinguished professor in the Department of Agronomy at Purdue University and the 2009 World Food Prize laureate, received a $5 million grant from the Bill & Melinda Gates Foundation to further his team’s research on stronger varieties of sorghum.

WEST LAFAYETTE, Ind. – Purdue University scientists will develop stronger, more versatile varieties of sorghum that have the potential to reach millions of African farmers, thanks to a $5 million, five-year grant from the Bill & Melinda Gates Foundation.

The foundation’s grant is the second for Gebisa Ejeta, a distinguished professor in the Department of Agronomy and director of the Purdue Center for Global Food Security. Ejeta, the 2009 World Food Prize laureate, was recognized for his work in developing and distributing high-yielding varieties of sorghum that are also drought-tolerant and resistant to striga, a parasitic weed that robs maize, sorghum, rice, pearl millet and sugarcane of necessary nutrients. Striga can devastate a crop and impacts more than 100 million people in Africa.

Over the last four years, Ejeta, along with his students and research collaborators, uncovered the basic genetic and biological processes that control striga resistance in sorghum. They identified a gene involved with the release of a chemical from sorghum roots that signals striga seed to germinate and attach to those roots.

That has led to the creation of new sorghum varieties that combine striga- and drought-resistance more readily using molecular technology. So far, 961 tons of seed have been distributed to more than 400,000 farmers in Ethiopia and Tanzania.

“With more high-throughput phenotyping and the ability to sequence a large slate of genotypes, we identified an important gene that is foundational for imparting striga resistance,” Ejeta said. “It helps to move that gene with confidence and consider new ways of exploiting that gene. Some of that we’ve already been working on.”

This next phase of the program will focus on advancements in biological research, specifically identifying more genes involved in imparting broad-based and durable striga resistance in sorghum and other crops.

“We would have multiple genes that we can move around and pyramid together, so there is no risk of one gene breaking down in the future,” Ejeta said.

“This creates opportunities for farmers and small businesses to engage in gainful employment and develop the agricultural industry in these countries,” Ejeta said.