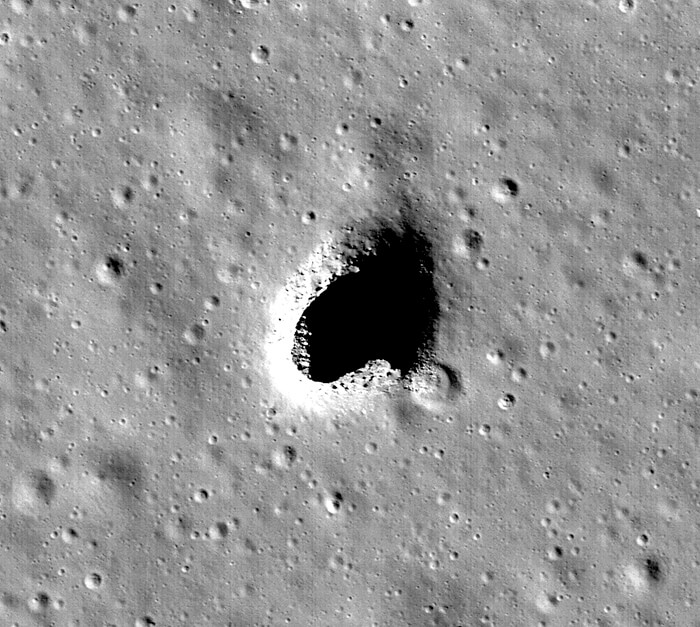 WEST LAFAYETTE, Ind. — A study published in Geophysical Research Letters confirms the existence of a large open lava tube in the Marius Hills region of the moon, which could be used to protect astronauts from hazardous conditions on the surface.

No one has ever been on the moon longer than three days, largely because space suits alone can’t shield astronauts from its elements: extreme temperature variation, radiation, and meteorite impacts. Unlike Earth, the moon has no atmosphere or magnetic field to protects its inhabitants.

The safest place to seek shelter is the inside of an intact lava tube, according to the study.

Lava tubes are naturally occurring channels formed when a lava flow develops a hard crust, which thickens and forms a roof above the still-flowing lava stream. Once the lava stops flowing, the tunnel sometimes drains, forming a hollow void.

“It’s important to know where and how big lunar lava tubes are if we’re ever going to construct a lunar base,” said Junichi Haruyama, a senior researcher at JAXA, Japan’s space agency. “But knowing these things is also important for basic science. We might get new types of rock samples, heat flow data and lunar quake observation data.”

JAXA analyzed radar data from the SELENE spacecraft to detect underlying lava tubes. Near the Marius Hills Skylight, an entrance to the tube, they found a distinctive echo pattern: a decrease in echo power followed by a large second echo peak, which they believe is evidence of a tube. The two echoes correspond to radar reflections from the moon’s surface and the floor and ceiling of the open tube. The team found similar echo patterns at several locations around the hole, indicating there may be more than one.

The city of Philadelphia is shown inside a theoretical lunar lava tube. Image by: Purdue University/David Blair Download image

SELENE’s radar system wasn’t designed to detect lava tubes – it was built to study the origins of the moon and its geologic evolution. For these reasons, it didn’t fly close enough to the moon’s surface to get extremely accurate information on what is (or isn’t) underneath.

When the JAXA team decided to use their data to try and find lava tubes, they consulted scientists from the GRAIL mission, a NASA effort to collect high-quality data on the moon’s gravitational field. By surveying the areas where GRAIL had identified mass deficits, or less mass under the surface, they narrowed down the data they needed to analyze.

“They knew about the skylight in the Marius Hills, but they didn’t have any idea how far that underground cavity might have gone,” said Jay Melosh, a GRAIL co-investigator and Distinguished Professor of Earth, Atmospheric and Planetary Sciences at Purdue University. “Our group at Purdue used the gravity data over that area to infer that the opening was part of a larger system. By using this complimentary technique of radar, they were able to figure out how deep and high the cavities are.”

Lava tubes exist on Earth, but their lunar counterparts are much larger. For a lava tube to be detectable by gravity data, it would need to extend several kilometers in length and at least one kilometer in height and width – which means the lava tube near the Marius Hills is spacious enough to house one of the United States’ largest cities, if the gravity results are correct.

The existence of lava tubes on the moon has been speculated in the past, but this combination of radar and gravity data provides the clearest picture of what they look like and how big they are yet. This information might be more useful than previously expected.

At the first meeting of the National Space Council in decades, Vice President Mike Pence announced that the Trump administration will redirect America’s focus in space to the moon. This marks a fundamental change for NASA, which abandoned plans to send people to the moon in favor of Mars under President Obama.

“We will return NASA astronauts to the moon – not only to leave behind footprints and flags, but to build the foundation we need to send Americans to Mars and beyond,” Pence said.

Intact lunar lava tubes offer a pristine environment to conduct scientific examination of the Moon's composition and potentially serve as secure shelters for humans and instruments. We investigated the SELENE Lunar Radar Sounder (LRS) data at locations close to the Marius Hills Hole (MHH), a skylight potentially leading to an intact lava tube, and found a distinctive echo pattern exhibiting a precipitous decrease in echo power, subsequently followed by a large second echo peak that may be evidence for the existence of a lava tube. The search area was further expanded to 13.00–15.005°N, 301.85–304.01°E around the MHH and similar LRS echo patterns were observed at several locations. Most of the locations are in regions of underground mass deficit suggested by GRAIL gravity data analysis. Some of the observed echo patterns are along rille A, where the MHH was discovered, or on the southwest underground extension of the rille.