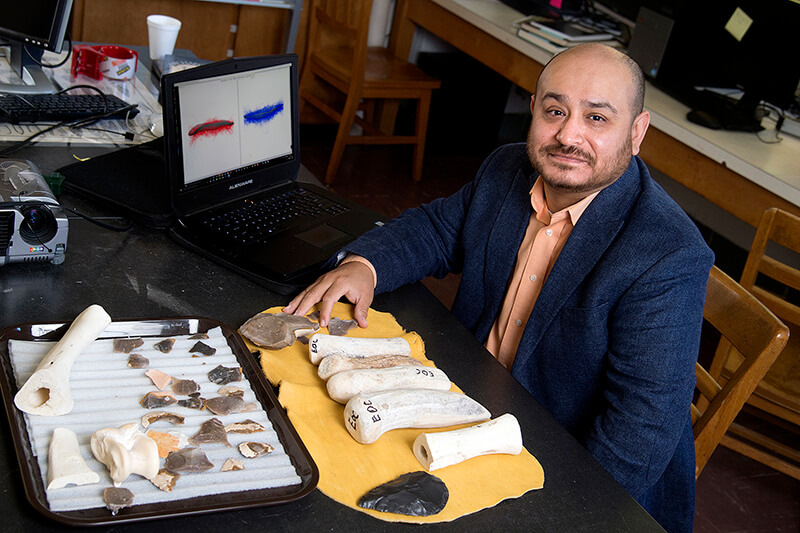 Archaeologist and biostatistician Erik Otárola-Castillo leads the research team that used 3-D imaging, shape analysis and Bayesian statistics to identify butchery cut marks with an 88 percent success rate in classifying butchery behaviors. The 3D imaging technology is similar to what engineers use to measure scratches on microchips and surgical blade sharpness. The findings are published in the Journal of Archaeological Science. (Purdue University photo/Mark Simons) Download image

WEST LAFAYETTE, Ind. — Researchers, led by a Purdue University anthropology professor, have found that statistical methods and 3D imaging can be used to accurately measure animal bone cut marks made by prehistoric human butchery, and to help answer pressing questions about human evolution.

Archaeologist and biostatistician Erik Otárola-Castillo leads the research team that used 3-D imaging, shape analysis and Bayesian statistics to identify butchery cut marks with an 88 percent success rate in classifying butchery behaviors. The 3-D imaging technology is similar to what engineers use to measure scratches on microchips and surgical blade sharpness.

“This approach represents a major improvement in accuracy when compared to many archaeological methods, and improving this technique will help us get the human evolution story correct,” Otárola-Castillo said. “By strengthening quantitative methods to evaluate archaeological evidence, we will be able to learn more about early humans much more quickly.”

The findings are published in the Journal of Archaeological Science. Otárola-Castillo is an assistant professor of the Department of Anthropology.

Human-made stone tools leave cut marks on animal bone, such as sheep, deer or bison, through butchery. These cut marks can vary in size from 1 to 5 centimeters, but the depth of the cuts is often tiny, measuring at approximately 1/15 of a millimeter. Archaeologists often attempt to distinguish between cut marks made by a human’s stone tool, which leaves a “V” shape, and other damage, such as trampling by a hooved animal, which can leave marks with more of a “U” shape.

Archaeologists have attempted to identify butchering marks since the 1800s. While the methods of analyzing bone marks have improved over the decades, there is still quite a lot of uncertainty and lack of consensus on how they are best measured. Current measurement techniques range from naked eye qualitative assessments to high-powered microscopy, such as scanning electron microscopy or micro-photogrammetry.

There are cases when marks can be ambiguous. In 2010, a couple of research teams published contradicting findings regarding bone marks from a prehistoric site, Dikika in Ethiopia. Results from their analyses varied so much they disagreed whether the marks were made by humans’ tools or animals’ hooves, or perhaps scratched by sand particles or other rock edges. Fresh debate now contends that some of these marks could have been made by feeding crocodiles.

“The tension over this debate has been great, because the source of the cuts matters significantly. If made by stone tools, then this is an example of stone tool-use by some of the earliest human ancestors,” Otárola-Castillo said. “Recently, researchers sent bones with cut marks to various experts for analysis. The goal was to evaluate the convergence of different experts’ assessments of the characteristics of the bone marks using traditional methods. Alarmingly, results showed that the qualitative assessments were inconsistent between all experts. Similar concerns also relate to modern forensics evidence, so our work is a finding that may be of interest to that field as well.”

Otárola-Castillo, Marean, Thompson, and Shannon P. McPherron from the Max Planck Institute for Evolutionary Anthropology, began working on methodological improvements for bone mark analysis in 2010. Other team members are Jacob A. Harris from Arizona State University, Purdue graduate student Melissa G. Torquato and Purdue undergraduate student Hannah C. Hawkins. McPherron and Marean were members of one of the teams evaluating bones from the Dikika site in Ethiopia.

In their new study, Otárola-Castillo and the team used more than 40 cuts and slices made by volunteer butchers on sheep bones using stone tools. A “cut” represents a 90-degree incision angle, and a “slice” represents a 45-degree incision angle. The researchers then measured the cuts with a profilometer, a 3-D microscope that measures topography, roughness and layer thickness in the micro- and nanometer ranges. After measuring them, the researchers conducted a 3-D shape and size analysis of the curves and surfaces to compare the cut marks.

“Once the digital data were compared, we used Bayesian statistics, which provide a quantitative measure of scientific believability. For example, given the evidence, the probability of accurately determining the identity of a mark on a bone is 88 percent in this case,” Otárola-Castillo said.

This research was funded by a variety of sources, including the National Science Foundation, Margo Katherine Wilke Undergraduate Research Fund at Purdue University, Purdue’s College of Liberal Arts ASPIRE, and a grant from the John Templeton Foundation to the Institute of Human Origins at Arizona State University.

Purdue’s Department of Anthropology is housed in the College of Liberal Arts.

Studies of bone surface modifications (BSMs) such as cut marks are crucial to our understanding of human and earlier human subsistence behavior. Over the last several decades, however, BSM identification has remained contentious, particularly in terms of identifying the earlier instances of hominin butchery; there has been a lack of consensus over how to identify or differentiate marks made by humans and non-human actors and varying effectors. Most investigations have relied on morphology to identify butchery marks and their patterning. This includes cut marks, one of the most significant human marks. Attempts to discriminate cut marks from other types of marks have employed a variety of techniques ranging from subjectively characterizing cut mark morphology using the naked eye, to using high-powered microscopy such as scanning electron microscopy (SEM) or micro-photogrammetry. More recent approaches use 3D datasets to obtain even more detailed information about mark attributes and apply those to the fossil record. Although 3D datasets open promising new avenues for investigation, analyses of these datasets have not yet taken advantage of the full 3D surface morphology of BSM. Rather, selected cross-sectional slices of 3D scans have been used as proxies for overall shape. Here we demonstrate that 3D geometric morphometrics (GM), under the “Procrustes paradigm” and coupled with a Bayesian approach, probabilistically, discriminates between marks caused by different butchery behaviors. AT the same time, this approach provides a complete set of 3D morphological measurements and descriptions. Our results strengthen statistical confidence in cut mark identification and offer a novel approach that can be used to discriminate subtle differences between cut mark types in the fossil record. Furthermore, this study provides an incipient digital library with which to make future quantitative comparisons to archaeological examples, including contentious specimens that are key to understanding the earliest hominin butchery.