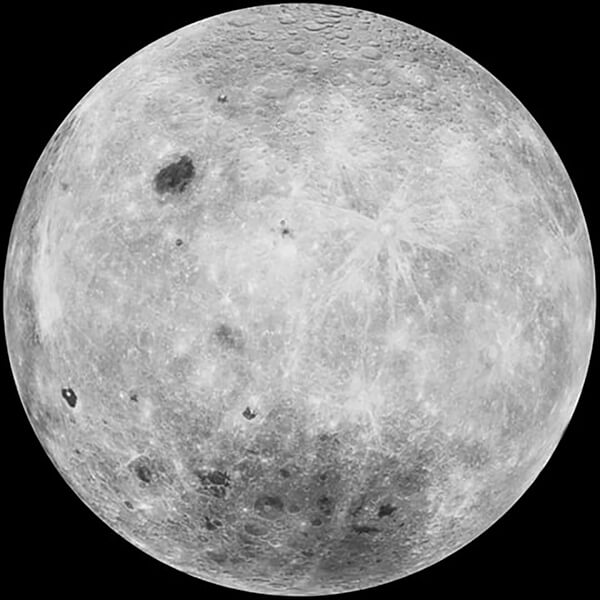 Far side of the moon. The South Pole-Aitken basin is the darker area at the bottom of this image. Photo by NASA/Goddard Space Flight CenterScientific Visualization Studio. Download image

WEST LAFAYETTE, Ind. — Scientists have long assumed that all the planets in our solar system look the same beneath the surface, but a study published in Geology on Oct. 4 tells a different story.

“The mantle of the earth is made mostly of a mineral called olivine, and the assumption is usually that all planets are like the Earth,” said Jay Melosh, Distinguished Professor of Earth, Atmospheric and Planetary Sciences at Purdue University, who led the study. “But when we look at the spectral signature of rocks exposed deep below the moon’s surface, we don’t see olivine; we see orthopyroxene.”

Around 4 billion years ago, an asteroid collided with the moon and created the largest and deepest impact on the moon: the South Pole-Aitken basin. The collision exposed lunar mantle in the basin and splashed up material onto the far side of the moon.

Melosh’s group used remote sensing to identify what minerals compose the splashed-up material. When sunlight hits the moon, it interacts with materials on the surface; because different materials absorb different wavelengths of light, researchers can tell what materials are on the surface by looking at the reflected signal.

“This is a really important tool to understand the surface of the moon without touching it,” said Briony Horgan, an assistant professor of planetary science at Purdue, who worked on the study. “Before we can send a rover or a spacecraft somewhere, we need to be able to map the surface.”

To make sure they were looking for the splashed material in the right place, the research team created a three-dimensional simulation of the asteroid’s collision with the moon. If the moon’s upper mantle was mostly olivine, that spectral signature would be visible over large parts of the most elevated region of the moon (the highlands). Instead, the researchers found large quantities of orthopyroxene in the highlands and interior of the South Pole-Aitken basin. Olivine is present in those regions too, but it isn’t the dominant component, as was previously assumed.

A sample of the Earth’s upper mantle appears mostly green (olivine) with specks of black (orthopyroxene). It’s likely the moon’s mantle is just the opposite. These new findings will force scientists to rethink their models for the formation and evolution of the Moon and why it might be different from Earth.

The sparse occurrence of the mineral olivine in reflection spectra of the Moon’s surface, as well as in deep-seated lunar rocks, has long puzzled lunar geologists because it is expected that the largest impact basins, particularly the 2500 km diameter South-Pole Aitken (SPA) basin, should have exposed the lunar mantle. Using 3D numerical impact simulations, we show that even in our most conservative cases the SPA basin must have sampled the Moon’s upper mantle to depths of 100 km and inevitably have spewed this material onto the farside highlands. The spectra of this region are, however, dominated by the signature of Low Calcium Pyroxene (LCP), not olivine. We thus argue that, in contrast to the upper mantle of the Earth, the Moon’s upper mantle is dominated by LCP. This signature also characterizes the mantle of the large main belt asteroid 4 Vesta and suggests that the current paradigm of olivine-rich planetary upper mantles may require revision.