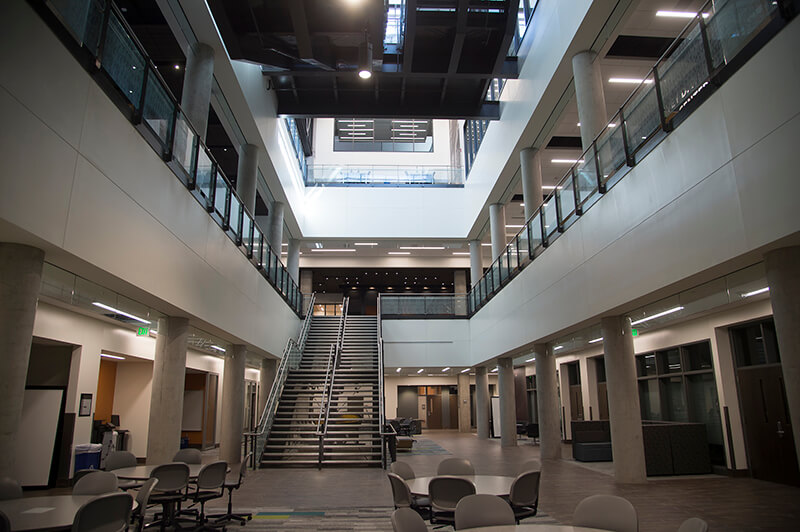 The Wilmeth Active Learning Center will house 27 active learning classrooms and be a blend of classroom and library space. Its industrial look and feel are a tribute to the old power plant that used to stand on the site. (Purdue University Photo/Mark Simons)

WEST LAFAYETTE, Ind. — The Thomas S. and Harvey D. Wilmeth Active Learning Center, which will serve as a new centerpiece in the heart of Purdue University’s campus and as a daily destination for thousands of students, will be up and running as the academic year begins.

The center, under construction for more than two years, offers students a unique learning experience through active learning and integrated study rooms and library spaces.

“The Wilmeth Active Learning Center was designed to blend the learning experience of a classroom with those learning experiences that happen in the library,” he says. “Studies have shown that students retain information to a much greater extent when they learn by doing rather than by memorization, and the WALC is designed with that in mind.” 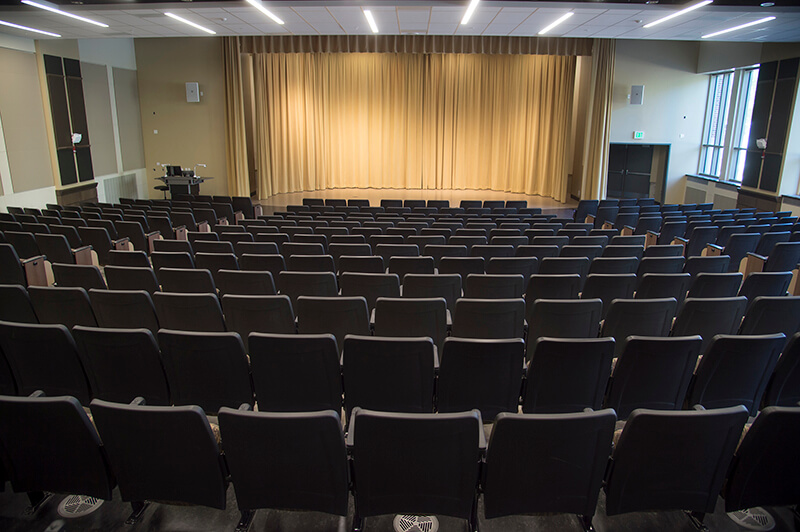 The Hiler Theater will be used for classroom and study space, and as a production set if needed. The room can host classes during the day and become a study area after hours. (Purdue University Photo/Mark Simons) Download image

Active learning is a term used to describe a teaching method that makes students become active in their own learning instead of the professor simply lecturing to the class for the entire period, he says. In an active learning class setting, the instructor may lecture for a portion of the class, but a majority of the time is spent on projects or problem solving that the students, by working in teams, investigate and determine the solutions.

“The Wilmeth Active Learning Center is a glimpse of the future,” Purdue President Mitch Daniels says. “This innovative approach to classroom design and teaching is part of Purdue’s commitment to transforming education and giving our students the best chance to truly learn and succeed.”

The WALC will have 27 active learning classrooms, each designed to meet a variety of scenarios. Some look more traditional, while others have tables with up to six chairs to promote collaboration instead of the usual single-user desk. Mullins says that sight lines are important in the rooms so that the instructor can be anywhere in the room and still be visible and accessible.

He also says that the location of the classrooms is important because nearly every classroom is adjacent to the parts of the WALC that comprise the library, denoted by carpeting instead of tile floor, making hands-on projects and research easier to implement.

The entire building, including the classrooms and library, becomes one big study space after hours, giving students the best chance to succeed and making the building a highly efficient space, Mullins says. 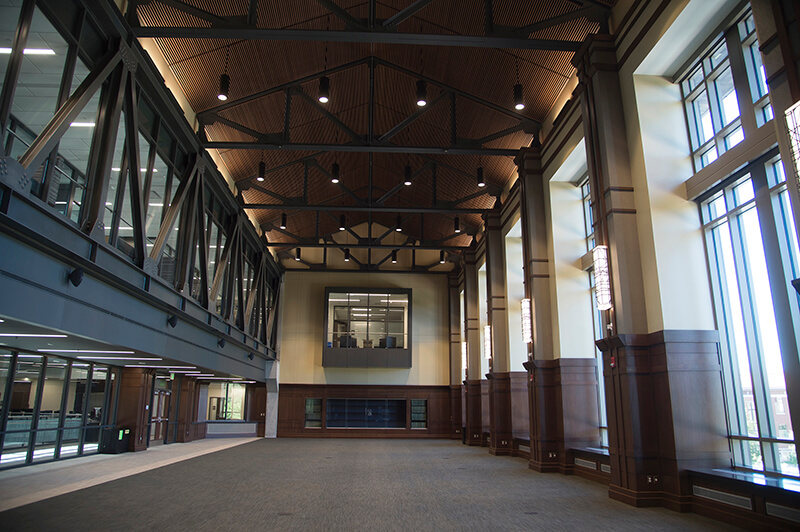 The Reading Room will be the only quiet room in the building. Students will get a great view of the Bell Tower as they study throughout the school year. (Purdue University Photo/Mark Simons) Download image

Venues, such as the Data Visualization Experience Lab of Purdue (D-VELoP), provide high-tech spaces for students to work hands-on during class and after hours. The Hiler Theater provides a space for classes during the day and a study room or practice space for students when classroom hours end. Engineering and science libraries faculty offices also are located in the WALC. Mullins says this makes it easy for students and faculty to work together when needed outside of the classroom. There also is an Au Bon Pain (French for “the good bread”) bakery for when students need a snack or coffee to keep them going.

Built on the site of the old power plant, the WALC is rich with reproductions of historic photographs of the Purdue campus from the Purdue Libraries’ Virginia Kelly Karnes Archives and Special Collections Research Center. Artifacts and photographs from the working 1924 Heating and Power Plant North can be found throughout the facility. These items memorialize the rich legacy of this central site on the Purdue campus. A smartphone tour enhances the exhibits in the WALC by providing information and interactive activities designed to make a visitor’s experience an extension of the center’s active learning philosophy. To begin the smartphone tour, go to PurdueWALC.oncell.com or dial 765-245-3595.

The naming of the building recognizes and honors Purdue alumni, the late Thomas S. Wilmeth, who earned his electrical engineering degree in 1935, and the late Harvey D. Wilmeth, who earned his chemical engineering degree in 1940. The brothers founded Scot Industries Inc. in Milwaukee in 1949. Tom ran and built the business with seed money provided by the shrewd investments of younger brother Harvey. Scot Industries is the worldwide quality and technological leader in the specialty tubing and bar business. Scot Industries continues to grow as a privately held company with 13 plants worldwide.

Thomas Wilmeth's long history of support for the university and Purdue Libraries began in 1991, when he made a contribution to fund Libraries' first electronic database. In 1993 he joined the Libraries Dean's Advisory Council and served for 10 years.

Purdue awarded him an honorary doctorate of engineering information literacy in 2013 in recognition of his understanding and appreciation of the need to use published research outside of academe to advance industrial methods and to create new engineering processes and technological applications. In 2004 he received the President's Council Distinguished Pinnacle Award for his philanthropy to Purdue Libraries.

Harvey Wilmeth (1918-2007) graduated from Purdue with a degree in chemical engineering, his true passion was economics and economic theory, according to Thomas in 2014.

Harvey founded the original Center for Advanced Macroeconomic Policy at the University of Wisconsin-Milwaukee following his retirement in 1983 as vice president and economist at the Northwestern Mutual Life Insurance Co. He served as an adjunct professor of economics at the University of Wisconsin-Milwaukee and received an honorary doctorate of economics from UWM in 2006. While at Purdue, Harvey was a member of the Purdue Student Union Board.