“Combating antimicrobial resistance is an international priority in medical and health research. This NIH award is a testament of Dr Zhou’s innovative research with high quality in this important field,” said Eric Barker, dean of Purdue’s College of Pharmacy.

Gram-negative bacteria, which cause pneumonia and other infections, are hard to treat. They have a double-cell membrane to shield them and make enzymes that can break down antibiotics. They also exchange genes, sometimes across species, that facilitate drug resistance.

Polymyxins, a class of old antibiotics developed in the 1950s, have been called on as the last resort against MDR Gram-negative bacteria. Traditional parenteral administrations (shots) of polymyxins aren’t very effective against lung infections because of low drug exposure in the lungs. Polymyxins can also be toxic to the kidneys.

Zhou’s team wants to develop inhalable powder formulations with better delivery efficiency and chemical and physical stability. These new formulations will incorporate two or more antibiotics in a single particle, maximizing bacterial killing and minimizing the likelihood of resistance. The team expects the success of the project will lead to therapies that will save many lives from fatal MDR lung infections.

Zhou will collaborate with professors Jian Li of Monash University of Australia and Alan Forrest of the University of North Carolina. The grant, “Combating deadly Gram-negative lung infections: an inhalation and systems approach,” will provide $2.4 million over the next four years.

“It is truly outstanding that Dr. Zhou was awarded this R01 on his first submission to NIH, less than two years since he joined our department. It is not surprising, though, considering that he has published 50 papers and garnered more than $4 million research funding in the past five years,” said Tonglei Li, interim head of the Department of Industrial and Physical Pharmacy at Purdue. “We are excited for this large award and will continue to support him achieving scientific advancement.” WEST LAFAYETTE, Ind. – Researchers are proposing the use of stochastic units to perform precise arithmetic calculations like digital computers, but invertibly. The new probabilistic spin logic, or PSL, system is made up of building-block units called p-bits.

The concept was described in a paper that appeared recently in the journal Physical Review X. The research was performed by a Purdue University team led by Supriyo Datta, the Thomas Duncan Distinguished Professor of Electrical and Computer Engineering.

Digital computers use strings of zeroes and ones called bits to represent information in a binary code. Quantum computers use q-bits tapping into a phenomenon known as superposition that allows a bit to be both zero and one at the same time. PSL uses a p-bit which is either zero or one at a given time, but it fluctuates rapidly between the two with probabilities that can be controlled.

“The fact that a p-bit is stochastic sounds like a bad thing, but we have shown earlier that p-transistors based on p-bits can be very useful for problems involving optimization and Bayesian inference. In this paper we showed that they can even be useful for precise arithmetic functions like adders and multipliers,” said postdoctoral research associate Kerem Camsari, the first author of the paper. “Moreover, it is invertible: an adder circuit can operate as a subtractor, and a multiplier circuit can operate as a divider or a factorizer – and this can be important since many computational problems are known to be harder when going in one direction than the other.”

The research was funded by the Center for Spintronic Materials, Interfaces and Novel Architecture, or C-SPIN, as well as the Purdue-led Institute for Nanoelectronics Discovery and Exploration (INDEX), where researchers are working on experiments implementing p-bits and p-transistors.

The paper, authored by Camsari; graduate students Rafatul Faria and Brian M. Sutton; and Datta, is available online at https://journals.aps.org/prx/abstract/10.1103/PhysRevX.7.031014.  More information is available by contacting the paper’s lead author, Camsari, at kcamsari@purdue.edu. 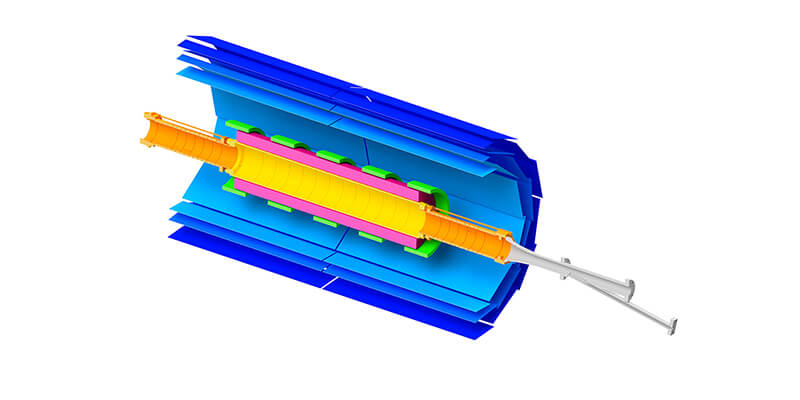 This is a cut-away schematic of the ALPHA-2 antihydrogen production and trapping region. For clarity, the vacuum wall and the cryostat for the superconducting magnets are not shown. Antiproton and positron plasmas are prepared to either side of the production region before being mixed to form antihydrogen at the center of the minimum-B trap. All of the components shown are immersed in a uniform, 1 T axial magnetic field provided by an external solenoid, not illustrated. (Photo provided) Download image

WEST LAFAYETTE, Ind. — A team of international researchers has developed a tool capable of observing the hyperfine structure of antihydrogen, producing the most accurate measurement of antimatter yet.

The ALPHA Collaboration, which is based at the European Organization for Nuclear Research (CERN), is a large team of international scientists working to uncover the differences between matter and antimatter. They chose to study hydrogen and antihydrogen because they’re the simplest forms of matter and antimatter.

“Our current understanding of how the universe behaves demands that the properties of matter and antimatter are exactly the same,” said Francis Robicheaux, a member of the ALPHA collaboration and physics professor at Purdue University. “Using this understanding, we can’t explain why the universe is mostly matter. It seems that we must be missing something.”

The ALPHA collaboration published its first research on the properties of antihydrogen in 2012, but the team’s most recent findings are much more accurate. The original study used very few atoms, meaning the results weren’t nearly as precise as in the present work. The team has now improved its technique to trap 10 times as many atoms as before and take more accurate measurements.

This improvement clears a path for increasingly accurate experiments with antimatter. If there is a difference between hydrogen and antihydrogen, it’s much smaller than previous studies let on, Robicheaux said.