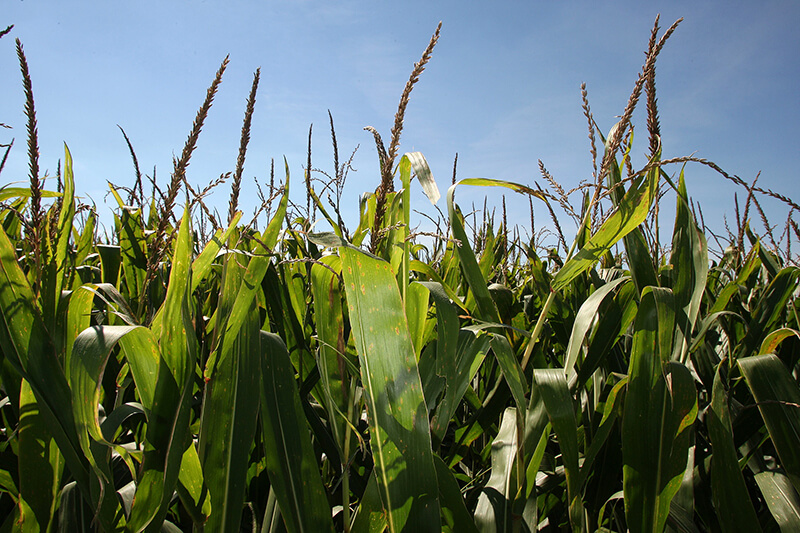 The research, which revealed a strong relationship between actual nitrogen recovery and nitrous oxide emissions, was recently published in Frontiers in Plant Science.

He said the study’s findings should be used to guide any agronomic research about the impact of agricultural production on nitrous oxide emissions.

“Our models indicated that a careful selection of appropriate nitrogen rate applied at the right time can both increase nitrogen recovery efficiency, lower the nitrogen balance left in the field, and reduce nitrous oxide emissions,” Vyn said. “If you’re going to measure greenhouse gas emissions, you must also measure the whole plant nitrogen uptake for each nitrogen fertilizer management program being tested.”

Purdue research scientist Rex Omonode, who analyzed data from throughout the United States and Canada dating back to 2002, said the research was based on 1,375 plot-level observations. “It was exciting to test a common but unproven hypothesis that an increase of plant nitrogen uptake and/or recovery efficiency will reduce nitrous oxide emission during crop production,” Omonode said. Omonode and Vyn were helped in their analysis by research co-authors from the United States Department of Agriculture–Agricultural Research Service, and and Agriculture and Agri-Food Canada.

The link between crop production and nitrous oxide emissions has been the subject of numerous research studies, particularly throughout the United States, which is the No. 1 corn producer in the world. In 2016, 94 million acres of corn were planted throughout the country.

Many studies have either focused on greenhouse gas emissions in direct relation to fertilizer amounts applied or focused on efficiency of plant nutrient uptake without measuring greenhouse gases. “Too few researchers have looked at both simultaneously,” Vyn said. “This study distinguished the proportion of fertilizer nitrogen applied that was taken into the plants and what actually went into the atmosphere during the growing season.”

Higher rates of emissions result when producers use more fertilizer than necessary, which can occur when producers are trying to guard against high nitrogen losses from soil when excessive rainfall occurs prior to plants locking up the plant-available mineral nitrogen with their roots. Nitrous oxide emissions climb steeply when a producer adds an extra 50 pounds of fertilizer per acre above the agronomic optimum nitrogen rates for their region, Omonode said.

With further studies of nitrous oxide losses, the research indicated, it is essential to gauge fertilizer recovery in all grain crops. “It doesn’t matter if it’s corn, wheat or other crops, it’s important to look at nitrogen recovery when looking at greenhouse gas emissions,” Omonode said.

Few studies have assessed the common, yet unproven, hypothesis that an increase of plant nitrogen (N) uptake and/or recovery efficiency (NRE) will reduce nitrous oxide (N2O) emission during crop production. Understanding the relationships between N2O emissions and crop N uptake and use efficiency parameters can help inform crop N management recommendations for both efficiency and environmental goals. Analyses were conducted to determine which of several commonly used crop N uptake-derived parameters related most strongly to growing season N2O emissions under varying N management practices in North American maize systems. Nitrogen uptake-derived variables included total aboveground N uptake (TNU), grain N uptake (GNU), N recovery efficiency (NRE), net N balance (NNB) in relation to GNU [NNB(GNU)] and TNU [NNB(TNU)], and surplus N (SN). The relationship between N2O and N application rate was sigmoidal with relatively small emissions for N rates <130 kg ha−1, and a sharp increase for N rates from 130 to 220 kg ha−1; on average, N2O increased linearly by about 5 g N per kg of N applied for rates up to 220 kg ha−1. Fairly strong and significant negative relationships existed between N2O and NRE when management focused on N application rate (r2 = 0.52) or rate and timing combinations (r2 = 0.65). For every percentage point increase, N2O decreased by 13 g N ha−1 in response to N rates, and by 20 g N ha−1 for NRE changes in response to rate-by-timing treatments. However, more consistent positive relationships (R2 = 0.73–0.77) existed between N2O and NNB(TNU), NNB(GNU), and SN, regardless of rate and timing of N application; on average N2O emission increased by about 5, 7, and 8 g N, respectively, per kg increase of NNB(GNU), NNB(TNU), and SN. Neither N source nor placement influenced the relationship between N2O and NRE. Overall, our analysis indicated that a careful selection of appropriate N rate applied at the right time can both increase NRE and reduce N2O. However, N2O reduction benefits of optimum N rate-by-timing practices were achieved most consistently with management systems that reduced NNB through an increase of grain N removal or total plant N uptake relative to the total fertilizer N applied to maize. Future research assessing crop or N management effects on N2O should include N uptake parameter measurements to better understand N2O emission relationships to plant NRE and N uptake.