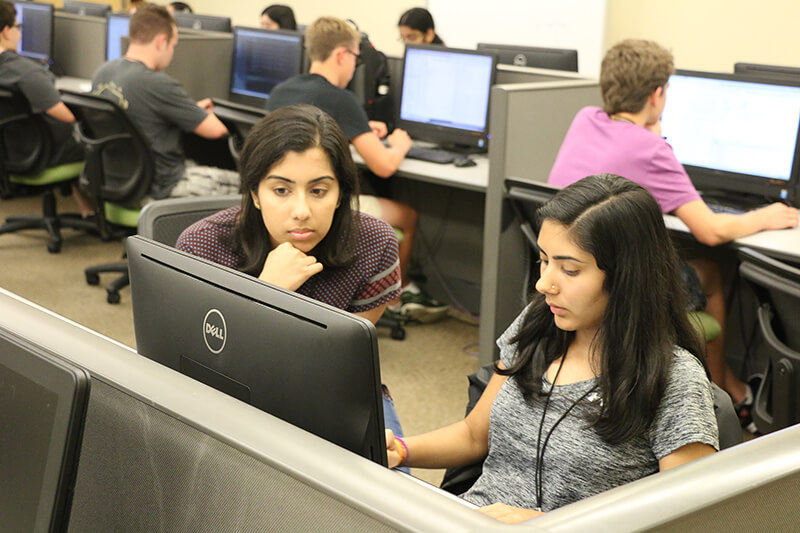 Students participate in Bridge 2017, a two-week summer immersion program that prepares incoming freshmen who might have less programming experience for their first computer science course at Purdue. Undergraduate applications to the computer science program have increased so much that the admission rate has declined even as the quality of applicants improves, said Sunil Prabhakar, head of the Department of Computer Science. Download image

WEST LAFAYETTE, Ind. — Undergraduate enrollment in Purdue University’s Department of Computer Science has more than doubled since 2012, a circumstance that will help fill a national shortage.

In recent years, educators and employers in computer science have received a wakeup call – they need employees to fill the hundreds of thousands of vacant jobs in the field, especially women and underrepresented minorities.

There are currently 530,000 open computing jobs nationwide, and the National Center for Women and Information Technology predicts that only 41 percent of jobs in the field will be filled by 2024. Purdue President Mitch Daniels recognized the school’s potential to help fill those gaps, and in 2013, he named expanding computer science one of his Purdue Moves. Purdue Moves is a range of initiatives at the West Lafayette campus designed to broaden Purdue's global impact and enhance educational opportunities for its students. All of the moves fall into four broad categories: science, technology, engineering and math (STEM) leadership; world-changing research; transformative education; and affordability and accessibility.

Purdue received more than 4,000 computer science undergraduate applications for fall semester 2017. Applications have increased so much that the admission rate has continued to decline even as the quality of applicants improves, said Sunil Prabhakar, head of the Department of Computer Science.

Growth of the field isn’t an isolated phenomenon. Across the nation, universities have struggled to keep up with the rising number of students who want to take classes or major in computer science. A report by the Computing Research Association found that the number of computer science majors at doctoral institutions in North America tripled between 2006 and 2017, and the trend is likely to continue.

Many universities are having a difficult time meeting the needs of all the students who want to take computer science courses, according to the report. Shortage of classroom space, insufficient numbers of faculty and instructors to teach courses, and increased faculty workloads are among the top challenges.

Purdue’s computer science students are doing well, during school and after graduation. Ninety-five percent of first-year students stay in the major, though many American universities grapple with retention in STEM majors. They also receive the highest undergraduate starting salary at Purdue and a post-graduation job placement rate of nearly 100 percent.

Despite these achievements, diversity in the field is lacking. Women earn 57 percent of all undergraduate degrees in the United States, but only 18 percent of computer and information sciences degrees, according to the National Center for Women and Information Technology.

As a result, educators across the nation have recognized the need to attract more women to the field and have been making a concerted effort to do so.

Twenty-one percent of first-year computer science majors at Purdue are now women, compared to 13 percent in 2015. Female faculty members have also doubled since 2012. Adrian Thomas, diversity specialist for the Department of Computer Science at Purdue, said targeted marketing to women is responsible for this increase.

“We really got the word out about what Purdue does and how important it is to have women here,” said Thomas.

The department also split CS 180, a first-year course that all computer science students are required to take. The course was divided into sections for more and less experienced students, and the majority of women in the 2016 class enrolled in the less experienced section.

“The effort is really making a difference because they’re starting the course with fewer assumptions. We’re meeting them where they are and getting them where they need to go,” Thomas said. “Both sections end up at the same place, but they start out differently.”

Although these efforts have been successful in attracting female students to the department, ethnic minority students are still underrepresented. This problem has only been recognized very recently at the national level, Thomas said, but she expects that programs like Black Girls CODE and CODE2040 will help solve it.