Low-cost “microsatellites” and “nanosatellites” far smaller than conventional spacecraft, have become increasingly prevalent. Thousands of the miniature satellites might be launched to perform a variety of tasks, from high-resolution imaging and internet services, to disaster response, environmental monitoring and military surveillance.

“They offer an opportunity for new missions, such as constellation flying and exploration that their larger counterparts cannot economically achieve,” said Alina Alexeenko, a professor in Purdue University’s School of Aeronautics and Astronautics. She has led research to develop a new micropropulsion system that uses ultra-purified water.

“Water is thought to be abundant on the Martian moon Phobos,” she said. “making it potentially a huge gas station in space. Water is also a very clean propellant, reducing risk of contamination of sensitive instruments by the backflow from thruster plumes.”

Research findings about the new system are detailed in a paper being presented during the 31st AIAA/USU Conference on Small Satellites, Aug. 5-10 in Logan, Utah. A YouTube video about the work is available at https://youtu.be/zP72l08yD3Q.

The new system, called a Film-Evaporation MEMS Tunable Array, or FEMTA thruster, uses capillaries small enough to harness the microscopic properties of water. Because the capillaries are only about 10 micrometers in diameter, the surface tension of the fluid keeps it from flowing out, even in the vacuum of space. Activating small heaters located near the ends of the capillaries creates water vapor and provides thrust. In this way, the capillaries become valves that can be turned on and off by activating the heaters. The technology is similar to an inkjet printer, which uses heaters to push out droplets of ink. 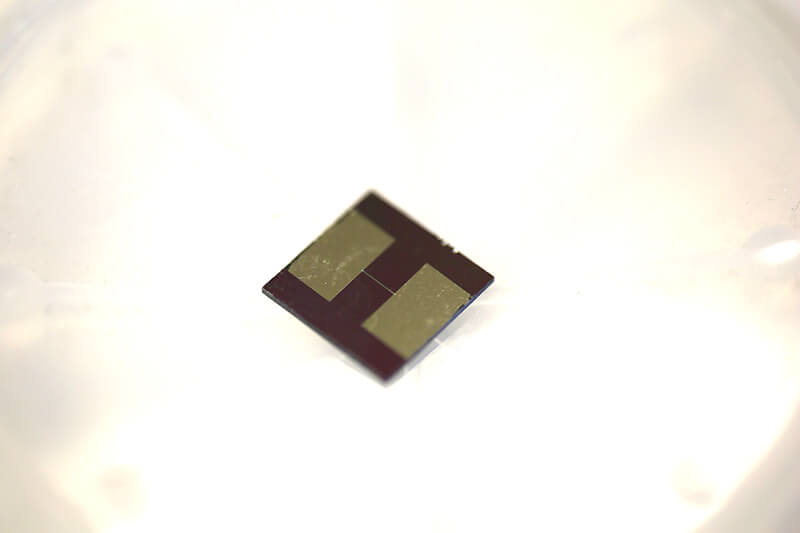 “It’s very unusual for undergraduate students to have such a prominent role in advanced research like this,” Alexeenko said.

The students performed the research as part of a propulsion design course.

CubeSats are made up of several units, each measuring 10-centimeters cubed. In the Purdue research, four FEMTA thrusters loaded with about a teaspoon of water were integrated into a one-unit CubeSat prototype and tested in a vacuum. The prototype, which weighs 2.8 kilograms, or about six pounds, contained electronics and an inertial measurement unit sensor to monitor the performance of the thruster system, which rotates the satellite using short-lived bursts of water vapor.

Typical satellites are about the size of a school bus, weigh thousands of pounds and sometimes cost hundreds of millions of dollars. And while conventional satellites require specialized electronics that can withstand the harsh conditions of space, CubeSats can be built with low-cost, off-the-shelf components. Constellations of many inexpensive, disposable satellites might be launched, minimizing the impact of losing individual satellites.

However, improvements are needed in micropropulsion systems to mobilize and precisely control the satellites.

“There have been substantial improvements made in micropropulsion technologies, but further reductions in mass, volume, and power are necessary for integration with small spacecraft,” Alexeenko said.

The FEMTA technology is a micro-electromechanical system, or a MEMS, which are tiny machines that contain components measured on the scale of microns, or millionths of a meter. The thruster demonstrated a thrust-to-power ratio of 230 micronewtons per watt for impulses lasting 80 seconds.

“This is a very low power,” Alexeenko said. “We demonstrate that one 180-degree rotation can be performed in less than a minute and requires less than a quarter watt, showing that FEMTA is a viable method for attitude control of CubeSats.”

Although the researchers used four thrusters, which allow the satellite to rotate on a single axis, a fully functional satellite would require 12 thrusters for 3-axis rotation.

The team built the system with inexpensive, commercially available devices that are integral for the “internet of things,” an emerging phenomenon in which many everyday objects such as appliances and cars have their own internet addresses.

“These undergraduate students integrated all the IOT technologies, which, frankly, they know more about than I do,” she said.

The inertial measurement unit handles 10 different types of measurements needed to maneuver and control the satellite. An onboard computer wirelessly receives signals to fire the thruster and transmits motion data using this IMU chip.

“What we really want to do next is integrate our system into a satellite for an actual space mission,” she said.

The research involved a collaboration with NASA’s Goddard Space Flight Center through the space agency’s SmallSat Technology Partnership program, which provided critical funding since the concept inception in 2013.

A patent application for the concept has been filed through the Purdue Research Foundation’s Office of Technology Commercialization. The nozzles for the system were fabricated in the Scifres Nanofabrication Laboratory in the Birck Nanotechnology Center in Purdue’s Discovery Park.

Note to Journalists: A copy of the research paper is available from Emil Venere at Purdue University, 765-494-4709, venere@purdue.edu. A YouTube video is available at https://youtu.be/zP72l08yD3Q. Other multimedia materials are available on Google Drive at https://goo.gl/dvyBGv. The materials were prepared by Erin Easterling, digital producer for the Purdue College of Engineering, 765-496-3388, easterling@purdue.edu.

The need for compact, low-power micropropulsion systems to increase the maneuverability and lifespan of CubeSats has increased significantly as nanosat missions have become more ubiquitous and complex. The Film- Evaporation MEMS Tunable Array (FEMTA) thruster is a novel micropropulsion technology that exploits thermally controlled microcapillaries to generate micronewton thrust using liquid water as propellant. Here we present the design and testing of four FEMTA thrusters integrated into a 1U CubeSat prototype with the necessary electronics and an inertial measurement unit sensor to monitor the 1U-quad-thruster FEMTA CubeSat Model’s attitude. The model was tested in the Purdue University High Vacuum Facility’s large vacuum chamber for single-axis control using the FEMTA propulsion system. The experimental data on CubeSat rotation at a slew rate of about 5 deg/sec activated by FEMTA systems with <1 Watt input power show that FEMTA is a viable method for attitude control of CubeSats.