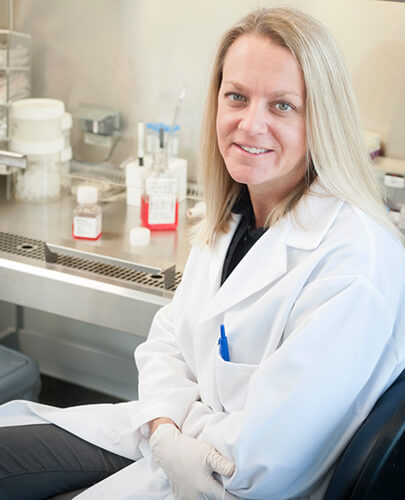 WEST LAFAYETTE, Ind. — Researchers at Purdue University have discovered a mechanism for delivering tumor-suppressing microRNAs that eliminates the need for toxic delivery vehicles.

MicroRNAs, or short strands of RNA, play a key role in regulating gene expression. In the lab, they’ve been successful in shrinking tumors; the best of them act like a “multidrug cocktail.” However, getting the microRNA to the tumor hasn’t been easy.

“RNAs are inherently unstable; they’re subject to being degraded in the bloodstream. It’s been hypothesized that if we want to use RNA as a therapy, we have to protect it,” said Andrea Kasinski, a biology professor at Purdue who worked on the study. “Protective vehicles are usually some sort of nanoparticle, often a lipid-encapsulated particle. Although the RNA is protected, the protection typically comes at a price.”

These particles tend to be a little larger, so penetrating the dense architecture of the tumor can be difficult, she said. Many of these lipids are also toxic.

In an attempt to solve this problem, Kasinski’s team abandoned the delivery vehicle entirely. Instead, they conjugated the RNA to a molecule of folate. The folate receptor is overexpressed on cancer cells but very low on normal cells, which is why they can target a tumor and avoid healthy cells. Folate is also essential to the human diet, which eliminates the toxicity problem.

“Folate is generally pro-growth. That’s why cancer cells overexpress the receptor – they want more folate,” Kasinski said. “We’re just hijacking that idea and saying, ‘Okay, you can have all the folate you want, but we’re going to conjugate it to a warhead that will hopefully knock out the cancer cell.’”

Unprotected RNAs can be degraded by two mechanisms – an exonuclease, which cuts the ends and chews inward, or an endonuclease, which cuts into the middle. By attaching the RNA to a folate, the researchers protected at least one end. Whether this is the end that usually gets chewed into, they’re not sure, but folate appears to stabilize the RNA.

As cancer treatment moves toward targeted therapies, drug resistance is becoming a cause for concern. Cancer cells evolve rapidly, so if the agent used to treat it only targets one gene, that gene is likely to become resistant. MicroRNA often have many relevant targets, making it unlikely that the cancer cells will develop resistance.

“We think microRNAs are exceptional for that reason,” Kasinski said.

This seems like a promising method for cancer treatment, but so far, it’s only been tested in mice. The same microRNA used in this study, miR-34a, made it to clinical trial and failed. Kasinski’s team believes that one of the reasons it failed is because of the delivery vehicle, but there’s no way to be sure. Even if the RNA is somehow toxic, they’re delivering it at a much lower dose than what was used in the trial, and whatever isn’t taken up by the tumor is cleared from the organism very fast.

While this kind of therapy may not replace other methods for cancer treatment, it could help make them more effective. The microRNA in question is cytostatic, not cytotoxic – it won’t kill a cell, but it will stop it from growing. Given in combination with chemotherapy, it would break down the cells’ defenses, making them more sensitive to the cytotoxic agent.

“I think everything we do scientifically, especially in a cancer lab, moves us closer to an effective cancer therapy. But there’s still more we need to do,” Kasinski said. “Maybe there are other microRNAs that will be better.”

FolamiRs: Ligand-targeted, vehicle-free delivery of microRNAs for the treatment of cancer

MicroRNAs are small RNAs that negatively regulate gene expression posttranscriptionally. Because changes in microRNA expression can promote or maintain disease states, microRNA-based therapeutics are being evaluated extensively. Unfortunately, the therapeutic potential of microRNA replacement is limited by deficient delivery vehicles. MicroRNAs are delivered in the absence of a protective vehicle. The method relies on direct attachment of microRNAs to folate (FolamiR), which mediates delivery of the conjugated microRNA into cells that overexpress the folate receptor. We show that the tumor-suppressive FolamiR, FolamiR-34a, is quickly taken up both by triple- negative breast cancer cells in vitro and in vivo and by tumors in an autochthonous model of lung cancer and slows their progression. This method delivers microRNAs directly to tumors in vivo without the use of toxic vehicles, rep- resenting an advance in the development of nontoxic, cancer-targeted therapeutics.