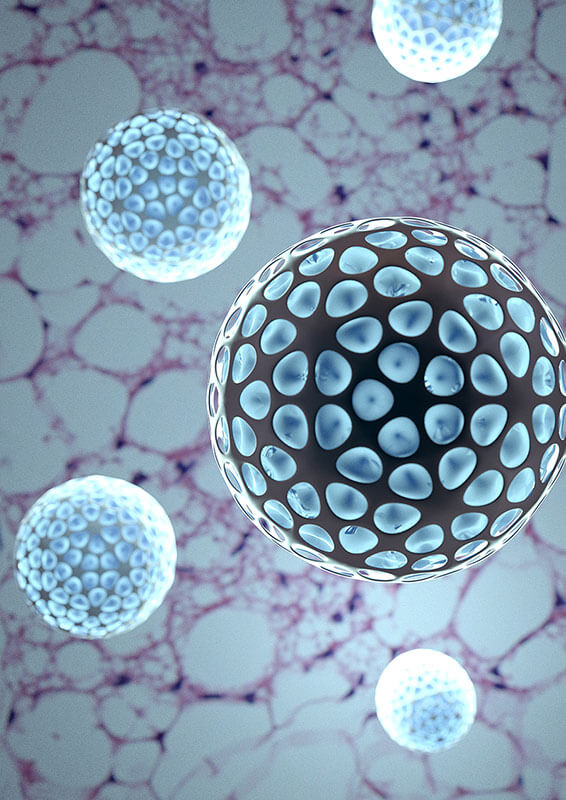 WEST LAFAYETTE, Ind. – In a potential breakthrough for the treatment of obesity and diabetes, Purdue University scientists have found a way to deliver a drug directly to stored white fat cells to turn them into more easily burned brown fat cells.

White adipose tissue, most associated with obesity, is a type of fat that collects in the body for long-term storage of energy. It’s possible humans evolved to store white fat to act as insulation and energy storage. However, as we have become over-fed and less active, we have less need for the energy stored in white fat and it over accumulates, leading to metabolic diseases such as diabetes and obesity. More than one-third of Americans are obese, and nearly 10 percent have diabetes, according to the Centers for Disease Control and Prevention.

Brown fat is more readily burned by the body, dissipating energy into heat. Scientists, including Purdue’s Meng Deng, assistant professor of agricultural and biological engineering, biomedical engineering and materials engineering, and Shihuan Kuang, professor of animal sciences, have been looking for ways to decrease white fat in favor of brown fat through a signaling pathway that is known to regulate cell differentiation and cell identity.

In Notch signaling, a cell sends a signal to a neighboring cell to control that neighbor’s gene transcription and its identity. Disrupting that signal in a progenitor cell destined to become one of the undesirable white fat cells leads to the creation of brown fat.

Deng and Kuang report in the journal Molecular Therapy that they have for the first time used an engineered polymeric nanoparticle for controlled delivery of a Notch-signaling inhibitor directly to white fat cells. In a mouse model, the nanoparticle, made of an FDA-approved polymer known as PLGA, and containing the drug Dibenzazepine, disrupted Notch signaling and led to the creation of brown fat cells.

“We can control the delivery to specific sites in the body, in this case the bad fat or white fat cells,” Deng said. “Once those engineered particles are inside the fat cells, they can slowly release the drug in the cells, potentially limiting the off-target interactions in other tissue in the body and reducing the frequency of dosing.”

Kuang said the particles, which are less than 200 nanometers in size, are readily taken up by the fat cells through a process called endocytotic trafficking and subsequently undergo a rapid endo-lysosome escape to the cytosol within the cell membrane. 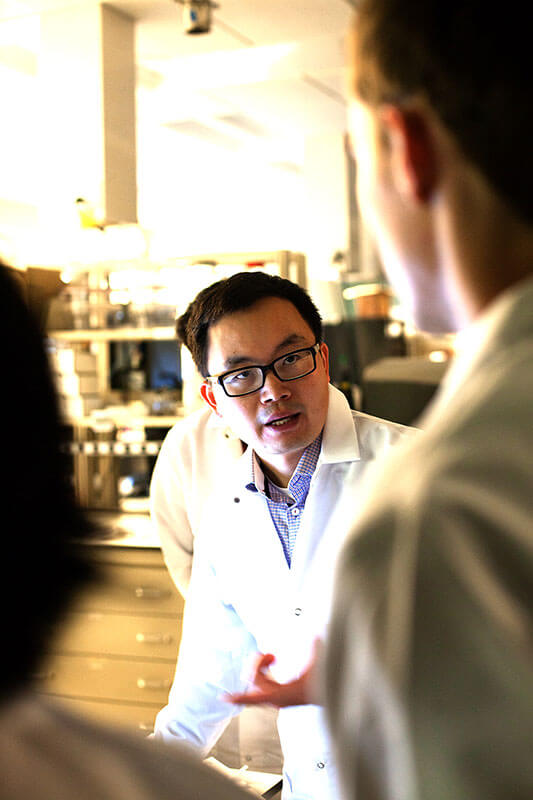 A team from Purdue University, including assistant professor Meng Deng, conducted research that could lead to a breakthrough in treating obesity and diabetes. (Purdue Agricultural Communication photo/Tom Campbell) Download image

“The particle was actually picked up by the cell. It’s like it’s being eaten by the cells,” Kuang said. “This limits the particle from going anywhere else.”

Since the nanoparticles containing the drug are injected into fat, Deng said it may be possible to develop therapies that target fat loss in specific parts of the body. In the mouse model, targeting a specific fat depot with weekly injections of nanoparticles is sufficient to bring about systemic improvements in glucose tolerance and insulin sensitivity.

Being overweight is also a contributing factor to developing type 2 diabetes. Removing excess fat would likely decrease the odds of developing the disease.

Deng has filed a patent for the process and has created a startup, Adipo Therapeutics LLC, to continue testing and eventually commercializing the technology.

The research was funded in part by the Showalter Trust, the Purdue Research Foundation, the National Science Foundation and the National Institutes of Health.

Inhibition of Notch signaling via systemic drug administration triggers conversion of white adipocytes into beige adipocytes (browning) and reduces adiposity. However, translation of this discovery into clinical practice is challenged by potential off-target side effects and lack of control over the location and temporal extent of beige adipocyte biogenesis. Here, we demonstrate an alternative approach to stimulate browning using nanoparticles (NPs) composed of FDA-approved poly(lactide-co-glycolide) that enable sustained local release of a Notch inhibitor (dibenzazepine, DBZ). These DBZ-loaded NPs support rapid cellular internalization and inhibit Notch signaling in adipocytes. Importantly, focal injection of these NPs into the inguinal white adipose tissue depots of diet-induced obese mice results in localized NP retention and browning of adipocytes, consequently improving the glucose homeostasis and attenuating body-weight gain of the treated mice. These findings offer new avenues to develop a potential therapeutic strategy for clinical treatment of obesity and its associated metabolic syndrome.