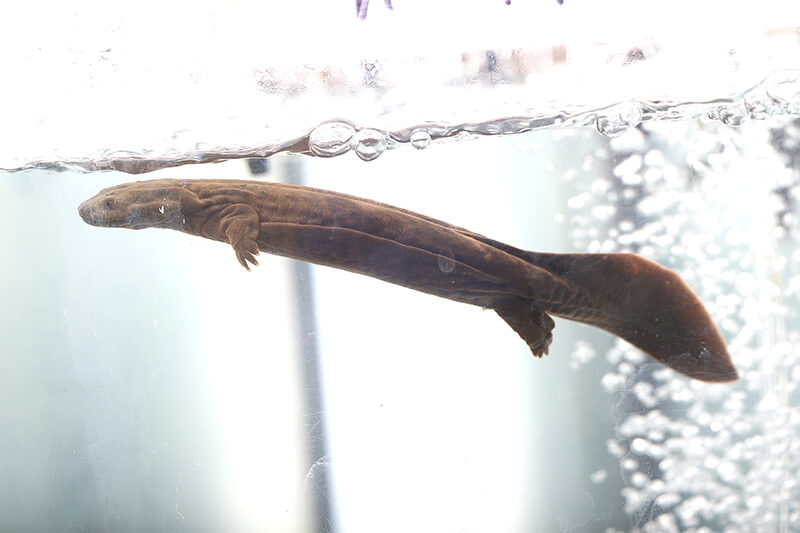 WEST LAFAYETTE, Ind. – When people think of endangered species, the giant panda or mountain gorilla often come to mind. But endangered species are everywhere, including Indiana. Purdue University extensively studies and partakes in the captive rearing of one of these species: the Eastern hellbender, North America’s largest salamander. Now, through collaborative efforts with institutions and zoos throughout Indiana, one zoo is undertaking captive breeding.

Rod Williams, an associate professor of wildlife science at Purdue, helped develop the Help the Hellbender campaign at Purdue with the help of Linda Prokopy, a professor of natural resources social science.

Help the Hellbender is a broad-scale initiative that includes The Nature Conservancy, zoos, and the Indiana Department of Natural Resources. “We focus on research, environmental education, conservation, and management of the hellbender,” Williams said.

The species has been declining for years due to habitat degradation and destruction, but captive rearing efforts across the country are helping hellbenders slowly bounce back. Recently, Evansville’s Mesker Park Zoo constructed an artificial stream in attempt to promote captive breeding efforts. If they are successful, it will mark the first time that Eastern hellbenders are bred in captivity. 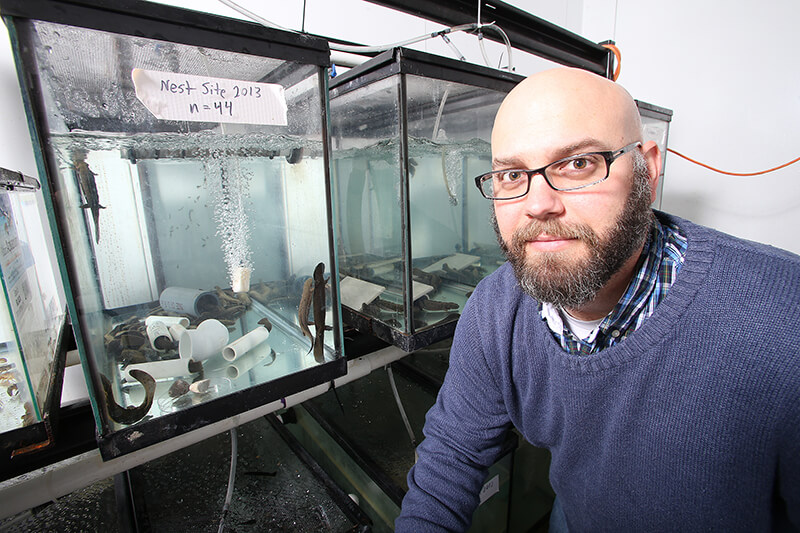 “This is a unique opportunity for Mesker Park Zoo,” said Susan Lindsey, the zoo’s animal curator. “We didn’t want to just exhibit the animals, we wanted to help with the efforts to restore them. St. Louis Zoo had Ozark hellbenders breed successfully. We hope to do the same with Eastern hellbenders.”

Eastern hellbenders are aquatic salamanders that can reach up to 2 feet in length and live more than 30 years. The giant salamanders can be found throughout the eastern United States. In Indiana, they can only be found in the Blue River, located in the southern part of the state. Hellbenders are important indicator species; they can only survive in cleaner waters, so they serve as an indicator of stream health.

The artificial stream built for the hellbenders is not just a pool of water. Mesker Park Zoo has taken into account everything a wild hellbender would experience, including temperature, currents, daylight and even weather. They have installed chillers to keep the water at temperatures similar to a flowing river, sprinklers to mimic rainfall and pumps to circulate the water, creating a current.

“Hopefully eggs will be laid [in the raceway],” Lindsey said. “It would be great for people to see the eggs and their maturation leading up to their release – a full circle.”

Mesker Park Zoo isn’t the only zoo involved with the captive rearing of hellbenders. Three other Indiana zoos are involved with the effort, in addition to several zoos and universities across the United States.

“Each zoo has something unique to offer the initiative,” Williams said. “Mesker Park Zoo is providing a breeding facility and display. Columbian Park Zoo is focused on delivering a message locally close to Purdue. Fort Wayne Children’s Zoo has the vets and capacity for propagation; they have about 60 hellbenders. The Indianapolis Zoo came on board and is just getting started.”

“Columbian Park Zoo’s goals with hellbender conservation are to continue the partnership with Purdue, head-start the animals for release back into the wild, and increase public awareness and perception of the Eastern hellbender,” said assistant zoo director Noah Shields.

Mesker Park Zoo also will be releasing their hellbenders into the wild, but the zoo has the added benefit of having the hellbenders’ natural habitat right in its backyard. The  hellbenders will be raised and released near the same area.

“The ultimate goal for hellbender conservation is to restore hellbenders in all their historical locations,” Williams said. “They’re important indicators of water quality, so they are equivalent to the old saying ‘canaries in the coal mine.’ We refer to them as the salamanders of the stream.”

If captive breeding efforts are successful, the project will represent one more step forward to better water quality and endangered species conservation.

“We’re honored to be part of this,” Lindsey said. “We’re excited to get to the point where hellbenders are recovered in Indiana and beyond.