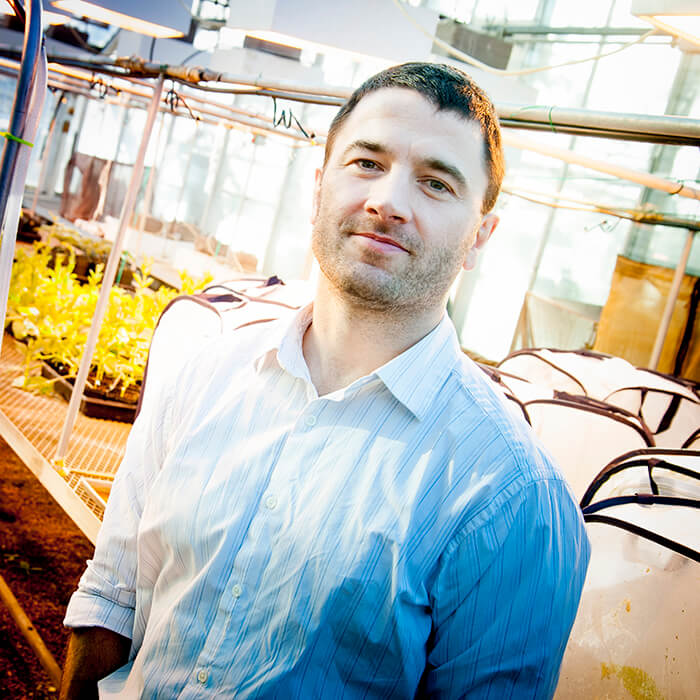 WEST LAFAYETTE, Ind. - Cover crops have been promoted for their abilities to reduce erosion and retain or enhance soil nutrients. Now there is evidence that they can significantly reduce weed seeds from entering the soil seed bank.

Crops such as red clover, planted after a main crop’s harvest, often are used to provide cover for insects such as ground beetles that feed on weed seed scattered along the soil surface. Beetles remove the seeds before they are tilled under and become part of the field’s long-term seed bank. Rodents are also important consumers of weed seeds and, like beetles, tend to prefer foraging under the shelter provided by cover.

As a result, in fields planted with cover crops, three to four times more weed seed is eliminated from the combination of beetles and rodents, according to recent research.

While that result wasn’t unexpected, Ian Kaplan, a Purdue University associate professor of entomology, and Carmen Blubaugh, who earned her doctorate at Purdue and is now a postdoctoral research associate at Washington State University, used field experiments to learn a little about how habitat and fear might cause ripples along the food chain and affect seed predation.

Beyond eating weed seeds, rodents also attack seed-feeding beetles, making it a challenge to predict seed consumption rates where both mice and beetles coexist. Each face numerous threats that change their approaches to finding food. On dark nights, for example, rodents might roam open fields. But under a moonlit sky, they are vulnerable to nocturnal predators.

“We know moonlight has this predictable effect on small mammal behavior,” said Blubaugh, whose findings were published in the journal Oecologia. “When the moon is full, small mammals hide under the protection of cover. It helps them avoid predators that fly at night.”

In field experiments, they artificially manipulated “moonlight” in fields using lanterns to simulate a full moon. They indeed found fewer beetles under the illuminated cover crops, but instead of reducing the rate of weed seed consumption, the light treatments had no effect.

In lab tests, exposure to a rodent decreased the movement of beetles, likely their way of becoming less noticeable to the predators. But surprisingly, the beetles ate 50 percent more seeds, despite the risk of being eaten themselves.

“Beetles reduce their movement, but it might just mean that they hunker down on a pile of seeds and use that as a resource instead of hunting around for higher quality food,” Blubaugh said.

Blubaugh expects to continue studying the interactions among animals and insects to understand how they’re affected by fear and risk. She said a study of animal feces could inform how diets change in response to fluctuating risk.

The National Science Foundation and the U.S. Department of Agriculture’s National Institute of Food and Agriculture funded Kaplan and Blubaugh’s research.

Non-consumptive effects (NCEs) of predators are ubiquitous in food webs with well-detailed impacts on trophic cascades over multiple levels. However, integrating NCEs with other predator–mediated interactions, like intraguild predation, as well as context-specific habitat factors that shape top–down pressure, remains a challenge. Focusing on two common seed predators, mice (Peromyscus spp.) and carabid beetles (Coleoptera: Carabidae), we quantify trophic and behavioral consequences of predation risk and availability of refuge vegetation on both intraguild predators (mice) and intraguild prey (beetles). In a 2-year field experiment, we manipulated refuge habitat (red clover), small mammal access, and moonlight, which small mammals use as an indirect cue of predation risk. We found that avoidance of predation risk by mice in simulated moonlight reduced carabid activity density in vegetation by up to 50% compared to exposed habitat, but had no cascading effects on seed predation. We linked patterns observed in the field with behavioral mechanisms by observing beetle foraging activity, and found that exposure to both indirect and direct vertebrate predator cues reduced movement by 50%, consistent with predator–mediated activity reductions observed in the field. However, predation risk increased carabid seed consumption by 43%. Thus, weak effects of predation risk on seed removal in the field may be explained by overcompensatory seed feeding by beetles. This work demonstrates that predators elicit responses that cascade over multiple trophic levels, triggering behavioral changes in species lower on the food chain. These behavior-mediated cascades are controlled by their spatiotemporal context and have important downstream impacts on predator–prey dynamics.