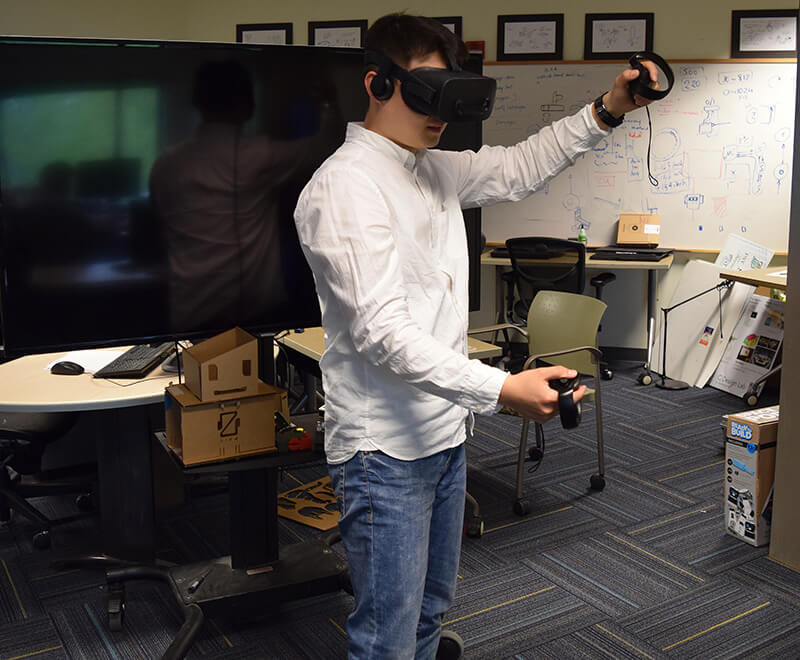 Arm fatigue accumulates during a prolonged use of mid-air interfaces such as Oculus Rift. (Purdue University Photo/Brian Huchel)

WEST LAFAYETTE, Ind. — Researchers at Purdue University’s C Design Lab are studying arm and muscle fatigue connected to advancements in the use of hand gestures for mid-air computer interaction.

Karthik Ramani, the Donald W. Feddersen Professor in the School of Mechanical Engineering, is part of a study to evaluate and quantify arm fatigue in a simplified framework compared to current methods.

“In previous years, all the computer interaction technologies we had included something to support our limbs,” Ramani said. “But with newer forms of interaction, there is no support. The question now is what the guidelines are to design new interfaces and interaction for such settings.”

Technology has created mid-air interaction advancements in gaming, augmented and virtual reality applications and the use of mobile technologies using hands.

Results of the study will be presented Tuesday (May 9) at the Association for Computing Machinery Conference on Human Factors in Computing Systems in Denver. The event is one in a series of prestigious academic conferences in the field of human–computer interaction and one of the top conferences in computer science. It is hosted by ACM SIGCHI, the special interest group on computer–human interaction.

The study looked at the issue of human-computer interaction in two ways: Determining an individual’s arm strength and estimating cumulative subjective fatigue levels.

Ramani said current methods to examine strength are expensive and invasive and can leave out considerations for rest. To simplify the issue, the study opted for inexpensive depth cameras, which are used in popular home video game systems to sense body motion and hand motion.

According to Jang, 24 participants were asked to grasp a dumbbell (5-pound for 20 males and 3-pound for four females) and hold their arm out horizontally for as long as they could. The camera sensors measured what their hands and arms are doing.

Using shoulder torque and endurance time, researchers were able to determine arm strength with an average error of 8.4 percent, slightly higher than the 6.2 percent recorded by current, higher-priced methods. That difference is negligible given the latter’s accessibility and price tags of tens of thousands of dollars.

“With a simple depth camera and a dumbbell, we are able to do as good measurements as the other methods,” Ramani said.

In determining cumulative subjective fatigue, the study once again looked to improve current methods, which usually register an error rate of 35 percent.

Jang said 24 subjects were shown targets on screen and asked to touch the targets as many times as possible with good accuracy for four one-minute segments, with random rest durations of 5-20 seconds between each segment. The screens were placed at shoulder- and waist-level heights for the experiment, and depth cameras were used to examine the body’s skeleton.

In the end, Ramani said the study was able to estimate the cumulating subjective fatigue at an improved 15 percent error rate over traditional methods.

According to Stuerzlinger, an expert on 3-D user interfaces, the “gorilla arm syndrome” is already an issue with vertical touchscreens, making it a problem even beyond augmented and virtual reality systems.

“The results of our work enable user interface designers to predict how fatiguing a specific user interface is, even before a new design is built/realized, which enables the designers to make better decisions around new, proposed 3-D user interfaces,” he said. “This, in turn, will accelerate and lead to the development of better user interface solutions for virtual and augmented reality systems.”

For Ambike, the study’s method of measuring strength and fatigue could have far-reaching implications for the aging population.

“Our inexpensive methods will potentially translate to establishing the relation between fatigue/strength and health, as well as into continuous monitoring of fatigue levels in at-risk populations,” he said. “In this way, this technology promises to have a significant clinical impact.”

The C Design lab will present two other papers at the conference: One in computational fabrication (https://engineering.purdue.edu/cdesign/wp/wirefab-mix-dimension-modeling-and-fabrication-for-3d-mesh-models/) and a second in collaborative design ideation (https://engineering.purdue.edu/cdesign/wp/co-3deator-a-team-first-collaborative-3d-design-ideation-tool/).

Note to Journalists: Purdue researchers are scheduled to present “Modeling Cumulative Arm Fatigue in Mid-Air Interaction based on Perceived Exertion and Kinetics of Arm Motion” at 4:30 p.m. PST Tuesday (May 9) at the Association for Computing Machinery’s Human Factors in Computing Systems Conference in Denver, Colorado.

Quantifying cumulative arm muscle fatigue is a critical factor in understanding, evaluating, and optimizing user experience during prolonged mid-air interaction. A reasonably accurate estimation of fatigue requires an estimate of an individual’s strength. However, there is no easy-to-access method to measure individual strength to accommodate inter-individual differences. Furthermore, fatigue is influenced by both psychological and physiological factors, but no current HCI model provides good estimates of cumulative subjective fatigue. We present a new, simple method to estimate the maximum shoulder torque through a mid-air pointing task, which agrees with direct strength measurements. We then introduce a cumulative fatigue model informed by subjective and biomechanical measures. We evaluate the performance of the model in estimating cumulative subjective fatigue in mid-air interaction by performing multiple cross-validations and a comparison with an existing fatigue metric. Finally, we discuss the potential of our approach for real-time evaluation of subjective fatigue as well as future challenges.

This work was partly supported by the National Science Foundation under Award 1538868 CMMI.