Research leader tapped as Purdue dean for College of Engineering 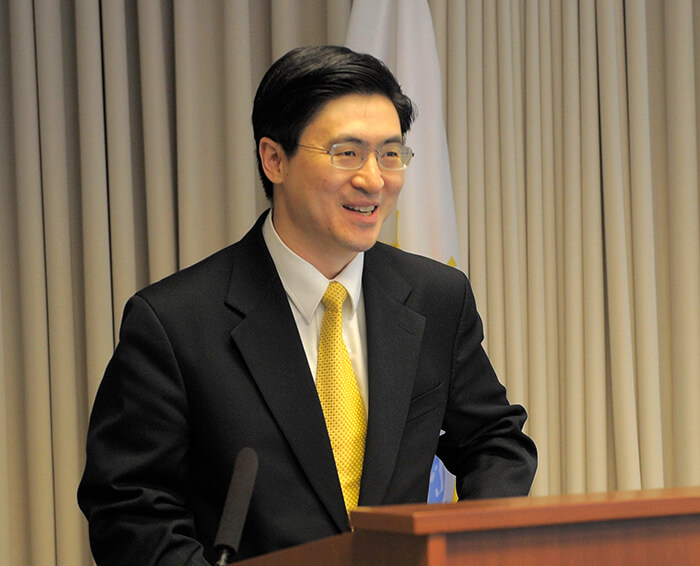 WEST LAFAYETTE, Ind. — Purdue University has chosen an award-winning researcher in networks engineering and a leader in educational innovations from Princeton University as the next dean of the College of Engineering.

Mung Chiang, the Arthur LeGrand Doty Professor of Electrical Engineering, was selected from a group of three finalists following a national search. He will assume the position of John A. Edwardson Dean of Engineering on July 1.

“Purdue has recruited one of the genuine superstars of American engineering and higher education,” said Purdue President Mitch Daniels. “Dr. Chiang’s personal research achievements, entrepreneurial success record, and international reputation, combined with our recent major investments in our College of Engineering, truly positions us for world leadership. I can’t overstate how thrilled all Boilermakers should be at this news.”

Chiang, in 2013, received the prestigious National Science Foundation Alan T. Waterman Award, among the highest honors given to young U.S. scientists and engineers, and he will become the only researcher at Purdue to hold that distinction. He also has received a Guggenheim Fellowship, the Institute of Electrical and Electronics Engineers Kiyo Tomiyasu Award, the American Society for Engineering Education Frederick E. Terman Award, a Presidential Early Career Award for Scientists and Engineers, and the Distinguished Teaching Award from Princeton School of Engineering. Chiang currently serves as director of Keller Center for Innovations in Engineering Education at Princeton and the inaugural chairman of Princeton Entrepreneurship Council. He founded the Princeton EDGE Lab in 2009, which bridges the theory-practice gap in edge networking research by spanning from proofs to prototypes.

His core areas of research include computing and networking, and information sciences and systems.

“Purdue’s College of Engineering is one of the strongest and one of the largest in the country,” Chiang said. “Its recent growth is remarkable, and its future even brighter. I am humbled by the honor to serve this outstanding college, one that is part of a public university under the visionary leadership of President Daniels. I am eager to start by listening carefully to the faculty, students, staff and alumni of Purdue Engineering.”

Chiang will succeed Leah Jamieson, who is stepping down as Purdue’s engineering dean after 11 years. She will transition to full-time faculty duties in the School of Electrical and Computer Engineering.

Jamieson announced in October she would step down, and Provost Deba Dutta appointed a 15-person search committee, led by R. Byron Pipes, the John L. Bray Distinguished Professor of Engineering and executive director of the Composites Manufacturing and Simulation Center, and Andrew Weiner, the Scifres Family Distinguished Professor of Electrical and Computer Engineering.

The search began in November with town hall meetings to solicit input from faculty and staff. Chiang and two other finalists visited the campus in late March and early April.

“I cannot say enough about the outstanding work of the search committee throughout this entire process,” Dutta said. “From the beginning, they conducted a search of extreme integrity, they were inclusive and they sought the vital input of Purdue engineering faculty and staff. What emerged was a field of excellent finalists and one exceptional new dean for Purdue Engineering.”

Vincent Poor, the Michael Henry Strater University Professor of Electrical Engineering and the previous dean of engineering at Princeton, said Chiang “excels at all he does,” ranging from scholar and teacher to leader and entrepreneur.

“Notably, he has been highly innovative in all of these spheres at Princeton, creating a wealth of opportunities for students, faculty, alumni and industry practitioners,” Poor said. “I am confident that his unique combination of skills, his clarity of vision and his ability to work with people from across the academic enterprise will make him an outstanding dean at Purdue.”

Reed Hundt, former chairman of the Federal Communications Commission, “Purdue has made an outstanding choice. Mung Chiang is highly regarded in the wireless communications research and policy domains. His entrepreneurial mindset will help shape new frontiers in engineering education and research.”

As a Princeton faculty member, Chiang’s Alan T. Waterman Award was based on his work on networking. His book, “The Power of Networks,” was published last year, and his textbook, “Networked Life,” and open online course have reached 250,000 students globally.

He co-founded startups in mobile networks, the Internet of Things and big-data areas, as well as the global nonprofit Open Fog Consortium in December 2015.

About the College of Engineering