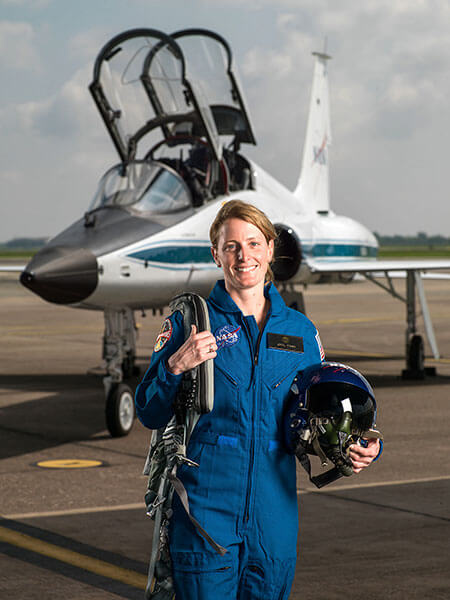 WEST LAFAYETTE, Ind. — Purdue’s “Cradle of Astronauts” added another name to its list with NASA’s announcement of the 2017 Astronaut Candidate Class.

Loral O’Hara of Sugar Land, Texas, and a 2009 Purdue graduate, was one of 12 people announced during ceremonies Wednesday (June 7) afternoon at Johnson Space Center in Houston.

O’Hara earned her master’s degree in aeronautics and astronautics from Purdue’s College of Engineering. She currently serves as a research engineer at Woods Hole (Massachusetts) Oceanographic Institute, where she designs, builds, tests and operates underwater vehicles focused on scientific research and exploration.

O’Hara is one of five women in the 2017 astronaut class and the third Purdue alumna to earn the honor, following Janice E. Voss and Mary Ellen Weber.

Twenty-four Purdue alumni have been chosen as astronauts by NASA.

As a student at Purdue, O’Hara said she loved spaceflight for as long as she could remember. She enjoyed working with, among others, William Anderson, a professor in aeronautics and astronautics at that time, who taught her how to be a good researcher.

She also was part of the first all-female team in the rocket propulsion facilities at Purdue’s Maurice Zucrow Laboratory.

O’Hara will report for duty in August and undergo training for the next two years. Following training, she will be assigned technical duties in the Astronaut Office while she awaits a flight assignment.

Purdue alum and current NASA astronaut Scott Tingle was among those to welcome the 2017 class in a taped presentation during the NASA ceremonies.