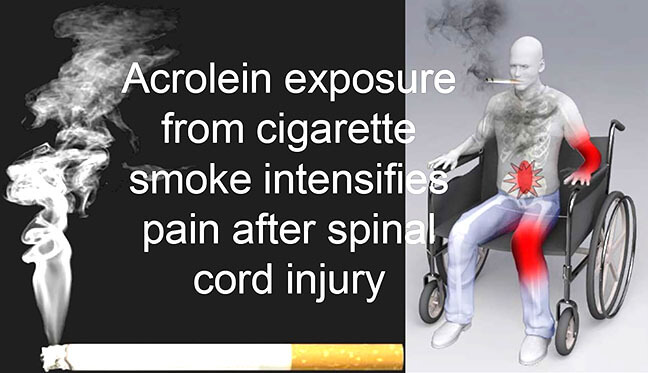 WEST LAFAYETTE, Ind. – Researchers have identified a key component in cigarette smoke that worsens pain in people with spinal cord injury, suggesting that a critical element within tobacco is responsible for such pain-inducing effects.

“Findings support anecdotal information suggesting that smoking increases pain in patients with spinal cord injuries,” said Riyi Shi (pronounced Ree Shee), a professor of neuroscience and biomedical engineering in Purdue University's Department of Basic Medical Sciences, College of Veterinary Medicine and Weldon School of Biomedical Engineering. “This neuropathic pain could be felt in the leg and upper extremities, or in any part of the body.”

A toxin from cigarette smoke has been shown to cause pain in animals with spinal cord injuries. The same toxin is known to activate pain sensors in nerve fibers.

The findings are detailed in a research paper appearing on Aug. 15 in the Journal of Neurological Sciences. The paper, published online May 22, was co-authored by Shi and graduate students Breanne Butler and Glen Acosta.

“Previously, it was reported that people with spinal cord injury-induced chronic neuropathic pain have experienced heightened pain sensitivity when smoking tobacco cigarettes, and less pain following the termination of smoking,” Shi said. “However, the molecular mechanisms of smoke-induced hypersensitivity are not yet clear. We show in the current study not only that the inhalation of cigarette smoke can worsen the pain, but inhaling acrolein alone, apart from cigarette smoke, at a concentration similar to that emitted from cigarettes, can produce significant increases in pain-related behavior after spinal cord injury as well. Furthermore, the intensified pain behavior due to acrolein inhalation was reduced when an acrolein scavenger, phenelzine, was administered to the animals during acrolein exposure.”

The study could open the door to a variety of possible preventive or therapeutic approaches to mitigate pain affecting the quality of life in spinal cord injury victims.

One of the principal impacts of the discovery is the possibility of reducing pain by using acrolein-scavenging drugs such as phenelzine, an anti-depressant approved by the U.S. Food and Drug Administration. Other potential FDA-approved anti-acrolein drugs including hydralazine, a medication for hypertension, and dimercarprol, an acute heavy metal poisoning treatment, have been tested and shown to be effective acrolein scavengers in Shi’s lab. The drugs are thought to mitigate pain in active smokers, but also among those with pain caused by second-hand smoke for people with spinal cord injuries.

Acrolein also is produced by the body in response to spinal cord injury, and this natural source of the neurotoxin has been found to increase pain. However, the new research findings are the first showing that both acrolein introduced from an external source and cigarette smoke itself increases pain. A potential mechanism is that acrolein may increase pain by activating the TRPA1 receptors after spinal cord injury, as shown in some of Shi’s previous work.

“The pain caused by cigarettes is noticeably more severe than acrolein alone, so there could be other compounds in cigarette smoke that also play a role,” he said.

The study was funded by the National Institutes of Health and the Indiana State Department of Health.

Acrolein, an α,β-unsaturated aldehyde associated with oxidative stress, is also a major toxic component of tobacco cigarette smoke, which has been reported in the clinic to coincide with the exacerbation of neuropathic pain after SCI. Previous reports have shown that acrolein involvement in spinal cord injury (SCI) is crucial to the development and persistence of neuropathic pain. Through the activation and upregulation of the transient receptor protein ankyrin-1 (TRPA1) cation channel, acrolein is capable of sensitizing the central nervous system in the acute and chronic stages of SCI. Here, we report that the acute or delayed nasal exposure of acrolein, apart from cigarette smoke but at concentrations similar to that found in cigarette smoke, resulted in increased neuropathic pain behaviors in a rat model of contusion SCI. We also found that this hyperalgesia occurred concurrently with an augmentation in systemic acrolein, detected by an acrolein-glutathione metabolite in the urine. The application of an acrolein scavenger, phenelzine, was shown to reduce the hyperalgesic effect of acrolein inhalation. The previously determined ability of acrolein to bind to and activate the TRPA1 channel and elicit algesic responses may be a mechanism of the phenomenon seen in this study. Upon the exposure to actual cigarette smoke after SCI, intensified neuropathic pain behaviors were also observed and persisted for at least 1 week after the cessation of the exposure period. Taken together, these results indicate that cigarette smoke, through mechanisms involving acrolein, poses a threat to the vulnerable CNS after SCI and can contribute to neuropathic pain. This investigation also provides further evidence for the potential utility of acrolein scavengers as a therapeutic strategy in SCI-resultant neuropathic pain.