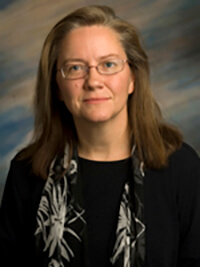 WEST LAFAYETTE, Ind. — Jean A. Chmielewski, the Alice Watson Kramer Distinguished Professor of Chemistry and professor of biomedical engineering, has been chosen as the 2017 Herbert Newby McCoy Award recipient. One of Purdue University's top three research honors, the McCoy Award is the most prestigious award the university bestows in the natural sciences.

Chmielewski is being recognized for her pioneering impact on the fields of chemical biology and drug discovery, in which she has designed novel chemical approaches and therapeutics to solve significant issues in human health and disease.

“Dr. Chmielewski is among the world’s leaders in exploiting peptides and peptidomimetics for therapeutic development,” said Suresh Garimella, Purdue's executive vice president for research and partnerships and the Goodson Distinguished Professor of Mechanical Engineering, in announcing the winner. “Her groundbreaking work in enabling effective antibiotics to more efficiently penetrate infected cells will facilitate better treatment of infections caused by pathogenic bacteria that have evolved to inhabit mammalian cells, such as M. tuberculosis.”

Chmielewski will deliver the McCoy Distinguished Lecture on Oct. 30 in Stewart Center's Fowler Hall. The 3:30 p.m. lecture is free and open to the public.

Chmielewski was among the vanguard of researchers who first developed agents to modulate protein-protein interactions, revealing the potential of these interactions to serve as therapeutic targets. Her work targeting drug efflux proteins, which pump therapeutic drugs out of their target cells, was recently applied to the blood-brain barrier to eliminate hidden HIV reservoirs in the brain.

Chmielewski’s pioneering work in nano-biotechnology produced the first example of controlled self-replicated peptides, which has great relevance to the origins of chemical replication on Earth, and her work on hierarchical assembly of peptide-based designer biomaterials has impactful implications for tissue engineering and regenerative medicine.

A graduate of Columbia University with a Ph.D. in chemistry, Chmielewski came to Purdue in 1990 as an assistant professor after postdoctoral fellowships at Rockefeller University and the University of California, Berkeley. She was named the Alice Watson Kramer Distinguished Professor of Chemistry in 2005, and in 2009, also became a professor in the Weldon School of Biomedical Engineering.

A fellow of the American Association for the Advancement of Science, Chmielewski has received the Arthur C. Cope Scholar and Edward Leete Awards from the American Chemical Society, and the Vincent du Vigneaud Award from the American Peptide Society, along with numerous teaching awards, including the Charles B. Murphy Award – Purdue’s highest teaching award. She has presented more than 170 invited lectures and authored or co-authored more than 130 publications.

The McCoy Award, established in 1964 by Ethel Terry McCoy in memory of her husband, a distinguished Purdue alumnus, is presented annually to a Purdue student or faculty member for outstanding contributions to the natural sciences. The award comes with a cash prize and small grant for Chmielewski's university scholarly activities. Winners of the McCoy Award are nominated by colleagues, recommended by a faculty committee and named by the university president.