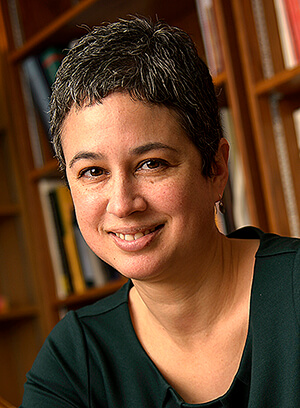 WEST LAFAYETTE, Ind. — Michele R. Buzon, a professor of anthropology in the College of Liberal Arts, has been chosen as the 2017 Research and Scholarship Distinction Award recipient. One of Purdue University's top three research honors, the Research and Scholarship Distinction Award is the most prestigious award the university bestows in the humanities and social sciences.

Buzon is being honored for her work in bioarchaeology.

“Dr. Buzon’s groundbreaking work in bioarchaeology has gained recognition in the United States and around the world. In combining state-of-the-art research methods with theoretical knowledge, she answers significant questions about ancient societies," said Suresh Garimella, Purdue's executive vice president for research and partnerships and the Goodson Distinguished Professor of Mechanical Engineering, in announcing the winner.  “Her field research and scholarship have advanced multiple disciplines, including archaeology, bioarchaeology and anthropology.”

Buzon will deliver the Research and Scholarship Distinction Distinguished Lecture on Oct. 30 in Stewart Center's Fowler Hall. The 10:30 a.m. lecture is free and open to the public.

Viewed as a leader in bioarchaeology and strontium isotope analysis, Buzon has earned an international reputation for her expertise and innovation, specifically for her research in the Nile Valley.

Buzon’s research examines processes of change and consequences of contact between people who inhabited the ancient Nile River Valley of Egypt and Nubia during the governmental alterations of the New Kingdom Egyptian occupation of Nubia (around 1530-1070 BCE) through the later Nubian Napatan rule of Egypt (around 750-650 BCE).

Buzon takes a multifaceted, contextual approach to her research. Using paleopathology – the study of ancient diseases – she provides a window into disease stress and nutritional deficiencies. With cranial measurements and non-metric traits, she explores biological relatedness between individuals and groups, and through strontium isotope analysis, she demonstrates the presence of first-generation immigrants at ancient sites.

Buzon’s work in Tombos, Sudan – which she has conducted in collaboration with Egyptologist and archaeologist Stuart Tyson Smith – has sought to understand how sociopolitical transitions affected peoples’ lives and roles. Over the last 17 years, Buzon has established that the interaction and collaboration of local Nubians and immigrant Egyptians at Tombos produced a healthy community during the New Kingdom Egyptian colonial period, which continued to thrive and influence the post-colonial and subsequent Napatan population.

A graduate of the University of California, Santa Barbara, with a Ph.D. in anthropology, Buzon completed a prestigious Killam Postdoctoral Fellowship at the University of Alberta before joining the Purdue faculty in 2007. In 2014, she was named a University Faculty Scholar, a program that provides additional university funding for outstanding faculty members at the West Lafayette campus who are on an accelerated path for academic distinction.

The Purdue Research and Scholarship Distinction Award, launched in 2013, recognizes university faculty whose recent contributions have made a major impact in humanities and social sciences. The award comes with a cash prize and a small grant for university scholarly activities. Winners of the Research and Scholarship Award are nominated by colleagues, recommended by a faculty committee and named by the university president.