WEST LAFAYETTE, Ind. – A new automated system detects cracks in the steel components of nuclear power plants and has been shown to be more accurate than other automated systems.

Other automatic crack detection algorithms under development often do not detect cracks in metallic surfaces because the cracks are usually small, have low contrast and are difficult to distinguish from welds, scratches and grind marks. The new system, called CRAQ, for crack recognition and quantification, overcomes this limitation by using an advanced algorithm and a powerful “machine learning” technique to detect cracks based on the changing texture surrounding cracks on steel surfaces.

Findings are detailed in a research paper published this week in Computer-Aided Civil and Infrastructure Engineering. The paper is available online at http://onlinelibrary.wiley.com/doi/10.1111/mice.12256/full.

The automated approach could help improve the state of the nation’s infrastructure, recently given an overall grade of D+ by the American Society of Civil Engineers, he said. 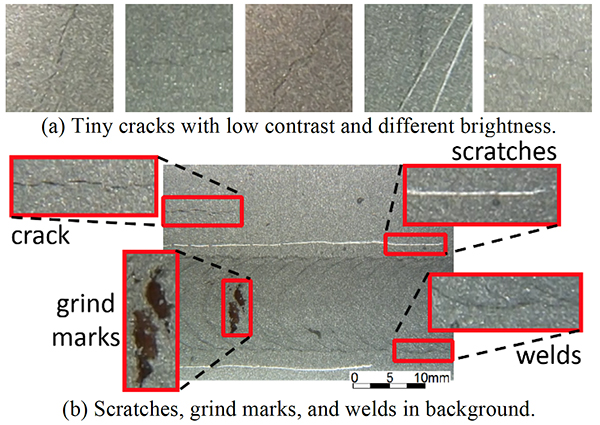 “One reason we have a grade of D+ for the infrastructure is insufficient inspection,” said Jahanshahi, director of Purdue’s Smart Informatix Laboratory. “So we want to have more frequent inspection using robotic systems to collect data.”

“Cracking is an important factor in aging degradation that may cause leaking and result in hazardous incidents,” Jahanshahi said. “For instance, the Millstone nuclear power station in Connecticut had an accident in 1996 that was caused by a leaking valve, and the accident cost $254 million. In 2010, the Vermont Yankee Nuclear Power Plant had an accident where deteriorating underground pipes leaked radioactive tritium into groundwater supplies, resulting in $700 million in damage.”

Complicating the inspection process is that nuclear reactors are submerged in water to maintain cooling.

“Consequently, direct manual inspection of reactor internals is not feasible due to high temperatures and radiation hazards,” Jahanshahi said. “So remotely recorded videos at the underwater reactor surface are used for inspection. However, recent testing has identiﬁed a need for increased reliability associated with identifying cracks from reviews of live and recorded data. The results indicate that this capability is degraded by human involvement in identifying cracks, even when identiﬁcation should be easy.”

“In contrast to other methods that only focus on detecting cracks in one image, we propose a method called Bayesian data fusion that tracks detected cracks in video frames and fuses the information obtained from multiple frames,” Jahanshahi said. “Moreover, we can ﬁlter out falsely detected cracks and increase the reliability and robustness of crack detection by using Bayesian decision theory,” which determines the probability that an object is a crack or a false alarm. 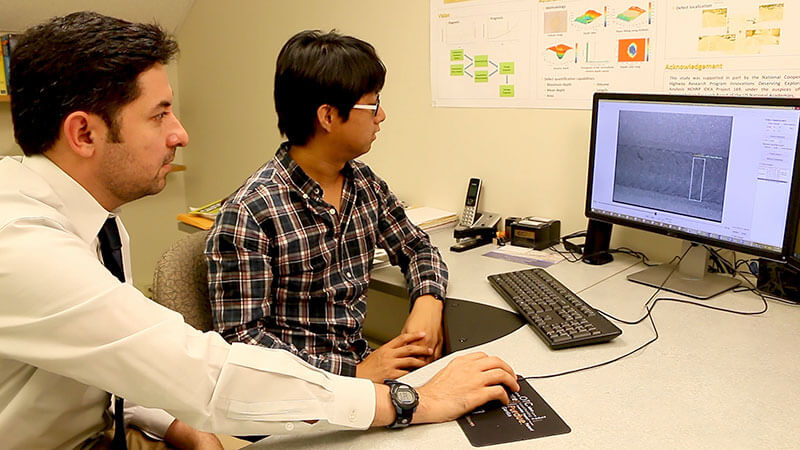 The system assigns “conﬁdence levels” automatically assessing whether the detected cracks are real, outlining the cracks with color-coded boxes that correspond to these confidence levels. For example, if the algorithm assigns a high confidence level to a crack, the box outline is red. The processing procedure takes about a minute.

“Then, a technician could do a manual inspection to confirm that there is a crack,” Jahanshahi said. A YouTube video is available at:  https://youtu.be/b87OgGBIR78.

“We are currently working on the second version of the software by developing deep learning algorithms to detect cracks for this application where we have significantly improved the performance of the system using Convolutional Neural Networks,” Jahanshahi said.

The researchers have filed a patent application through the Office of Technology Commercialization of the Purdue Research Foundation.

The research was supported in part under a contract with EPRI.

Note to Journalists: A copy of the research paper is available from Emil Venere, Purdue News Service, at 765-494-4709, venere@purdue.edu. A YouTube video is available https://youtu.be/b87OgGBIR78 and other video is accessible on Google Drive https://goo.gl/vezwH1. The video was produced by Erin Easterling, Purdue College of Engineering digital producer, 765-496-3388, Easterling@purdue.edu

Regular inspection of the components of nuclear power plants is important to improve their resilience. However, current inspection practices are time consuming, tedious, and subjective: they involve an operator manually locating cracks in metallic surfaces in the plant by watching videos. At the same time, prevalent automatic crack detection algorithms may not detect cracks in metallic surfaces because these are typically very small and have low contrast. Moreover, the existence of scratches, welds, and grind marks leads to a large number of false positives when state-of-the-art vision-based crack detection algorithms are used. In this study, a novel crack detection approach is proposed based on local binary patterns (LBP) to identify crack patches in each video frame. These patches are then grouped to form a bounding box for each crack. Furthermore, the bounding boxes corresponding to each crack in different video frames are tracked and aggregated using Bayesian decision theory to enhance the robustness and reliability of detection. The proposed approach is also optimized to reduce computation time. The performance of the proposed approach was assessed by using several inspection videos, and the results showed that it is accurate and robust in cases where state-of-the-art crack detection approaches fail.