WEST LAFAYETTE, Ind. — Researchers have introduced a new type of “super-resolution” microscopy and used it to discover the precise walking mechanism behind tiny structures made of DNA that could find biomedical and industrial applications.

Synthetic nanomotors and walkers are intricately designed systems that draw chemical energy from the environment and convert it into mechanical motion. However, because they are too small to be observed using conventional light microscopes, researchers have been unable to learn the precise steps involved in the walking mechanisms, knowledge essential to perfecting the technology.

“If you cannot resolve or monitor these walkers in action, you will be unable to understand their mechanical operation,” Choi said.

He led a Purdue team that has solved this problem by developing a super-resolution microscopy system designed to study the DNA walkers. The new findings appeared in the journal Science Advances on Jan. 20.

Researchers around the world are creating synthetic motors based on DNA and RNA, the genetic materials in cells that consist of a sequence of four chemical bases: adenine, guanine, cytosine and thymine. The designs are inspired by natural biological motors that have evolved to perform specific tasks critical to the function of cells.

The Purdue researchers have designed a DNA walking system consisting of an enzymatic core and two arms. The walker travels along a carbon-nanotube track “decorated” with strands of RNA. The enzymatic core cleaves off segments of these RNA strands as the walker continuously moves forward, binding to and harvesting energy from the RNA. The walker moves in a six-step cycle that repeats as long as there is RNA fuel. 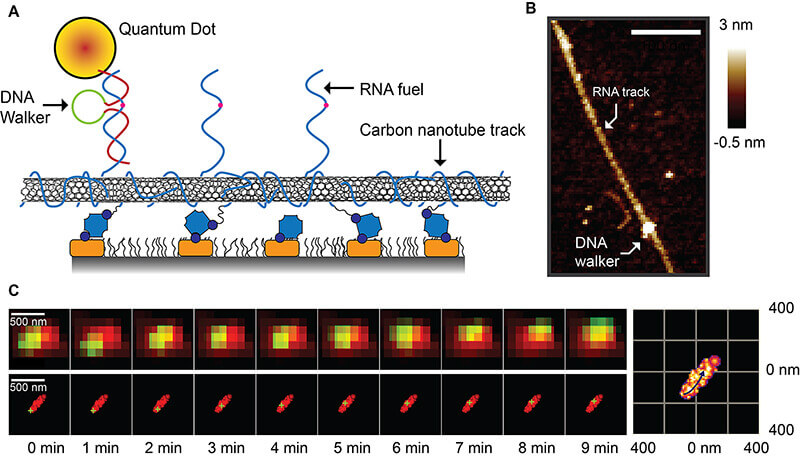 A new type of “super-resolution” microscopy has allowed researchers at Purdue University to determine the walking mechanism behind a DNA walking system that could find biomedical and industrial applications. The walker (A) travels along a carbon-nanotube track “decorated” with strands of RNA fuel, which it harvests for energy. An atomic force microscope image (B) shows the DNA walker attached to this track. At bottom are raw images taken with the super-resolution microscope showing the DNA walker (green) traveling along the track (red). (Purdue University image/Jing Pan) Download image

A fluorescent nanoparticle is attached to one arm of the DNA walker, causing it to glow when exposed to light in the visible part of the spectrum. The carbon-nanotube track also fluoresces when exposed to light in a portion of the near-infrared spectrum. Because the new super-resolution microscopy system operates in both the visible and near-infrared spectra, it is possible to track the walking mechanism.

The super-resolution technology allows researchers to resolve structural features far smaller than the wavelength of visible light, which is normally difficult using conventional microscopes because of the Abbe diffraction limit, established by physicist Ernst Abbe in 1873. The limit is about 250 nanometers, which is large compared to the tiny walkers, measuring about 5 nanometers long.

As the DNA walker is exposed to laser light, the nanoparticle and nanotube flash on and off randomly. These flashes are captured as numerous fluorescing dots in thousands of imaging frames. This collection of points is then used to reconstruct the precise motion of the walker, which moves in a six-step cycle that involves cleaving portions of the RNA strand and harvesting its energy before moving on to the next strand.

“So, if you can control these three steps within this walking cycle then you can really study and better control these walkers,” Choi said. “You can speed them up, you can make them stop and move in different directions.”

Whereas it previously would have taken 20 hours or longer to study a complete walking cycle, the new approach speeds the process to roughly one minute.

Future research will include work to develop the drug-release method. The research was funded by the Office of Naval Research and National Science Foundation.

Note to Journalists: A copy of the research paper is available from Emil Venere, 765-494-4709, venere@purdue.edu, in the Purdue University News Service. A video is available showing raw images of the DNA walker using a new type of super-resolution microscopy and an animated gif also is available.