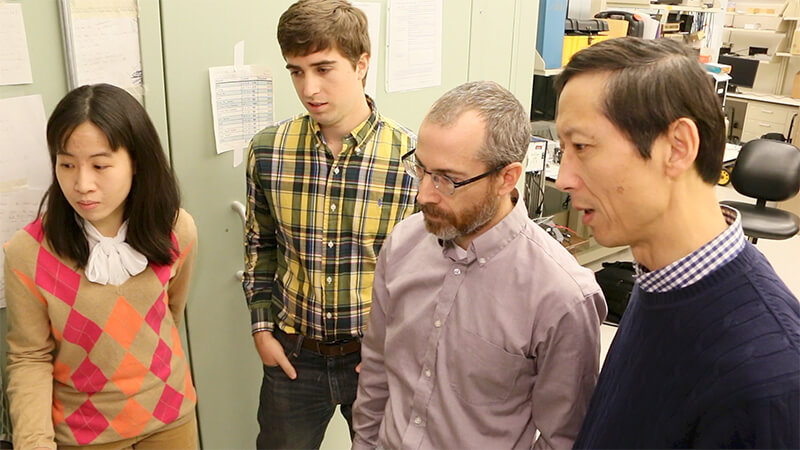 WEST LAFAYETTE, Ind. – New research findings suggest mild blast trauma suffered by military personnel affects portions of the auditory system that have not been extensively studied after injuries occur, and this impairment might be diagnosed using well-established testing methods.

“Advances in military protective equipment have increased the survival rate of personnel exposed to blasts, permitting exposure to higher intensity shock waves,” said Riyi Shi (pronounced Ree Shee), a professor of neuroscience and biomedical engineering in Purdue University's Department of Basic Medical Sciences, College of Veterinary Medicine and Weldon School of Biomedical Engineering. “Due to increased blast survivability, new organ systems have emerged as vulnerable to blast trauma, particularly the brain and auditory system. The vast majority of victims suffer what we refer to as mild blast injury, which is asymptomatic and difficult to detect, yet can produce lasting hearing impairment and may be associated with additional damage to the brain.”

For U.S. military veterans with service-connected disabilities, the two most prevalent conditions are tinnitus, or ringing in the ear, and hearing loss.

Researchers are using various tests based on the electrophysiology of the nervous system to record “auditory evoked potentials,” or small voltage changes at the surface of the skull that are picked up with electrodes.

“One of the promising aspects of this approach is that it’s non-invasive,” said Edward Bartlett, an associate professor in Purdue' Department of Biological Sciences and Weldon School of Biomedical Engineering. “We have demonstrated that auditory evoked potential recordings possess strong prospects for future diagnostic utility in identifying blast-injured individuals who are otherwise asymptomatic. While the techniques themselves are not new, their application to blast injury is.” 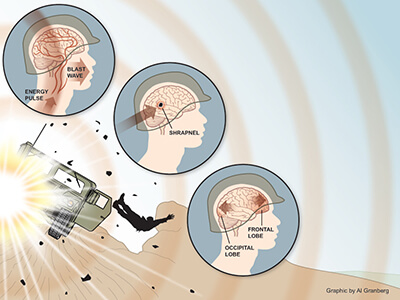 New findings appeared online this week in the Journal of Neurophysiology and will appear in a future print issue. A YouTube video is available at https://youtu.be/7Rcw7EjcGpg.

Shi and Bartlett are affiliated with the Purdue Institute for Integrative Neuroscience in the university’s Discovery Park.

The tests can be performed with non-invasive, portable equipment, representing a potentially practical diagnostic tool for military personnel after blast exposure in combat or training exercises, he said.

The researchers recorded data using an array of tests on laboratory rats. The results included findings that revealed “temporal processing impairments” suggestive of functional damage to regions of the brain called the auditory brainstem and inferior colliculus.

“We observed particular difficulty in the processing of temporally modulated sounds,” Bartlett said. “Sensitivity to temporal modulation, especially fast temporal modulation, is something we need in order to understand complex sounds like speech. Soldiers in military operations must be able to effectively deal with the complex audio on the battlefield, and if you even have mild auditory deficits your communication with team members or your ability to work within that environment could be compromised.”

The most common auditory evoked potential is recorded with a test called the auditory brainstem response, or ABR. It works by playing a brief sound, either a click or a brief tone, and recording the responses as a series of bumps on a graph, revealing details about the functioning of different parts of the auditory system.

Traditionally, hearing impairment from blasts has primarily been attributed to damage to the peripheral auditory system, which consists of the eardrum, middle ear and inner ear, including an organ called the cochlea. The cochlea houses microphone-like “inner hair cells” that produce electrical changes in response to sound vibrations. However, blast trauma also may damage the central auditory system, which extends from the auditory nerve to a region of the brain called the auditory cortex.

“Within the cochlea, it’s the connection between the inner hair cells and the auditory nerve fibers that we use to separate peripheral from central auditory systems,” Bartlett said.

In the new findings, researchers compared the effects of exposure to a loud noise accompanied by a blast shock wave to only the loud noise without the shock wave.

“It was found that a single blast exposure produced changes at all stages of the central auditory system for at least four weeks, whereas noise alone produced largely short-lived changes,” Shi said.

Moreover, impairment to the central auditory system may affect other parts of the brain responsible for complex behavior.

“Post-injury auditory processing deficits may represent a sensitive early marker for not only hearing impairment, but also global brain dysfunction,” he said. “The effects of brain injury on the central auditory system itself may contribute to an array of common behavioral complaints from veterans including learning, memory, communication and emotional issues. Beyond the auditory system, it is likely similar problems are occurring unnoticed in other brain regions, too.”

The paper was authored by doctoral student Nicholas Race, in Purdue’s Weldon School of Biomedical Engineering and the Indiana University School of Medicine; Purdue doctoral student Jesyin Lai, who is affiliated with the Purdue Interdisciplinary Life Science (PULSe) Program; Shi; and Bartlett.

Other research has shown that people exposed to blasts commonly have behavioral deficits, despite relatively small threshold shifts in hearing and little change in auditory brainstem response.

“This suggests that many of the military personnel exposed to blasts but deemed within the normal range by threshold testing may in fact have hearing impairment stemming from compromised processing or perception that could impact their performance in military operations and their return to civilian life,” Bartlett said. “Further research is needed, but measuring auditory changes and auditory deficits non-invasively could give us a window into general damage to the brain, based on these easy measurements that take about 30 minutes.”

The work was funded in part by the Indiana State Department of Health, National Institutes of Health, and the Indiana CTSI Collaboration in Biomedical Translational Research.

Note to Journalists: A copy of the research paper is available from Emil Venere, Purdue News Service, at 765-494-4709, venere@purdue.edu. A YouTube video is available at https://youtu.be/7Rcw7EjcGpg.  Other multimedia materials are available on Google Drive at https://goo.gl/tM6liW. The materials were prepared by Erin Easterling, digital producer for the Purdue College of Engineering, 765-496-3388, easterling@purdue.edu.

Hearing difficulties are the most commonly reported disabilities among Veterans. Blast exposures during explosive events likely play a role, given their propensity to directly damage both peripheral (PAS) and central (CAS) auditory system components. Post-blast PAS pathophysiology has been well-documented in both clinical case reports and laboratory investigations. In contrast, blast-induced CAS dysfunction remains under-studied, but has been hypothesized to contribute to an array of common Veteran behavioral complaints including learning, memory, communication, and emotional regulation. This investigation compared the effects of acute blast and non-blast acoustic impulse trauma in adult male Sprague-Dawley rats. An array of audiometric tests were utilized, including distortion product otoacoustic emissions (DPOAE), auditory brainstem responses (ABR), middle latency responses (MLR), and envelope following responses (EFR). Generally, more severe and persistent post-injury central auditory processing (CAP) deficits were observed in blast-exposed animals throughout the auditory neuraxis, spanning from the cochlea to the cortex. DPOAE and ABR results captured cochlear and auditory nerve/brainstem deficits, respectively. EFRs demonstrated temporal processing impairments suggestive of functional damage to regions in the auditory brainstem and the inferior colliculus. MLRs captured thalamocortical transmission and cortical activation impairments. Taken together, the results suggest blast-induced CAS dysfunction may play a complementary pathophysiologic role to maladaptive neuroplasticity of PAS origin. Even mild blasts can produce lasting hearing impairments that can be assessed with non-invasive electrophysiology, allowing these measurements to serve as simple, effective diagnostics.