WEST LAFAYETTE, Ind. – Purdue University researchers are developing software in a “haptic device” that could give people with visual impairments the ability to identify scientific images on a computer screen using their other senses.

Ting Zhang, a graduate student in the Purdue School of Industrial Engineering, is developing a system that involves a specially designed joystick attached to a computer. The joystick controls a cursor. When the cursor moves across an object on the screen, force feedback, vibrations and sound cues give the user information about the object’s size, shape, texture and color to help them identify the information displayed on a computer screen. A YouTube video is available at: https://youtu.be/teJXnc9lP1w

Working under the guidance of Brad Duerstock, associate professor of engineering practice in the School of Industrial Engineering and Weldon School of Biomedical Engineering, and Juan Wachs, associate professor in the School of Industrial Engineering, Zhang is trying to address the number of students with visual impairments who become involved in STEM studies. A 2014 National Science Foundation publication reports that no more than 1 percent of people who are visually impaired are involved in advanced science and engineering research and receive doctoral degrees. 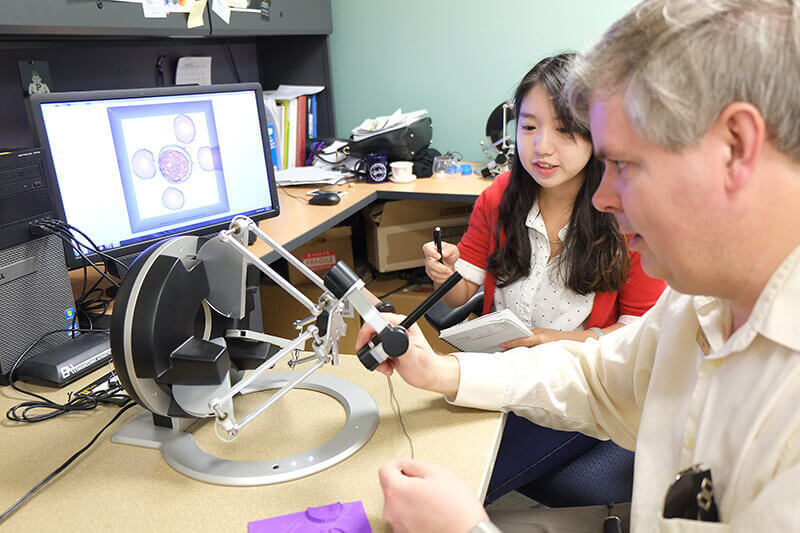 Ting Zhang (left), graduate student in the Purdue School of Industrial Engineering, assists David Schwarte, assistive technology specialist for Information Technology at Purdue (ITaP), as he tests a system being developed by Purdue researchers that could give people with visual impairments the ability to identify scientific images on a computer screen using their other senses. (Purdue Research Foundation photo/Curt Slyder) Download image

“How science is conducted and how findings are typically represented is usually quite visual, making it difficult for students with visual impairments,” Duerstock said.

“We’re hoping this technology can be used by schools in the future to assist students with visual impairments study science,” Zhang said

Conventional methods to assist such students include printing tactile representations of computerized images on expensive 3-D sheets of material.

“The method is much less expensive and allows a person to directly interface with a computerized image using a haptic device and other sensory interfaces,” Duerstock said.

Haptic devices are handheld devices that give users feedback with forces when used with a computer system, such as controllers common with modern home video game systems.

David Schwarte, assistive technology specialist for Information Technology at Purdue, or ITaP, has been testing the system with Duerstock and Wachs’ team. He has a visual impairment.
“I think this has a possibility of making things easier for people with a visual impairment,” Schwarte said. “The big advantage is that it’s electronic and more real time.”

In addition to students of all ages, Zhang believes the system would be useful for scientists with visual impairments.

“We think the technology could be extended to other users as well, such as people without disabilities needing to get details about objects that only exist in the virtual state,” Zhang said.

“New Scientist” published an article about the technology.

Duerstock and Wachs’ team has a working prototype of the system and plans to do field trials this summer. The team also is looking for collaborators and investors to expedite the commercialization of the technology.

Zhang also plans to create a startup company to market the technology.

The Purdue Office of Technology Commercialization operates one of the most comprehensive technology transfer programs among leading research universities in the U.S. Services provided by this office support the economic development initiatives of Purdue University and benefit the university's academic activities. The office is managed by the Purdue Research Foundation, which received the 2016 Innovation and Economic Prosperity Universities Award for Innovation from the Association of Public and Land-grant Universities.

Note to Journalists:  A YouTube video is available https://youtu.be/teJXnc9lP1w  and other video is accessible on Google Drive https://goo.gl/qUDZDu. The video was produced by Erin Easterling, Purdue College of Engineering digital producer, 765-496-3388, easterling@purdue.edu