Does Mars have rings? Not right now, but maybe one day 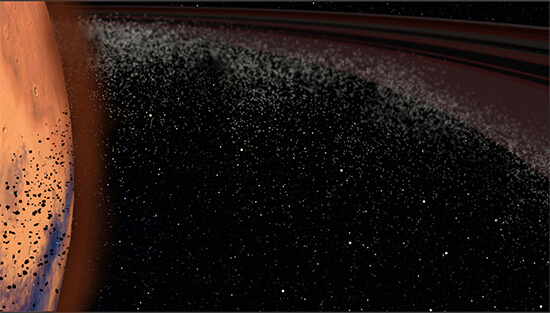 A new theory by Purdue University scientists says that the Martian moon Phobos might eventually break apart, forming a ring around the red planet. The NASA-funded scientists theorize that this ring formation has happened before, and that as the moons break apart some of the material falls to the surface, as shown in this illustration. (Illustration by Purdue University Envision Center) Download image

WEST LAFAYETTE, Ind. - As children, we learned about our solar system’s planets by certain characteristics — Jupiter is the largest, Saturn has rings, Mercury is closest to the sun. Mars is red, but it’s possible that one of our closest neighbors also had rings at one point and may have them again someday.

That’s the theory put forth by Purdue University scientists, whose findings were published in the journal Nature Geoscience. David Minton, assistant professor of Earth, atmospheric and planetary sciences, and Andrew Hesselbrock, a doctoral student in physics and astronomy, developed a model that suggests that debris that was pushed into space from an asteroid or other body slamming into Mars around 4.3 billion years ago and alternates between becoming a planetary ring and clumping up to form a moon.

A theory exists that Mars’ large North Polar Basin or Borealis Basin, which covers about 40 percent of the planet in its northern hemisphere, was created by that impact, sending debris into space.

“That large impact would have blasted enough material off the surface of Mars to form a ring,” Hesselbrock said. 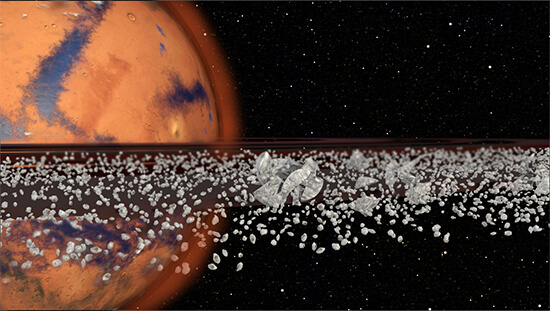 Phobos, a Martian moon, might eventually disintegrate and form a ring around the red planet, according to a new theory by Purdue University scientists. The NASA-funded research indicates that this process of moons breaking apart into rings and then reforming as moons may have happened several times over billions of years. (Image by Purdue University Envision Center) Download image

Hesselbrock and Minton’s model suggests that as the ring formed and the debris slowly moved away from the planet and spread out, it began to clump and eventually formed a moon. Over time, Mars’ gravitational pull would have pulled that moon toward the planet until it reached the Roche limit, the distance within which the planet’s tidal forces will break apart a celestial body that is held together only by gravity.

Phobos, one of Mars’ moons, is getting closer to the planet. According to the model, Phobos will break apart upon reaching the Roche limit and become a set of rings in roughly 70 million years. Depending on where the Roche limit is, Minton and Hesselbrock believe this cycle may have repeated between three and seven times over billions of years. Each time a moon broke apart and reformed from the resulting ring, its successor moon would be five times smaller than the last, according to the model, and debris would have rained down on the planet, possibly explaining enigmatic sedimentary deposits found near Mars’ equator.

“You could have had kilometer-thick piles of moon sediment raining down on Mars in the early parts of the planet’s history, and there are enigmatic sedimentary deposits on Mars with no explanation as to how they got there,” Minton said. “And now it’s possible to study that material.” 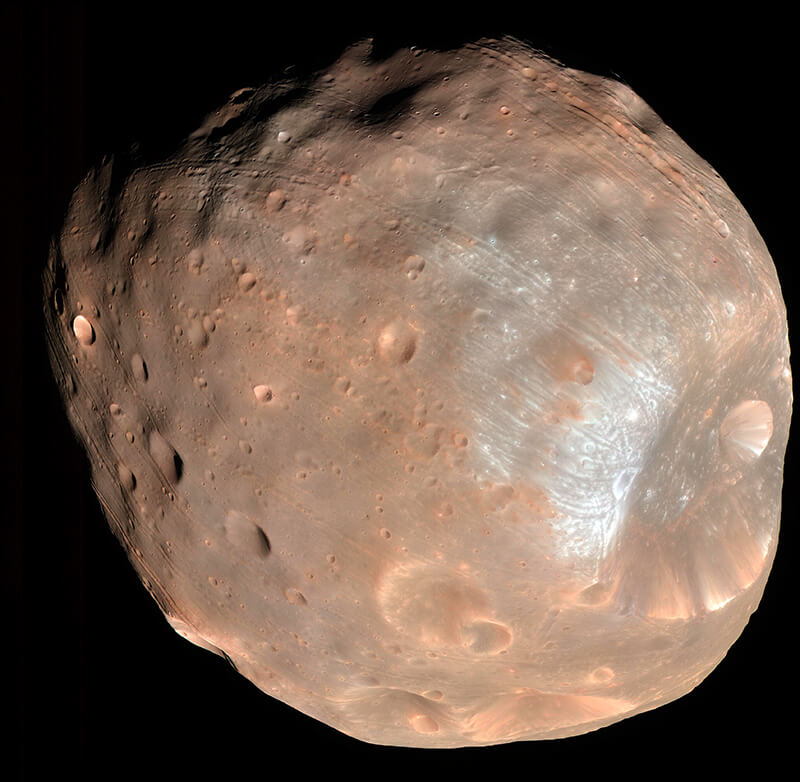 The Martian moon Phobos, seen here in a photo taken by NASA's Mars Reconnaissance Orbiter from 4,200 miles away, may eventually break up and form a ring, according to a new theory by scientists at Purdue University. (NASA photo) Download image

Other theories suggest that the impact with Mars that created the North Polar Basin led to the formation of Phobos 4.3 billion years ago, but Minton said it’s unlikely the moon could have lasted all that time. Also, Phobos would have had to form far from Mars and would have had to cross through the resonance of Deimos, the outer of Mars’ two moons. Resonance occurs when two moons exert gravitational influence on each other in a repeated periodic basis, as major moons of Jupiter do. By passing through its resonance, Phobos would have altered Deimos’ orbit. But Deimos’ orbit is within one degree of Mars' equator, suggesting it has had no effect on Phobos.

“Not much has happened to Deimos’ orbit since it formed,” Minton said. “Phobos passing through these resonances would have changed that.”

Richard Zurek of NASA's Jet Propulsion Laboratory, Pasadena, California, is the project scientist for NASA's Mars Reconnaissance Orbiter, whose gravity mapping provided support for the hypothesis that the northern lowlands were formed by a massive impact.

"This research highlights even more ways that major impacts can affect a planetary body," he said.

Minton and Hesselbrock will now focus their work on either the dynamics of the first set of rings that formed or the materials that have rained down on Mars from disintegration of moons.