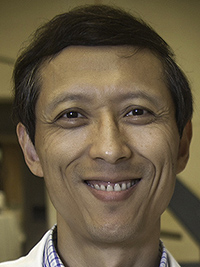 WEST LAFAYETTE, Ind. – Researchers have developed a urine test revealing the presence of a neurotoxin that likely worsens the severity and pain of spinal cord injuries, suggesting a new tool to treat the injuries.

The neurotoxin, called acrolein, is produced within the body after nerve cells are damaged, increasing pain and triggering a cascade of biochemical events thought to worsen the injury's severity. The new test detected the toxin's presence in dogs that had naturally sustained spinal cord injuries. The injuries were acute, meaning they were suffered within a few weeks of the study, when treatment to reduce acrolein might help prevent further damage.

The researchers studied the presence of a chemical compound called 3- hydroxypropyl mercapturic acid (3-HPMA), which is a metabolic product of acrolein.

"This has implications for a potential treatment to hinder further damage and reduce pain in people with spinal cord injuries," said Riyi Shi (pronounced Ree Shee), a professor of neuroscience and biomedical engineering in Purdue University's Department of Basic Medical Sciences, College of Veterinary Medicine and Weldon School of Biomedical Engineering. "Urine 3-HPMA could be used as a biomarker in future clinical trials to non-invasively measure the effect of therapeutic intervention by reducing acrolein after acute spinal cord injury."

Findings are detailed in a research paper published online in December in The Veterinary Journal.

The concentration of acrolein can be reduced using the drug hydralazine, which has been approved by the U.S. Food and Drug Administration for hypertension. The drug has been shown to reduce acrolein and pain following spinal cord injury in laboratory rats and mice.

In the new study, urine was studied from 10 dogs with acute spinal cord injuries, and 10 without injuries as a control. Findings showed the median urine 3-HPMA concentration was significantly higher in dogs with the injuries compared to the control dogs.

"Urine 3-HPMA is the first assay to indirectly assess acrolein concentration by measuring a metabolite of acrolein in dogs," Shi said.

While previous research focused on rats and mice, progressing to dogs takes the research a step closer to research with humans. At the same time, because the dogs suffered their injuries naturally and they are much closer to humans in size, they represent a truer comparison to people with spinal cord injuries, Shi said.

Together, these factors increase the likelihood of translating the findings to eventual application to humans, he said.

"It's important to acknowledge the critical role played by Purdue's College of Veterinary Medicine," Shi said. "Because we have an excellent veterinary hospital, we have ready access to facilities and expertise not available to most research institutions."

Ideally, the monitoring approach might be used in personalized medicine to reduce side effects by precisely tailoring drug dosage to individual patients based on the concentration of acrolein.

The study, funded by the National Institutes of Health, was approved by the Purdue University Animal Care and Use Committee. The research dovetails with the goals of a recently formed Purdue Institute for Integrative Neuroscience, at the university's Discovery Park. The institute spans 25 departments and includes around 100 faculty engaged in neuroscience-related research.

Future research may include work to treat dogs with spinal cord injuries with hydralazine or other drugs that reduce the concentration of acrolein.

Note to Journalists: A copy of the research paper is available from Emil Venere, Purdue News Service, at 765-494-4709, venere@purdue.edu.

The objective of this study was to investigate urine 3-hydroxypropyl mercapturic acid (3-HPMA), a metabolite of acrolein, as a novel biomarker in acute spinal cord injury (ASCI) due to intervertebral disc herniation in dogs. Urine from 10 client-owned dogs with ASCI collected at presentation and 10 control dogs was analyzed for 3-HPMA. The median urine 3-HPMA of ASCI dogs was significantly higher than that from control dogs. Further, urinary 3-HPMA of intact dogs was statistically higher than neutered dogs. Higher urine 3-HPMA in dogs after ASCI supports an important role of acrolein, a cytotoxic byproduct of lipid peroxidation, in canine ASCI. Urine 3-HPMA could be used as a biomarker in future clinical trials to measure the effect of therapeutic intervention of reducing acrolein after ASCI.