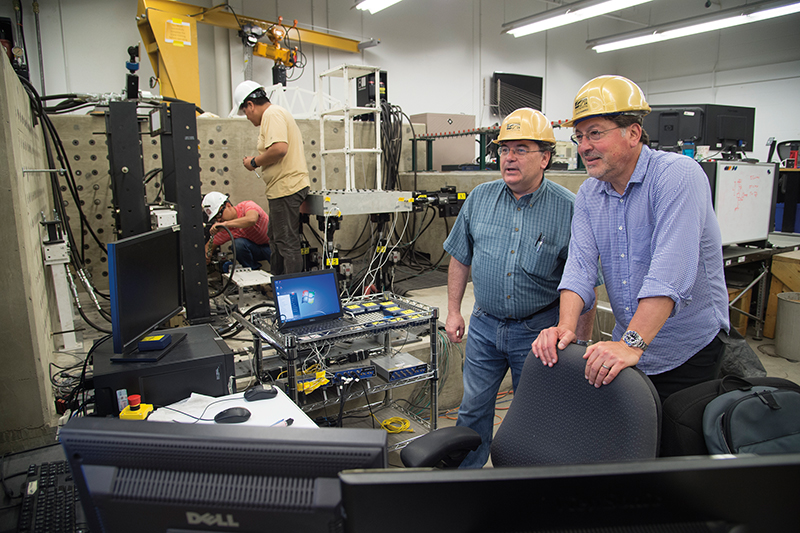 Purdue civil engineering professors Antonio Bobet, at left, and Julio Ramirez are heading up the NHERI NCO, headquartered at Purdue. In the Robert L. and Terry L. Bowen Laboratory for Large-Scale Civil Engineering Research, researchers in the Intelligent Infrastructure Systems Lab use a technique called hybrid simulation to test large- and small-scale structures like the one shown. (Purdue University photo/Mark Simons)

"Purdue was viewed as the most suitable institution to lead the community, coordinate the large investment of the NSF and to conduct education and community outreach activities of this research infrastructure," Ramirez said.

From 2009 to 2014, Ramirez served as director for NSF's George E. Brown Jr. Network for Earthquake Engineering Simulation, a $105 million grant aimed at mitigating earthquake damage. The NHERI grant is multihazard, combining investigations from the earthquake, wind and coastal engineering and social sciences communities.

Along with the NCO, the NHERI network consists of eight experimental facilities, a cyberinfrastructure platform for collaboration and a simulation center - components located at universities around the country.

"The NHERI NCO will lead the engineering community into adopting sustainable multihazard approaches," Ramirez said. "With NEES, our focus was earthquakes and associated natural hazards such as tsunamis and landslides. With NHERI, we focus on windstorms and associated hazards such as coastal storm surge and inundation, too. Things that we've learned in earthquake engineering can be applied to engineering for windstorms and vice versa. 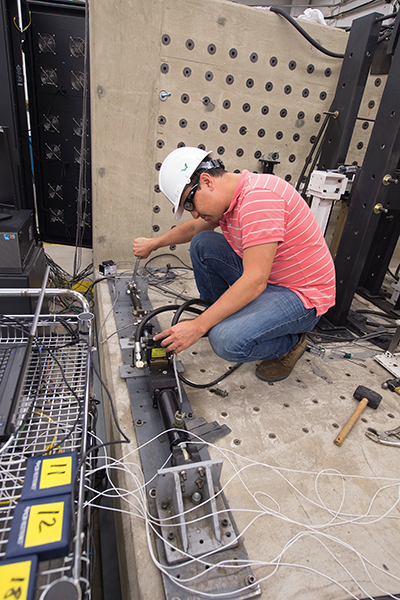 "Most importantly, we want engineers and scientists to become multihazard in their thinking, to approach resilience of communities as a whole."

The first step for the Purdue-based NCO is to lead the community and the other NHERI awardees into developing NHERI's formal research agenda, a five-year science plan, Ramirez said.

"It's an articulation of the priorities, grand challenges and the key problems we're going to solve," he said. "This science plan, developed by the research community, will in turn become the research agenda that NSF and other agencies will fund to make our infrastructure safer against windstorms and earthquakes. One of the key goals is to bring together those two very different research communities, people formerly working on the separate paths of earthquake and wind engineering."

The NCO team also will work with NHERI's experimental facilities to ensure the efficient testing of new technologies within a safe environment, to centrally coordinate testing schedules, and to facilitate shared technical knowledge and best practices. Other key NCO efforts are to lead NHERI education and outreach and develop strategic partnerships around the world to form a cohesive, global natural-hazards engineering research infrastructure.

Additional key senior personnel are practicing earthquake engineer William Holmes, who has extensive experience in developing codes and guidelines; architect Thomas Smith, who has expertise in windstorm damage; Cheryl Ann Blain, a research oceanographer of the Naval Research Laboratory, Oceanography Division, who is an expert in the application of numerical models based on unstructured grids to coastal dynamics, numerical tide and storm surge modeling; and professor Ian Robertson, of  the University of Hawaii, Manoa, who is an expert in tsunami and coastal engineering research.