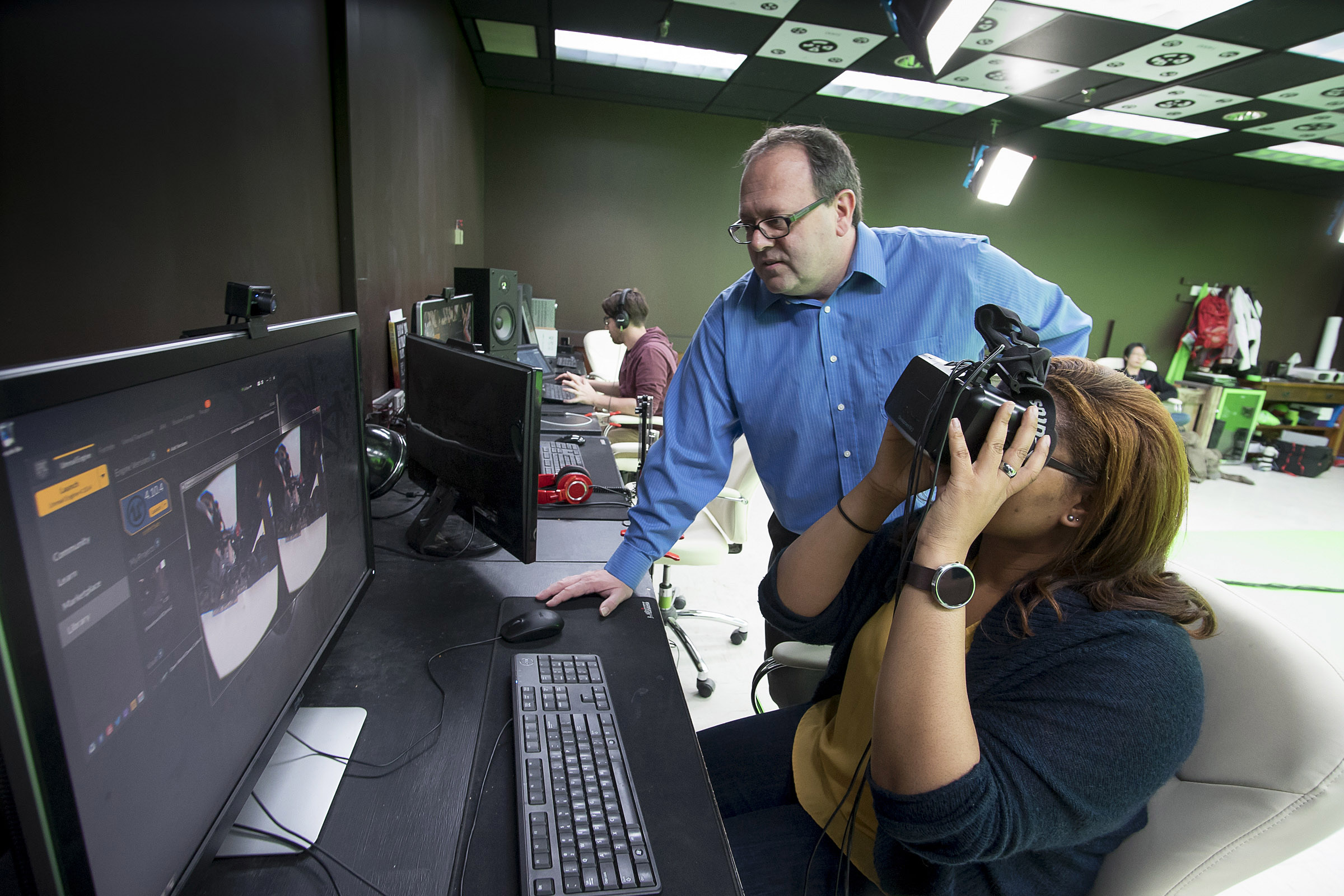 David Whittinghill, works with Richelle Fosu, a doctoral student in technology at Purdue, researching different applications that could benefit from the use of a virtual reality nose. The virtual reality nose could be implemented in to a variety of different applications and video games, or anywhere someone is trying to create an immersive experience. (Purdue Research Foundation image)

Startup Virtualis LLC is commercializing innovations developed at Purdue University that could allow better virtual reality experiences for users, decreasing the effects of VR sickness and increasing the amount of playtime, helping to make the year of virtual reality a reality.

Virtualis LLC, a startup founded by David Whittinghill, an associate professor in Purdue’s Polytechnic Institute, is commercializing a virtual nose that could help combat virtual reality sickness. The virtual nose, named nasum virtualis, is embedded into the users' field of view to act as a fixed point of reference to ease virtual reality sickness. This screenshot is from one application where the user rides a roller coaster. (David Whittinghill/Purdue University image) Download image

Whittinghill said that VR sickness is not a unidimensional problem.

"Motion-to-photon latency, which is the time it takes for you to turn your head and the screen to refresh at the same rate, is one of the main culprits of VR sickness. If latency is present then the photons that represent the scene strike your retina out of sync with your head's motion. This lag causes your body to react negatively, inducing vertigo and sometimes nausea," he said. "Another factor is dissonance between the inputs received by the vestibular and visual systems. We call motion in virtual spaces vection. Vection is when your body moves forward and backward, left and right, or up and down, as opposed to rotating in a fixed position. The VR developer community has put forth a set of app design principles that recommends users primarily rotate in the virtual space rather than allow free vection. Discouraging vection reduces the degree of dissonance between the ocular and visual systems, and thus helps avoid simulator sickness."

Implementing these design principles also restricts the possibility space enormously. For a huge percentage of existing video games, the entire point of the game is to vection through a virtual space while navigating enemies and obstacles. Removing these kinds of experiences entirely from VR is extremely limiting, he said.

Whittinghill said that he and his team of undergraduate students were disappointed to find they all experienced virtual reality sickness after trying a VR device for the first time.

"We were all very excited to try our brand new VR headset. However, we were extremely disappointed to find that we all got fairly sick when we tried out pretty much anything with it," he said. "It really surprised me, in particular, because I like theme park rides and I generally have a pretty high tolerance for motion sickness. I didn't expect to have such an immediate response. It was really intense."

Whittinghill said that while brainstorming with his research team they came up with a potential solution.

"One of my students mentioned that in a game he had recently played there was a fixed cockpit that acted as a point of reference and it seemed to have eased the sickness a bit. We hypothesized that if you had a fixed reference in your view point you would do a lot better with sickness. Of course we realized a cockpit wasn't going to work for every game, so after hitting the research literature on perception, and working through a bunch of ideas we eventually decided to try inserting a nose into the user's field of view," he said. "For instance, in the animal kingdom every terrestrial predator can see its nose, so if it were a problem it seems like it would have evolved out. We surmised that being able to see one's nose was likely adaptive – a feature rather than a bug."

Whittinghill and his research team conducted experiments that involved two groups of people who experienced a virtual reality roller coaster ride, an event deemed likely to cause a high simulator sickness reaction. Group one could see a virtual nose in their screen, like you would your own nose, and group two could not. The findings showed that group one experienced less sickness and increased participation time in the simulation than did the second group who could not see the virtual nose.

"What was interesting was that when we asked how distracting the nose was, the participants were baffled because they didn't even realize the nose was there. Just like one's own nose they didn't perceive it," he said. "We observed a 13.5 percent drop in severity of sickness and an increase of time in the simulator, just by adding a simple component that doesn’t interfere with the game and is computationally very cheap."

"It sounds Latin, but it's honestly completely made up," he said. "The team dreamed up the phrase and liked the sound of it, and it just kind of stuck."

Whittinghill said although the technology will ultimately benefit virtual reality end users, he believes content producers, game engine companies or possibly VR headset manufacturers will be the ones most likely to adopt the product.

"I think our technology is well suited for larger companies who produce VR products. They have the ability to license the technology and include it into their application program interface which would make it available to virtual reality developers," he said. "Our technology is definitely not limited to just video games, though that is a vast market. Anywhere someone is trying to create an immersive experience, this could really help out and provide a better experience that people can actually enjoy and use again."

Virtualis is a member of the Purdue Startup Class of 2016. Purdue has 27 startups based on Purdue intellectual property that were launched in the 2016 fiscal year. A video on Virtualis LLC can be found at https://youtu.be/e9Vh922tl8Y.

Whittinghill credits Purdue Foundry, an entrepreneurship and commercialization accelerator at Purdue, for helping to expedite the company development process.

"I went through the Foundry Launchbox program which was great and really helpful to understand the startup process," he said. "I'm going through the Purdue Foundry customer discovery program. Having these resources at hand is really great for the startup community."

Virtualis' virtual reality nose is patented through the Purdue Office of Technology Commercialization and currently available for license. The company is continuing research to develop other technologies that could help combat VR sickness and is also developing original VR and game-oriented experiences. The company seeks funding to continue research, cover operating expenses, and help grow its staff.

"The virtual reality nose is not the only approach we have," Whittinghill said. "Although we have received a lot of great feedback and interest in it, we realize that it's not going to completely solve the problem for everyone. We are excited to continually work on other solutions so that we can create better, more engaging virtual reality experiences."