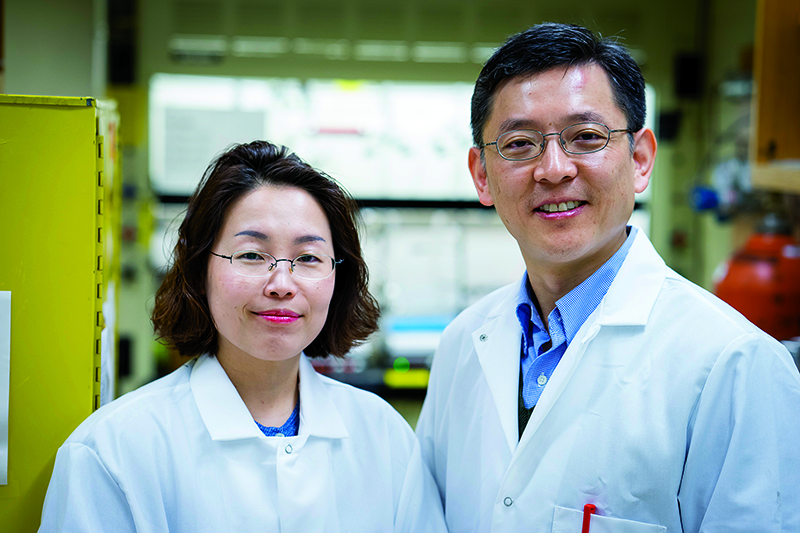 Rachel Kim, an MBA graduate from MIT Sloan, and You-Yeon Won, a professor in Purdue's School of Chemical Engineering, are developing a nanoparticle ultraviolet radiation technology, named Radio-Luminescent Nano Particles. The technology could replace chemotherapy drugs to enhance the cancer cell killing effect of radiation in a non-toxic way, minimizing radiation doses and patient side effects. Won and Kim have started the company Lodos Theranostics to further develop and commercialize the technology. (Purdue Research Foundation photo)

"Annually in the United States about one million cancer patients receive radiation treatment and about half of those patients qualify for radio sensitization treatments where they receive additional agents to enhance the radiation effect. Chemotherapy drugs, the agents typically used, even if locally administered to the tumor tissue, spread and produce side effects in other normal tissue regions, unavoidably adding side effects to side effects," Won said. "Our UV nanoparticle technology could be used in place of the chemotherapy drugs to enhance treatment effectiveness in a nontoxic way, while lowering overall radiation doses, which will, in turn, minimize side effects such as nausea, dizziness, various pain, radiation burns and bruising."

Radiation methods such as X-rays or gamma-rays are typically used in treatment because they are able to penetrate cancer in deep tissue regions. UV light, however, is a low wavelength light that has a shallow and narrow penetration length of less than a millimeter below skin, typically a few hundred micrometers in human tissue, so it cannot be used alone to be effective in treating cancer tumors.

Won said the company's technology, Radio-Luminescent Nano Particles, is able to supply a secondary source of radiation to solid cancer tumors, which at a given radiation dose can significantly enhance the cancer cell killing effect of radiation.

"X-ray and gamma-ray beams provide the primary source of radiation in treatment but it passes through a lot of normal cells, which is the main reason why patients experience bad side effects," he said. "The nanoparticle we've formulated is able to produce a localized UV light under high energy radiation only within the cancer tissue, bypassing the normal cells and enhancing the effectiveness of the treatment."

Lodos Theranostics uses a nanoparticle that is encapsulated within an already FDA approved, nontoxic material. The particle itself is a stable inorganic material which is made from naturally abundant minerals.

"I've been doing cancer nanotechnology research for the past 10 years. A few years ago our laboratory developed a DNA carrier that becomes dissociated under UV irradiation. In order to make this UV approach applicable to clinical situations, we started thinking about how we can irradiate deep tissue by UV light, so we came up with the idea of using UV-generating materials," he said. "While experimenting with cancer cells under UV light, we observed that cancer cells become very vulnerable and die under UV radiation. All these pieces sparked the idea that UV-generating particles could be used on their own for cancer treatment.

"In fact, people have known for more than 50 years that X-ray beams kill cells much better when combined with UV light, but I believe no one before us has ever thought about using UV light in clinical radiation therapy."

Won said the technology is completely compatible with the previously established radiation treatment protocols as well as all equipment infrastructures.

The company is in the process of conducting pre-clinical trials to collect enough information to plan, design and conduct a full-scale animal clinical study and eventually human clinical trials.

"Through studies in cell cultures and cell implants in mice, we have confirmed that our nanoparticle formulations are nontoxic. We have also confirmed the significant effects of our nanoparticles in enhancing the cell killing of high energy radiation," Won said. "We have recently received approval to start animal clinical trials at Purdue's College of Veterinary Medicine in collaboration with Purdue veterinarians, and we are ready to recruit animal cancer patients, dogs and cats with late-stage cancer for this pilot study to be able to further prove its effectiveness and gather relevant pharmacological information."

The company is also a client of Purdue Foundry, an entrepreneurship and commercialization accelerator located on the Purdue campus.

"I attended the Launch Box program at Purdue Foundry and still receive help from them, which has been tremendous," Won said. "The entrepreneurs-in-residence we were connected with have become our company advisers and I don't think we would be where we are if it weren't for their help."

The company plans to apply for federal grants to fund their continuing research and eventually raise money from private investors to help grow the company later this year. Long-term, Lodos Theranostics would welcome a partnership with a company who has expertise in conducting human trials, to further develop and test their technology.

LoDos Theranostics is an Indiana-based small business founded in March 2015. Working with its research partners at Purdue University, LoDos is developing an entirely new technology for making cancer treatment with radiation therapy safer and more effective.