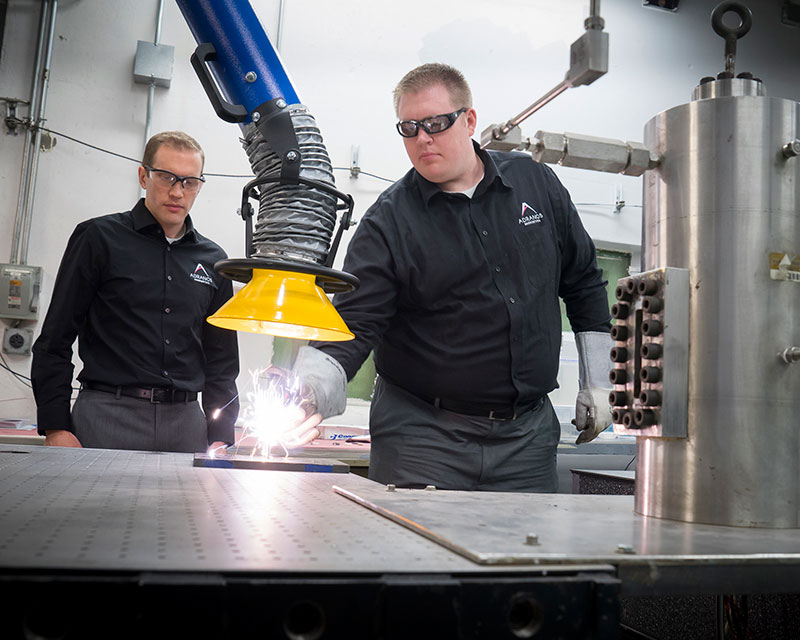 WEST LAFAYETTE, Ind. – A Purdue-related startup is developing a new rocket fuel formulation that could make rockets used in military and space applications, travel further, carry greater payloads and be safer for the environment.

Stoker said that rocket fuel hasn't changed in the last 60 years and has two major defects: inefficiency and its detrimental effects on the environment.

The U.S. Department of Defense and U.S. allies could use the rocket fuel, Terry said.

"Using our propellant, rockets could fly much farther and with a greater explosive power, keeping soldiers at a greater and safer distance," he said. "Our propellant could not only protect the life of the war fighter by giving him a competitive advantage but also reduce corrosion to the equipment, saving significant amounts of money."

Stoker said the technology could also be valuable in space-exploration applications.

"One of the issues preventing space flight is cost," Terry said. "With our technology we can reduce those costs significantly, enabling space flight and putting more satellites into orbit."

The company is in the lab-scale testing stage and has shown increased performance and elimination of hydrochloric acid in small-scale propellant combustion.

"Right now we are conducting tests to prove that the technology works as the rockets scale in size. We are currently proving functionality and performance characteristics in rocket motors that are three inches in diameter and 15 inches in length, and we will eventually scale to rocket motors that are five inches in diameter and five feet in length,” Stoker said. “Compelling results from these tests could open doors for our fuel to be adopted for use in a variety of space-launch and missile systems."

Adranos Energetics won the Gold Division of the 29th annual Burton D. Morgan Business Plan Competition at Purdue, receiving $30,000 in funding. The company also placed first in the University of Oregon's 25th New Venture Championship and first in the graduate division of the University of Nebraska-Lincoln's Global New Venture Competition, receiving $25,000 and $10,000, respectively.

Technology used by Adranos Energetics LLC has been licensed through the Purdue Research Foundation Office of Technology Commercialization. Adranos is a member of the Purdue Startup Class of 2016. Purdue has 27 startups based on Purdue intellectual property that were launched in the 2016 fiscal year. A video of the company can be viewed here.

Adranos Energetics is currently utilizing lab space in the Maurice J. Zucrow Laboratories, which is affiliated with the Purdue School of Mechanical Engineering and the School of Aeronautics and Astronautics.

The company is seeking $500,000 to $1 million in additional funding to reach the end of phase two, which would allow the company to prove tactical validation in actual missile systems or in other real-life, large-scale rockets, over the next few years.

Adranos Energetics LLC, is a company that is focused on developing the next generation of propellants, explosives, and other energetic materials. Adranos is currently working on a cost-effective solid rocket propellant that is more efficient, more powerful, and better for the environment than traditional solid propellants.