Purdue professor recognized with one of the state's highest honors 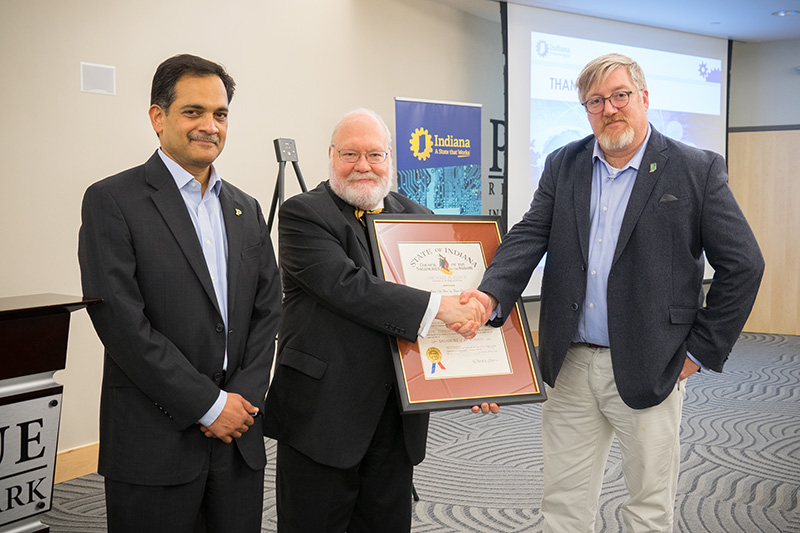 Eugene H. Spafford (center), a professor in the Department of Computer Science, received the Sagamore of the Wabash during a ceremony Friday (Nov. 18) at the Purdue Research Park. Pictured with Spafford are Suresh Garimella (left), Purdue's executive vice president for research and partnerships, and Douglas Rapp, adviser for cyber and national security initiatives at Indiana Economic Development Corporation. (Photo by Vincent Walter) Download image

Eugene H. Spafford, a professor in the Department of Computer Science, received the Sagamore of the Wabash during an afternoon ceremony at the Purdue Research Park.

Spafford thanked his past and present colleagues and students who worked with him, and contributed to his accomplishments.

"As an early leader in this area, I am grateful to be recognized for how my efforts have helped make a difference in Indiana, as well as nationally and internationally," he said. "However, I hope no one thinks the problems are solved or that I'm done working in the field. Better cyber security and privacy are needed more now than ever before."

The event was part of the state's Cybersecurity Town Hall meeting. The meeting, a program with the Indiana Economic Development Corp., explored ways that Purdue can support the state's commercial businesses in security, resiliency, privacy and cybercrime.

The Sagamore of the Wabash Award, established by then-governor Ralph Gates in the 1940s, is a tribute to those who have rendered distinguished service to the state. Astronauts, presidents, artists and ordinary citizens have all received past awards.

Spafford came to Purdue in 1987. Since that time, he has earned numerous awards in the cybersecurity community and at the university, becoming one of Purdue's inaugural Morrill Professors in 2012.

Among his accomplishments is his leadership in the Center for Education and Research in Information Assurance and Security. Spafford was a founder of CERIAS in 1998 and remains as director emeritus.