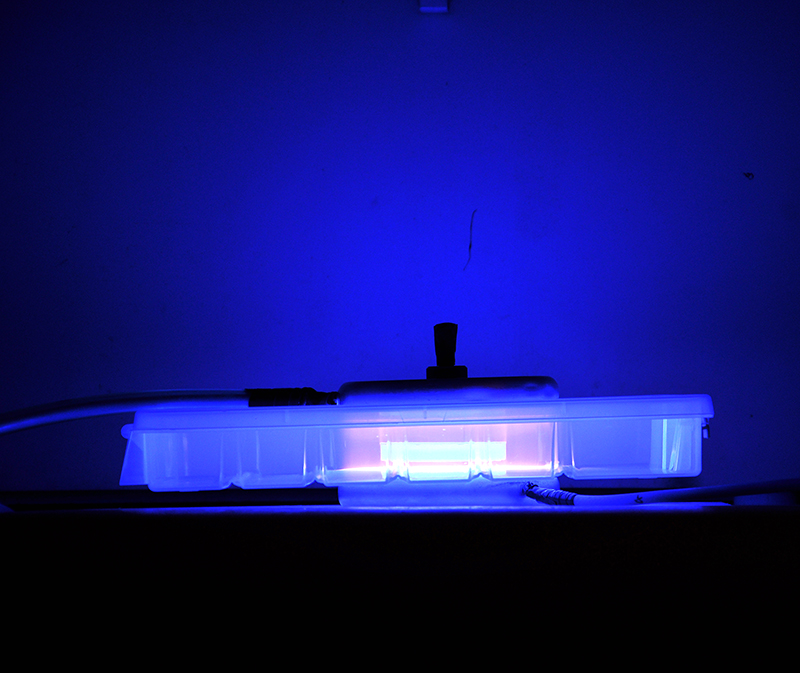 During the high-voltage atmospheric cold plasma treatment, tens of chemical reactions take place each second within the plasma chamber, creating light energy emissions that the researchers can measure to identify what reactions are taking place. (Purdue University / Ximena Yépez)

WEST LAFAYETTE, Ind. - Two Purdue University researchers have developed a hydrogenation process that could solidify soybean oil for food processing without creating trans fats, which have been linked to heart disease and stroke.

Hydrogenation is a chemical process that transforms liquid vegetable oil to a solid or semisolid state - useful for creating food products like vegetable shortening and margarine. However, the intense heat required in the conventional hydrogenation process causes the formation of harmful trans fats, which can raise cholesterol levels and lead to heart disease and diabetes. Because of this, the U.S. Food and Drug Administration removed partially hydrogenated oils (PHOs) from the list of safe foods in 2015. Some food manufacturers now use palm oil and other imported oils that do not require hydrogenation, rather than less expensive soybean oil.

Traditional hydrogenation processes rely on a catalyst, high pressure and high temperatures to separate molecular hydrogen into atoms, Yépez said, but the HVACP process bypasses the catalyst and uses high-voltage electrical discharges to separate the molecules. Once the hydrogen molecule is split, each atom attaches to the double bonds between the molecules in the oil, giving them more structure. More structured molecules cause the oil to become more solid, or "saturated."

"Cold plasma processes are being researched in many different fields," Yépez said. "They're used in things like fluorescent lighting, or in changing material properties, like increasing conductivity. Dr. Keener developed this method in food science to eliminate pathogens. But as far as we know, no one has ever used this technology to hydrogenate oil before."

The HVACP experimental design consists of a small amount of oil placed inside a plasma-filled container, which is then placed inside a bag filled with a hydrogen-blend gas. As the gas fills the bag, two electrodes discharge up to 90 kilowatts of electricity through the chamber, splitting the hydrogen molecules in the gas into ions. These ions bond with the double bonds in the fatty acid molecules on the surface of the oil.

Currently, a typical hydrogenation reaction might produce only a 3 percent increase in saturated fatty acids while increasing the formation of trans fats by up to 40 percent. But after a 12-hour HVACP treatment, the oil showed a 32.3 percent increase in saturated fatty acids and no trans fats. This ratio not only means that the finished product is safer for human consumption, Keener said, but also that the HVACP process is more efficient than traditional processes.

"Because there is no requirement for pressure, catalyst or heat, this process requires up to 50 percent less energy than the current process," he said. "If you wanted to adapt this for commercial use, you would not be limited by power."

The researchers said that two main obstacles still exist in adapting the process for commercial use. The first is that the HVACP procedure yields a small amount of byproduct that the researchers have not yet identified. This could be an alternate form of trans fat or a similar substance, said Yépez. The team will manipulate the parameters of the experiment to better understand where the substance comes from and what it might be.

The second obstacle the researchers face is speed. While the process creates more product than heat-based hydrogenation, it is much slower. Yépez and Keener are trying several approaches to make the process faster, including increasing the amount of electricity discharged through the chamber and spraying the oil into the chamber as droplets.

By achieving a realistic speed for the process, Keener's vision is to make the HVACP process an efficient and viable option to create safe PHOs for commercial food production.

"Some of the methods we're investigating could reduce hydrogenation time to a matter of minutes," Keener said. "Then you could replicate these modules - create a hundred or a thousand of them. And the process isn't just limited to food oils. We can manipulate the chemistry of any oil, plant-based or industrial.

"This process could enable us to produce hydrogenated plant oils in an environmentally friendly way that would be sustainable for the long term."

This study was funded internally from Purdue University discretionary funding, and Yépez is funded by a grant from the office of the Secretary of Higher Education, Science, Technology and Innovation of the government of Ecuador. Yépez is a doctoral student in the Whistler Center for Carbohydrate Research, a university-industry partnership that supports research on practical applications of carbohydrates.

Fats and oils are essential ingredients in the food industry. Partially hydrogenated oils (PHOs) have a high content of trans-fatty acids, which have been linked to cardiovascular diseases. High-voltage Atmospheric Cold Plasma (HVACP) is investigated to produce partially hydrogenated soybean oil without the formation of trans-fatty acids. In this study, soybean oil was exposed to highly energized species from hydrogen and nitrogen. HVACP treatment of soybean oil reduced iodine value from 133 to 92 over a 12-h treatment. Such iodine value reductions are similar to the traditional soybean oil hydrogenation process. Saturated fatty acids increased 12%, monounsaturated increased 4.6%, and unsaturated fatty acids decreased 16.2%. No measurable trans-fatty acids were detected. Atomic hydrogen species are likely responsible for the HVACP hydrogenation, and were identified with optical emission spectroscopy. Through this innovative technology, chemical synthesis of PHO's can be achieved in a non-traditional manner without trans-fatty acids. Industrial relevance: HVACP has been extensively studied to achieve food decontamination using nitrogen, oxygen, and carbon dioxide gas blends. The use of this technology with hydrogen gas demonstrates further possibilities in room temperature chemical synthesis. In this study, the application of HVACP was aimed to affix hydrogen atoms at the double bonds of unsaturated fatty acids. The advantages of the HVACP technology over the current hydrogenation processes are that the former can be performed with the following conditions: (1) at room temperature, (2) under atmospheric pressure, and (3) catalyst-free. Bakery products, frozen meals, desserts, and several snacks are the most challenging products for reformulations replacing PHOs. This technology is relevant because it may lead to an increase of the use of local vegetable oils, whose unsaturated fatty acid contents can be chemically modified without the formation of trans-fatty acids. Furthermore, this technology could be broadly used to selectively hydrogenate for various industrial purposes, producing new chemical structures without the requirements of heat, pressure, or catalyst. This study is the first study demonstrating an alternative processing technology to traditional catalytic hydrogenation. Additional research is needed to optimize the treatment process, and evaluate the performance of the HVACP partially hydrogenated oil.