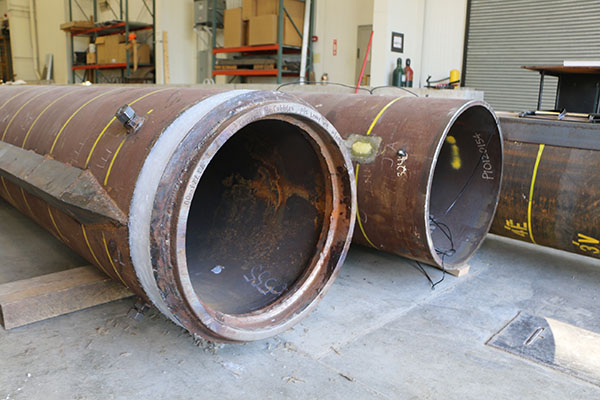 These open-ended pipe piles, about 100-feet long and two feet in diameter, will be used to test a type of bridge pile often seen in offshore applications, research that could help reduce the cost of bridge building or replacement of aging spans. Engineers at Purdue University are leading a project with the Indiana Department of Transportation. (Purdue University photo/Erin Easterling)

WEST LAFAYETTE, Ind. — Civil engineers at Purdue University are leading a project with the Indiana Department of Transportation to learn how to use a type of bridge pile often seen in offshore applications, research that could help reduce the cost of bridge building or replacement of aging spans.

The piles will be used in the foundations of a bridge spanning the Wabash River near the Purdue campus on the eastbound side of Sagamore Parkway in West Lafayette, Indiana.

Called large open-ended pipe piles (LOEPPs), the lengths of steel pipe about 100 feet long and two feet in diameter will make up the bridge's center piers. One advantage of pipe piles is that they can be driven into the riverbed's alluvial soil easier than the traditional closed-ended piles, which will be used for the end piers, said Rodrigo Salgado, the Charles Pankow Professor in Civil Engineering in Purdue's Lyles School of Civil Engineering.

He is leading the research with civil engineering professor Monica Prezzi, working with doctoral students Eshan Ganju and Fei Han. The project also involves engineers at INDOT through the Joint Transportation Research Program at Purdue.

"INDOT engineers have a long history of working with Purdue to jointly develop and evaluate innovative engineering approaches," said Darcy Bullock, a professor of civil engineering and director of the Joint Transportation Research Program. "These types of field experiments are a critical step in implementing engineering innovations."

The researchers have built a specially designed double-wall test pile containing an inner and outer pipe, one slid into the other. Because the two segments are connected only at the top, they can deform independently, a design that makes it possible to measure precisely and separately the forces exerted by the soil on the internal and external surfaces. A YouTube video is available at https://youtu.be/IlWj13whIMQ.

Large open-ended piles have been used in offshore applications such as wind turbines and oil platforms, and INDOT is exploring how to use them more frequently for structures on land. Because the pile is larger than conventional piles, fewer of them are needed, potentially bringing lower-cost bridge construction.

"If capacity is high enough, they can offer a very economical way to build bridges," Prezzi said.

However, little is known about how the piles behave as they are driven deep into the ground. The process, depending on the density and stresses in the soil and on the internal diameter of the pile, can cause a dense plug of soil to form in the bottom of the pile, changing how it behaves. Two types of sensors placed at one-foot increments along the length of the pile will provide data to determine precisely how much strain is generated in the internal and external pipes of the double-wall pile. Data will be considered in the final design of the foundations for the bridge.

As the open-ended pipe is driven into the ground, the soil causes differing resistance on the outer and inner walls of the pipe.

"These open-ended piles derive their resistance from the complex interaction of the pile with the soil plug that enters it," Salgado said. "We will learn how much soil goes into the pile and how much resistance you develop as the plug becomes denser. We will also learn how the plug affects the pile response during driving, under dynamic loads, and during static loading through the load test that will be performed."

Sensors are placed on both inner and outer walls of the test pile, allowing the researchers to measure how much of the load is transferred to the soil as the pile is being driven into the ground and also later, during static load tests. At the same time, the researchers will study a second test pile that has a closed end, allowing a direct comparison. Unlike the open-ended piles, the closed-ended pile contains a pointed shoe at its base.

"What's unusual and possibly unique is that we will have instrumented large-diameter closed- and open-ended piles installed at the same site so we will be able to directly compare," Salgado said.

The more than 200 sensors used to instrument the piles will be linked to a data acquisition system by 24,000 feet of electrical cables.

The plug's movement into the pipe also will be measured using a pulley-operated gauge.

"This is cutting edge innovation that has been made possible through the ongoing investment in JTRP and the teamwork of INDOT staff and world class researchers," said Timothy J. Wells, an engineer and manager of INDOT's Transportation Systems Research Section.

The project is providing an unusual opportunity for doctoral students.

"It's very rare for Ph.D. students to have the possibility of doing high-quality, large-scale research like this in the field," Salgado said.

The fabrication of the double-wall open-ended pipe pile and the instrumentation of both test piles was performed at Purdue's Robert L. and Terry L. Bowen Laboratory for Large-Scale Civil Engineering Research.

Note to Journalists: A YouTube video is available at https://youtu.be/IlWj13whIMQ. Other videos and images are available on Google Drive at https://goo.gl/Exv3ld​​. The materials were prepared by Erin Easterling, a digital producer in Purdue's College of Engineering, 765-496-3388, easterling@purdue.edu