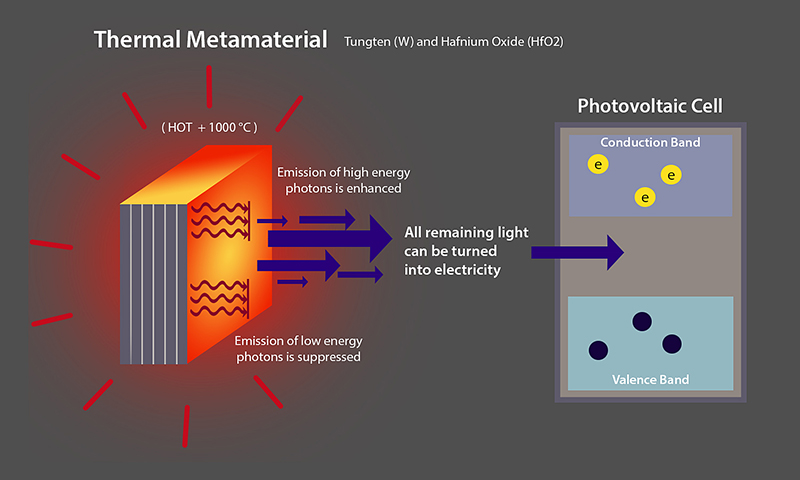 The thermal metamaterial represented in this graphic could make possible more efficient thermophotovoltaic devices that generate electricity from thermal radiation. Such a technology might be adapted to industrial pipes in factories and power plants, as well as on car engines and automotive exhaust systems, to recapture a portion of the energy wasted as heat. (Purdue University image/ Gabriela Sincich and Matthew Bollinger)

WEST LAFAYETTE, Ind. – An international research team has used a "thermal metamaterial" to control the emission of radiation at high temperatures, an advance that could bring devices able to efficiently harvest waste heat from power plants and factories.

Roughly 50 to 60 percent of the energy generated in coal and oil-based power plants is wasted as heat. However, thermophotovoltaic devices that generate electricity from thermal radiation might be adapted to industrial pipes in factories and power plants, as well as on car engines and automotive exhaust systems, to recapture much of the wasted energy.

In new findings, researchers demonstrated how to restrict emission of thermal radiation to a portion of the spectrum most needed for thermophotovoltaic technology.

"These devices require spectrally tailored thermal emission at high temperatures, and our research shows that intrinsic material properties can be controlled so that a very hot object glows only in certain colors," said Zubin Jacob, an assistant professor of electrical and computer engineering at Purdue University. "The main idea is to start controlling thermal emission at record high temperatures in ways that haven't been done before."

The thermal metamaterial – nanoscale layers of tungsten and hafnium oxide – was used to suppress the emission of one portion of the spectrum while enhancing emission in another. (An animation is available at https://youtu.be/mRhcNF1yyyU.)

Metamaterials are composite media that contain features, patterns or elements such as tiny nanoantennas that enable an unprecedented control of light. Under development for about 15 years, the metamaterials owe their unusual abilities to precision design and manufacture on the scale of nanometers.

"They have been used mainly to manipulate coherent light, as in a laser, but the ability to manipulate infrared thermal radiation at 1,000 C opens up new areas of research," Jacob said. "The technique we used to achieve this thermal suppression and enhancement is fundamentally different from existing thermal engineering approaches and harnesses a phenomenon called topological transitions."

The research represents the first time the approach was used for thermal emission in high-temperature metamaterials, also called refractory metamaterials.

"My student, Sean Molesky, theoretically predicted it in 2012, and it has taken about four years and some exceptional materials engineering from our collaborators to perform the high-temperature experiments and demonstrate the thermal metamaterial," Jacob said. 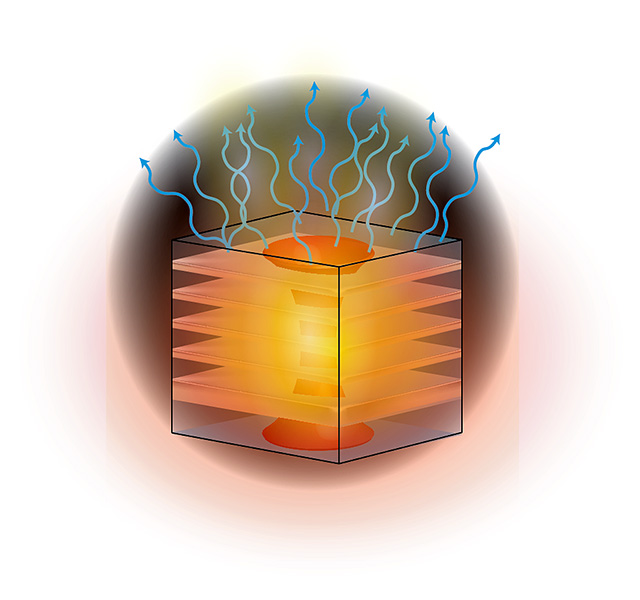 The basic operating principle of a photovoltaic cell is that a semiconducting material is illuminated with light, causing electrons to move from one energy level to another. Electrons in the semiconductor occupy a region of energy called the valence band while the material is in the dark. But shining light on the material causes the electrons to absorb energy, elevating them into a region of higher energy called the conduction band. As the electrons move to the conduction band, they leave behind "holes" in the valance band. The region between both bands, where no electrons exist, is called the band gap.

"If you have energy below the band gap, that is generally wasted," Jacob said. "So what you want to do for high-efficiency thermal energy conversion is suppress the thermal emission below the band gap and enhance it above the band gap, and this is what we have done. We have used the topological transition in a way that was not done before for thermal enhancement and suppression, enhancing the high-energy part of the emission spectrum and suppressing the low-energy thermal photons. This allows us to emit light only within the energy spectrum above the band gap."

Future research will include work to convert heat radiation from a thermal metamaterial to electron-hole pairs in a semiconducting material, a critical step in developing the technology. The thermophotovoltaic technology might be ready for commercialization within seven years, Jacob said.

A graphic depicting the high-temperature thermal metamaterial is available at https://www.purdue.edu/uns/images/2016/jacob-hyperboloidal.jpg

The research was funded by the German Research Foundation, National Science and Engineering Research Council of Canada, Alberta Innovates Technology Futures, and the Helmholtz-Alberta Initiative.

Note to Journalists: An electronic copy of the research paper is available by contacting press@nature.com or Emil Venere, 765-494-4709, venere@purdue.edu. An animation, available at https://youtu.be/dbePERsPh-g, was prepared by College of Engineering digital producer Erin Easterling, 765-496-3388, Easterling@purdue.edu

Control of thermal radiation at high temperatures is vital for waste heat recovery and for high-efficiency thermophotovoltaic (TPV) conversion. Previously, structural resonances utilizing gratings, thin film resonances, metasurfaces and photonic crystals were used to spectrally control thermal emission, often requiring lithographic structuring of the surface and causing significant angle dependence. In contrast, here, we demonstrate a refractory W-HfO2 metamaterial, which controls thermal emission through an engineered dielectric response function. The epsilon-near-zero frequency of a metamaterial and the connected optical topological transition (OTT) are adjusted to selectively enhance and suppress the thermal emission in the near-infrared spectrum, crucial for improved TPV efficiency. The near-omnidirectional and spectrally selective emitter is obtained as the emission changes due to material properties and not due to resonances or interference effects, marking a paradigm shift in thermal engineering approaches. We experimentally demonstrate the OTT in a thermally stable metamaterial at high temperatures of 1,000 °C.