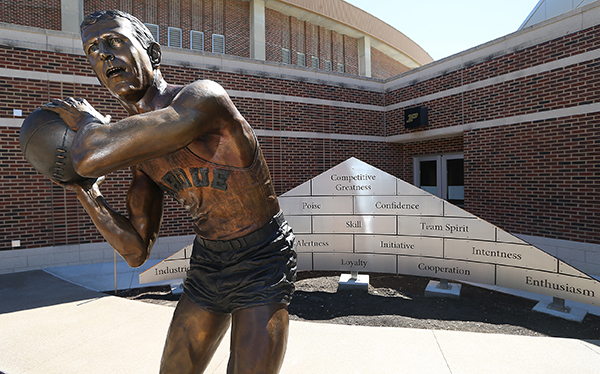 WEST LAFAYETTE, Ind. - Purdue University alumnus Jim Hicks had one simple reason why he sponsored a statue of UCLA basketball coach John Wooden to stand on Purdue’s West Lafayette campus, instead of in Los Angeles.

The 1961 Purdue agricultural economics graduate is a native of Morgan County, Indiana, as was Wooden, who was best known for a legendary coaching career at UCLA. A dedicated supporter of students’ educational, career and personal development, Hicks and his wife, Neta, donated $2 million in 2014 to create the Jim and Neta Hicks Endowment for Leadership in Agriculture, which will mainly support the College of Agriculture Transformational Experiences (CATE) program. Part of the gift was allocated for the creation of a 7-foot bronze statue of Wooden.

The statue, by Julie Rotblatt-Amrany of Highwood, Illinois, will be dedicated at 10 a.m. on Sept. 24 and will stand in the Sally & Bob Weist Plaza. Rather than portraying Wooden as a coach, the design pays homage to his days as a three-time (1930-1932) All-American player at Purdue. Wooden’s family provided feedback throughout the project and approved the final design, which depicts him in his Boilermaker uniform, holding the ball as if to pass.

The statue also includes Wooden’s most famous teaching mantra, the Pyramid of Success, which describes success as being built on a foundation of character qualities such as initiative, loyalty and team spirit. 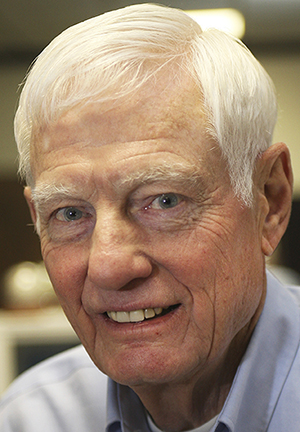 Jim Hicks, a 1961 Purdue graduate, and his wife, Neta, donated $2 million to establish the Jim and Neta Hicks Endowment for Leadership in Agriculture at the university. Part of the gift was used to fund the statue of John Wooden on the Purdue campus. (Purdue Agricultural Communication photo/Tom Campbell) Download image

''Not many people think of Johnny Wooden as a Boilermaker, but when I got here in 1957, some of the old-timers still remembered him as a player,'' Hicks said. ''I’m so delighted that people will see this statue and read his Pyramid of Success because I think the pyramid was his most important contribution.''

Hicks traveled from Indiana to California in December 1968 as a new district manager for what is now Chevron Corp., just a year after Wooden’s dominant UCLA teams began a string of seven consecutive NCAA men’s championships. Hicks, likewise, found success in California, eventually leaving Chevron to co-found one business and then launch his own wholesale fertilizer distribution company, Jim Hicks and Co., in 1982.

''Jim Hicks has been a great friend to the College of Agriculture and Purdue University for many years,'' said Jay Akridge, Glenn W. Sample Dean of the Purdue College of Agriculture. ''He has a deep passion for and commitment to our students and our educational programs, and his investments in scholarships and co-curricular activities will help us prepare the next generation of leaders. It is fitting that this leader and man of character would choose to fund a statue dedicated to an extraordinary Boilermaker leader and man of character, John Wooden.''

The CATE program, which received $1.75 million in the endowment that included the statue, is a collection of initiatives that take place outside the classroom, giving students real-world opportunities for leadership, community engagement and research. Programs under the CATE umbrella include the Molecular Agriculture Summer Institute, Leadership Development Certificate Program and Summer Undergraduate Research Fellowship program.

''Students are equipped to become leaders, to understand the value of agriculture and how we feed the world,'' said Kyle Bymaster, senior director of development for Purdue’s Agricultural Advancement Office, who worked closely with the Hicks and Wooden families throughout the project’s development. ''Just as John Wooden was a man of character, faith and commitment, Jim Hicks also believes in helping young people become well-rounded leaders who can make a difference in the world.  The inspiration of this endowment from Jim and Neta is not so much in the size of the gift, but rather the magnitude of impact it will have on many generations of students who will be the future leaders of our industry.''

Hicks said his motivation comes from seeing students move forward into leadership positions. ''I always say that my scholarship kids are the best and the brightest, and they will be running the industry long after I’m gone,'' he said. ''They all have good jobs and promising career trajectories. Some are managing, and several of them work for major agricultural companies.

''My wife and I wanted to give back and help others while we were living, so we could see the results of our expenditures, and we’re going to keep doing that - providing the good Lord is willing - for a few more years at least.''